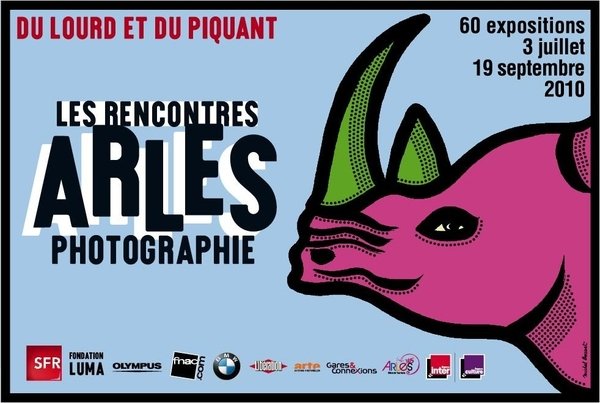 The Rencontres d’Arles 2010 feature six trails: through Argentina, rock music, and traditional film photography; with the friends of the LUMA Foundation; one about changes and changeovers; and a sixth on French prisons.
This 41st edition enjoys the expertise of twenty curators—heads of leading international institutions, artistic directors, and collectors. Each trail begins with a guest of honour or an emblematic show.

The Argentina Trail
The great visual artist León Ferrari is the Rencontres d’Arles’ guest of honour. The Venice Biennale awarded him its 2007 Golden Lion for a foreign artist. And after exhibitions at New York’s Museum of Modern Art and the Reina Sofia Museum in Madrid, his work will receive its first French outing at the Rencontres. The pretext for this retrospective is his subversive tweakings of photographs and postcards. Staged in the Chapelle Sainte-Anne by Argentinian curator Andrés Duprat, the exhibition consists of installations, drawings and sculptures that express the artist’s anti-clericalism and distrust of dictatorships.
Contemporary Argentinian photography, poised between the difficult and painful rendering of recent history and the search for a ‘Latino’ identity, is represented here by five other artists in the Pavillon des Forges at the Parc des Ateliers: Leandro Berra, Marcos Adandia, Gabriel Valansi, Marcos López and Sebastiano Mauri; and also elsewhere with Oscar Bony and Augusto Ferrari (both The Film Photography Trail) and David Lamelas (The Rock Trail).

The Rock Trail
In 1986, on Alain Dister’s initiative, the Rencontres d’Arles invited all the photographers covering the world rock scene. The ‘Rock et Photo’ programme marked a festival turning-point. But interest in photography today is more complex than a mere roll-call of photographer-fans. This year, we wanted to consider the relationship between rock music and photography, through:
- Mick Jagger, the most-photographed artist, who agreed to let the Rencontres create the first-ever exhibition retracing his career, as seen by the greatest portraitists, at the Eglise des Trinitaires.
- I Am a Cliché: Echoes of the Punk Aesthetic, illustrating punk rock’s influence on photographic and video creation from the 1960s to now, through the work of twenty artists chosen by Emma Lavigne, curator of contemporary art at the Pompidou Centre. - A retrospective of forty years of portraits by French pop and rock specialist Claude Gassian, in the form of an exhibition at the Atelier de Mécanique and an evening event at the Théâtre Antique.
- Jean Pigozzi gives Arles an exclusive viewing of forty years of shots among the jet set, whose life of parties and travel he shares. To coincide with his show, we dedicate an evening event to society photographers at the Théâtre Antique, directed by Jean-Jacques Naudet.

The Film Photography Trail
The rise of digital has caused the demise of certain methods and types of film. The Rencontres d’Arles 2010 have decided to spotlight the aesthetic consequences of these technological changes.
Unjustly-unsung Austrian Ernst Haas, the first photographer to harness Kodachrome’s fantastic potential, will show work selected by Bill Ewing, director of the Musée de l’Elysée in Lausanne.
The photographic shooting gallery: amazing self-portraits with rifle, taken by anonymous individuals and celebrities on fairground shooting stands in the mid-20th century, and their singular re-appropriation by contemporary artists. SHOOT! Existential Photography is curated by Clément Chéroux, photography curator at the Pompidou Centre, with Erik Kessels.

At the Palais de l’Archevêché, François Cheval, director of the Musée Nicéphore Niépce in Chalon-sur-Saône, has carte blanche to show multimedia tools—in the form of creations on first-ever display—that explain the photographic practices of the past.
The Polaroid collection is in jeopardy of being scattered. It is the only collection to record the entire history of a practice: Edwin H. Land initiated it as soon as his process was commercialised in 1947. William Ewing presents a selection at the Espace Van Gogh.

Old-fashioned photomontage, with scissors and glue, has been replaced by graphics palettes. Chinese artist Zhang Dali shows what was done in China, in the 1950s to 1970s, for political purposes: five years’ research has yielded dozens of doctored photographs and their originals, which he has analysed.
The last darkrooms around the world have been poetically photographed by Quebecker Michel Campeau.
To symbolically confirm the Ministry of Culture’s intention to decentralise part of the State’s photographic heritage to Arles, Anne de Mondenard proposes a selection of self-portraits from the nation’s collections.
The Tapestries Room of the Cloître Saint-Trophime hosts moving shots by Argentinian Augusto Ferrari, father of León. These served to prepare for the painting of murals at San Miguel Church, Buenos Aires.

The Friends of the LUMA Foundation Trail
This summer, the LUMA Foundation will provide a status report on the ambitious, generous project to rehabilitate the Parc des Ateliers, conceived primarily by architect Frank Gehry and landscapist Bas Smet, and initiated and sponsored by Maja Hoffmann alongside the PACA Regional Council and the City of Arles.
For the 2010 Discovery Award show at the Atelier de Mécanique, the Rencontres d’Arles are inviting five of the members of the LUMA Foundation’s ‘core group’ to select the fifteen exhibitions that will compete for the €25,000 prize. The core group comprises artists and curators from the international contemporary-art community: Tom Eccles, executive director, Center for Curatorial Studies, Bard College, New York; Liam Gillick, artist and faculty member, School of the Arts, Columbia University, New York; Hans-Ulrich Obrist, co-director of exhibitions and programmes, Serpentine Gallery, London; Philippe Parreno, artist; and Beatrix Ruf, director/curator, Kunsthalle, Zurich.
The LUMA Foundation, which has supported the Discovery Award and the two Book Awards since 2002, has now instituted the LUMA Award, which carries the same prize money as the Discovery Award. The 2010 winner will be chosen by Fischli & Weiss from among the fifteen artists on show; these two marvellous artists will also present an exhibition of their recent work—an exploration of art, laced with ambiguity and humour, that epitomises their talent.
Luke Fowler is invited by the LUMA Foundation to exhibit work at the Hôtel du Cloître.

The Changeover Trail
Film-maker Marin Karmitz, in collaboration with Christian Caujolle, presents the first-ever showing of his col- lection of direct photographs, videos and installations using photography, at the Eglise des Frères Prêcheurs. His approach, which connects eras and practices, is unusual for its long-term accompaniment of a dozen artists rather than sweeping a period or genre. Karmitz, who has became friends with the artists whose work he collects, acquiring certain series and so easing their production.
This collection is emblematic of how practices, from direct photography to installation, have evolved. It esta- blishes links between the increasingly varied worlds that make photography so fascinating. It is the headline show in this trail of work by young emerging artists, investigating the possible avenues that photography can travel. France 14 was conceived in Arles by fourteen guest photographers on Raymond Depardon’s programme in 2006. At the Abbaye de Montmajour they offer their own perspective on France, echoing the show scheduled this autumn at the French National Library about Depardon’s five-year public assignment.
The Eglise Saint-Blaise and the Couvent Saint Césaire, a new venue magnificently restored and made available by the City of Arles, bring together young artists in reGeneration2, featuring work by art and photography students from around the world. The project opens simultaneously at the Musée de l’Elysée in Lausanne and in Arles, thus celebrating the handover by the Swiss institution’s current director William Ewing to Sam Stourdzé, both friends of the Rencontres.
The SFR Young Talent Award is an interactive selection that has quickly fostered the emergence of young artists. Its judging panel is chaired this year by Isabelle Muñoz.
Paolo Woods explores the role of documentary photography today through his portraits of Iranian families in pa- rallel to the events in Tehran, covered by protesters using mobile phones and Twitter. Venue: Salle Henri Comte. At the Eglise Saint Blaise, the National School of Photography shows a selection of work by its 2010 graduates, and this summer we play host to new director Rémy Fenzy, who succeeds Patrick Talbot.
The 2009 winner of the Photo Folio Review, Lea Golda Holterman, will show work at the Espace Van Gogh, sup- ported by Fnac.

The Prison Trail
Because the Rencontres are, in their own way, a medium, an exhibition based on the report of the chief inspector of France’s ‘liberty-depriving facilities’ shows how French prisons are far from being an aid to reintegration in society, and invites spectators to escape received wisdom.

The programme is rounded off by various off-trail exhibitions:
Télérama magazine will celebrate its sixtieth anniversary at Arles with more than 3,000 covers, evidencing its successive editors’ attention to creative quality.
Russia Year in France provides the opportunity for an evening event and an exhibition co-produced with Olga Sviblova from the Museum of Photography in Moscow.
The annual ‘Clicks and Classes’ programme, produced in schools with the Ministry of Education. The National School of Photography in Arles will show work by seven artists travelling through town and country, at Galerie Arena.
Le Méjan shows artists recently published by Actes Sud, and pays tribute to photo developer and printer Picto on its sixtieth anniversary, at Le Magasin Électrique.
The extended opening week means we can fit in more platform events with artists and curators. A colloquium, co- organised with Connaissance des Arts and featuring experts from many different backgrounds, will ask whether the photography/contemporary art distinction still makes sense. Another colloquium on exclusion and poverty will run for the first time at three of the region’s festivals: Aix en Provence (opera), Avignon (theatre) and the Rencontres d’Arles, thus kicking off a new ‘3A’ collaboration.
The Night of the Year returns to the city centre, in the quarter of La Hauture; there will be more workshops, with higher capacity; the Photo Folio Review will run for ten days; and ‘Back to School with Images’ will welcome nearly 10,000 young visitors and their teachers, thanks to the week-long festival extension in September. I wish to thank the creators, curators and collectors who have worked so hard to prepare this edition with the Rencontres team, whose enthusiasm and dedication can never be overstated. Their efforts are backed by the precious loyalty, despite the economic crisis, of our public and private partners.

Together they propose an array of viewpoints—aesthetic perspectives that are in turn serious, contradictory, unexpected, exhilarating, and abundant. They add up to a festival both heavy duty and razor sharp, like this year’s rhinoceros mascot, for the pleasure of our artists and visitors.

Opening Days July 3rd to 13th
All the locations