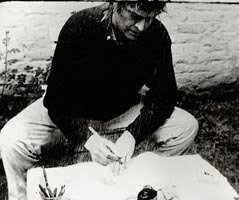 Index shows works by Marcel Broodthaers (Belgium, 1924-76) and Karl Larsson (Sweden, born 1977) in an exhibition entitled Parrot. Marcel Broodthaers was a poet, filmmaker and one of the 20:th century's most important European conceptual artists. This will be the first time the artist's works are presented in Sweden since the exhibition at Moderna Museet in 1982. Marcel Broodthaers is probably best known for a wider audience for his Musée d'Art Moderne, Department des Aigle, 1968, a conceptual museum shown in sections between 1968 and 1971. This initiative has been associated with the late 1900s global spread of installation art, as well as the impact of institutional critique in the context of contemporary art practise. Therefore it can be said that Broodthaers’ ideas have had a far-reaching implication for how interrelationships between art, artist and museum can be understood today.

The exhibition’s presentation of Marcel Broodthaers is concentrated in view of his intense and short but comprehensive and complex oeuvre. Three works by Broodthaers create an associative context which is commented on by the second artist exhibiting in Parrot, Karl Larsson. Broodthaers’ works La souris écrit rat (1974, graphic print), ABC - ABC Image (1974, slide installation), and La Pluie (Projet pour un texte) (1969, 16mm film, b/w), are works where Broodthaers are exercising his personal method of playing with an understanding of words and text references. These works are sided by Karl Larsson's interventions in terms of spatial constructions and sculptural objects. By serving as co-curator with Index, Larsson has been part of creating the conditions for viewing the works, for their compilation and how they are commented, the latter also in the format of an integrated series of lectures that puts the light on Marcel Broodthaers activities, both as poet and visual artist.

As a part of the project Karl Larsson is presenting a newly written collection of poetry with the same title as the exhibition. A book can be seen as a form that can harbour, generate, and repeat poetic statements. The perspective of the parrot that Larsson has chosen to take in his work with the exhibition is based on the idea of how the parrot's body is inhabited by others: the bird mimics their language and creates comical and uncanny resemblances. The choice to work with the specific animal figure refers exceedingly to some of Marcel Broodthaers's artistic and literary strategies, such as the fascination for animals or for the tautological repetition. It becomes Karl Larsson’s method of approaching Broodthaers activities as a poet and visual artist. The parrot is an echo, or a mediator of nonsense. It borrows somebody else’s language, something which in this case reflects the fact that Parrot is Larsson's English literary debut.

The exhibition Parrot is Index contribution in a network project, also including Wyspa, Gdansk; Pavilion, Bukarest and tranzit, Prag. It is generously supported by the Foundation of the Culture for the Future.