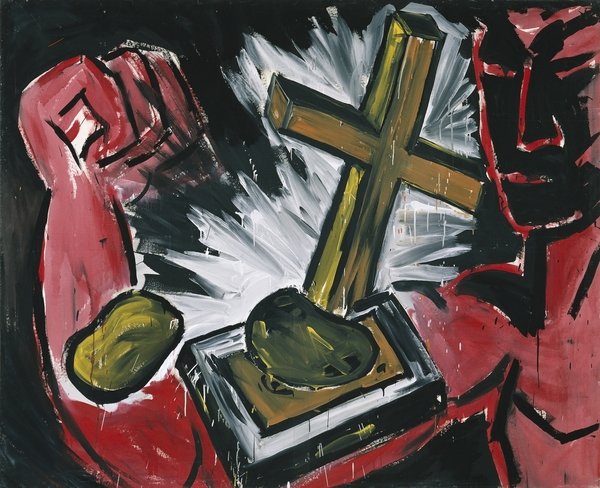 Things will get ugly, sensual and raw when ARKEN opens its big fall exhibition on September 4, 2010. The Wild '80s shines a spotlight on 95 works by 13 artists from the early 1980s art scene.

The young eighties generation of Danish artists had a bone to pick with the cool, politicizing art of the 1970s. They visualized the new thinking on "the death of the grand narrative," the collapse of hierarchies of value, the elimination of the boundary between original and copy, the mixture of fiction and reality in the media’s stream of images and the growing individualism in society.

In that sense, the works of those young artists are important documents for history. They speak of the currents that influenced culture and society in the late seventies and early eighties. In tune with the zeitgeist, they generally painted with ironic detachment but also with sensuality and curiosity about painting. In their raw, at times willfully ugly, expression, the works had a powerful impact on the viewer. Now that we have an occasion to take a fresh look at the work of these young wild painters, it’s clear that the energy and the nerve with which they applied paint to canvas still work today. The paintings still have a powerful impact on us today, because they are full of eighties noise and raw energy.

The 1980s were marked by the international focus on an Eastern Bloc in the early stages of dissolution and an increasingly dominant United States. Domestically, Danes saw economic growth grind to a halt. Unemployment grew and foreclosures became commonplace. The economic crisis in Denmark culminated in 1986 with the passage of the so-called “Potato Cure." The many similarities between the 1980s and today stimulate interest in the decade that brought punk music, CNN, disco, the squatters’ movement, Dallas and Dynasty to Denmark. ARKEN’s exhibition will convey the eighties atmosphere through music, documentary photography, video and literature.

There has not been a major reunion of the young wild painters since the group shows of the 1980s, not counting individual museum installations of their own collections. Now, it’s ARKEN’s great pleasure to throw open our doors to a sweeping exhibition of wild painting. The Wild ‘80s will be on view at ARKEN from September 4, 2010, to January 30, 2011. In addition, we have chosen to include works by the German painters, Die Neuen Wilden, who blazed a trail for Danish artists by infusing painting with new vitality.

The exhibition features 90 works by 13 artists from the wild generation. They include most of the artists in the watershed Kniven på hovedet exhibition, specifically Anette Abrahamsson, Peter Bonde, Claus Carstensen, Dorte Dahlin, Berit Heggenhougen-Jensen, Kehnet Nielsen and Nina Sten-Knudsen, along with the artists from the Værkstedet Værst studio, Erik A. Frandsen, Christian Lemmerz, Lars Nørgård and Michael Kvium, the latter associated with Værkstedet Værst mainly through his performances with Lemmerz. Also featured is Inge Ellegaard, who went to the Royal Academy in Copenhagen with the artists in Kniven på hovedet and Lars Ravn. The artists are selected because they were part of the movement when it began or because they today are identified with '80s wild painting and thus retrospectively help shape the scene.

Press conference on Wednesday September 1, 2010, at 12:00 noon
Please confirm your attendance to lea.bolvig@arken.dk