Hundertwasser's paintings resemble living organisms. In fact, he once called himself a 'magician of vegetation'. In their subject matter and forms, his paintings celebrate the beauty of nature. Hundertwasser harboured real hatred for geometrically straight lines. 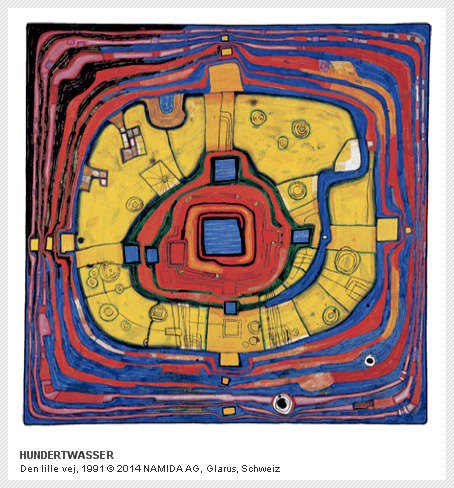 Hundertwasser the Phenomenon at ARKEN

“I want to show how basically simple it is to have paradise on earth.”

These are the words of the artist Friedensreich Hundertwasser, a painter, eco-activist and architect who sought to make the world a better place through paintings, manifestos and a more human architecture. Hundertwasser materializes paradise in brightly coloured paintings, fantastical buildings and a unique brand of eco-activism embracing everything from humus-toilet manifestos and tree-planting actions to plant-based root-zone treatment systems. He was controversial in his time. Today, his ideas about green architecture, ecology and urban gardening are more current than ever – even more so now that Copenhagen has been named European Green Capital 2014. From 1 February, you can experience Hundertwasser at ARKEN.

ARKEN is calling a press conference on the exhibition for Wednesday, 29 January, at 11 am. After a welcome by ARKEN Director Christian Gether, Curator Andrea Rygg Karberg will introduce the show. The press conference will be followed by lunch in the ARKEN Café.

Starting in February, ARKEN will be showing a large exhibition of the work of Friedensreich Hundertwasser (1928-2000). The artist gained worldwide renown in the 1960s and was widely influential throughout his eventful career. His unique imagery made it into many homes in the 1970s as prints or popular souvenirs from Vienna. But Hundertwasser was so much more than that. He was an uncompromising artist who, in his art, philosophy and lifestyle, fought to recreate harmony between nature and humanity. Today he is without doubt the most famous but also the most controversial Austrian artist of the post-war period.

In a year when Copenhagen has been named European Green Capital, ARKEN shines a spotlight on Hundertwasser’s painting, architecture, design and eco-activism. For him, art and life were two sides of the same coin. Art, clothes, homes, lifestyles, self-representation – even his name – were part of the big picture of the phenomenon of Hundertwasser.

Spirals and vegetal architecture
Hundertwasser’s paintings resemble living organisms. In fact, he once called himself a “magician of vegetation.” In their subject matter and forms, his paintings celebrate the beauty of nature. Hundertwasser harboured real hatred for geometrically straight lines. His wavy, asymmetric, brightly coloured architecture seems to grow and morph before our eyes. He sought to connect and reconcile the organic-vegetal world with the man-made. Trees and plants grow on the rooftops, through the buildings and out the windows.

Renewed currency
Hundertwasser carried out the first of his many action-based artworks about individual freedom and autonomy back in the 1950s as a showdown with Rationalist and Functionalist architecture. In his thoughts about sustainability and ecology and an art practice propelled by a basic utopian impulse Hundertwasser proved to be way ahead of his time.

“There is no doubt that Hundertwasser, in his ideas about green architecture, ecology and urban gardening, is more current than ever. But his utopian vision, his faith in the power of art, is also very relevant today. In a time of utopian deficiency, Hundertwasser makes for a surprising and inspiring acquaintance, who hits us right where we live,” ARKEN director Christian Gether says.

Catalogue
The exhibition is accompanied by a richly illustrated catalogue in Danish and English. The catalogue includes essays by Martin Zerlang, professor of comparative literature and modern culture at the University of Copenhagen, and the Danish artist FOS. The price of the catalogue is DKK 99.

Press conference on the exhibition for Wednesday, 29 January, at 11 am