In Dreams presents works on paper by established and emerging artists, that reveals their maker's desire to construct hermetic alternative worlds. In ways similar to the logic experienced when dreaming, these drawn fictions give rise to impossible or incongruous episodes. Michael Patterson-Carver's solo exhibition shows recent works on paper, allegories of well-known conspiracy theories, that embodies the very notion of the power of the individual's conscience and witness-bearing, and the continuing belief in art as a means of effecting change. 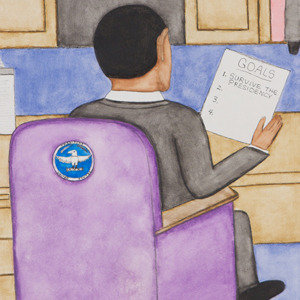 Timothy Taylor Gallery is delighted to present In Dreams, a group exhibition featuring works on paper by established and emerging artists, including Armen Eloyan, Volker Hueller, Tomasz Kowalski, Norbert Schwontkowski, Kiki Smith and Rose Wylie. This selection of figurative works reveals idiosyncratic narratives and their maker’s desire to construct hermetic alternative worlds. In ways similar to the logic experienced when dreaming, these drawn fictions give rise to impossible or incongruous episodes that nevertheless appear convincing when considered within their given context.

Norbert Schwontkowski’s elusive and surreal monotypes include isolated figures that occupy indeterminate grounds. Favouring a muted or monochrome palette, the artist generates a faded and worn patina, which suggests half remembered instances from a distant memory. Rose Wylie’s quirky and richly associative paintings and drawings are influenced by diverse and potentially clashing sources including Egyptian friezes, medieval wall paintings, South Park cartoons, Match of the Day, and a wide array of popular films. Typically, Wylie combines poetic, humorous and surreal imagery with a powerful political message.

The hand-coloured etchings of Volker Hueller evoke the atmospheric remains of a dark European history. Spidery lines delineate ambiguous scenes: suppressed violence and sexual tension permeate within the cracks and crevices of these complex drawings. Creating unsettling narratives using the iconographic repertoire of art history, the works of Tomasz Kowalski introduce glimpses of a parallel universe. Referring to the passage of time and the cycles of life and death, Kowalski’s surreal landscapes and interiors come crashing into our world. The lone figures that occupy several of the compositions featured in this exhibition bear testimony to a solipsistic tendency in many studio practices. Here an emersion in medium and process leaves only enough room for a projected equivalent of the maker.

Timothy Taylor Gallery is delighted to present the first solo exhibition by the American artist Michael Patterson-Carver in London. On display in the gallery’s Viewing Room, the show will feature recent works on paper. Born in 1958, Patterson-Carver's life and career have been shaped by his exposure as a young child to the US civil rights movement. His art and life are now inseparable. Taking a frank look at the political realm, Patterson-Carver’s work often represents well-known world leaders and people in power as well as ordinary men and women in their desire for change through direct action and demonstrations.

The power mongers are mocked through caricature, while ordinary folk are depicted with grace and respect. By giving form to, and poking fun at, the failure of world leadership and the disastrous effects of hypercapitalism, his drawings are a form of sympathetic magic, channeling the desire or power to confront these threats and fears. Many of Patterson-Carver's drawings are allegories of well-known conspiracy theories. In Supply and Demand (2010) the artist presents a classroom scenario in which the teacher demonstrates the beneficial impact of the US led invasion of Iraq on oil prices to a group of attentive students.

Patterson-Carver's work expresses, through its mode of address and what it reveals, an essential challenge to the dominant culture. It embodies the very notion of the power of the individual's conscience and witness-bearing, and the continuing belief in art as a means of effecting change. President Obama, the racial intolerance from sections of American society he faces, together with the difficult task that lies ahead of him, provides the subject matter for several recent works. In other drawings, the artist himself makes appearances as a lone demonstrator who stands against bigotry and the herd mentality of intransigent religious or political groups.