Appeal to Heaven. On show a suite of new drawings and the first of a series of new bronze busts of Peters. 'Appeal to Heaven' represents a continuation of Peters' in-depth exploration of the ideals and motifs of early American art and colonial history as viewed from our 21st Century vantage point. 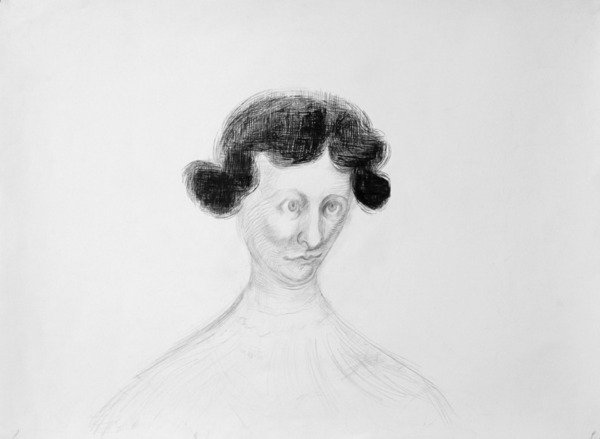 Winkleman Gallery is very pleased to present "Appeal to Heaven," our second solo exhibition by New York artist Sarah Peters. Featuring a suite of new drawings (the “Mayflower” series) and the first of a series of new bronze busts ("Descendants and Believers"), "Appeal to Heaven" represents a continuation of Peters' in-depth exploration of the ideals and motifs of early American art and colonial history as viewed from our 21st Century vantage point. Combined with her highly stylized landscapes, her portraits of the fervent idealists and puritan visionaries who risked everything to come here from Europe and their ideological heirs reveal not only a lost romanticism, but, in her words, “the chaos of initial human convictions and beliefs as tempered by time and experience.”

The drawings presented from the “Mayflower” series, each created in Peters’ signature aggressive cross-hatching and inky layering technique, include seven turbulent seascapes and a single portrait. The seascapes are titled with dates, beginning with “Sept 6, 1620” (the day the Mayflower departed from Plymouth, England) and ending on “November 9, 1962” (the day America was first sighted from the ship). Occasionally appearing among the magnificent yet terrifying waves in these scenes are what appear to be hallucinations of people or spirits bobbing in the open seas.

The single portrait is an imagined likeness of Dorothy May Bradford, wife of William Bradford who in addition to being one of the first colony's earliest governors would also leave the best-known written account of the settling of Plymouth, Massachusetts. Dorothy is unfortunately renowned for being the first of those who survived the sea journey to die in the “New World.” Today there are those who insist she accidentally fell from the Mayflower into the freezing waters of Provincetown Harbor and other who believe she intentionally jumped to her death. As such she epitomizes the tragic fate of Peters' central characters (the cast of true believers who follow their convictions, come what may) as well as the internal and external manifestations of the turmoil of belief.

The progression of sculptural technique and stylization represented via the six bronze busts from Peters’ “Descendants and Believers” series reflects the increasing sophistication achieved by early American artists through the centuries (a reconnection with European sensibilities over time, perhaps), even as the subjects’ shared emotional turbulence suggests a persistance of the belief tinged with longing and suffering that defined many of the earliest Puritans and continues up through those caught up in contemporary messianic cults. From her clunky but somehow still compellingly rendered portrayals of sexually ambiguous characters to her exquisitely sculpted saint-like young man (with a marvelous head of curls and a gently twisting neck), Peters' virtuostic spectrum parallels the artistic progress in early American art.

Sarah Peters received her BFA from the University of Pennsylvania in 1996 and her MFA from the Virginia Commonwealth University in 2003. She has been awarded multiple residences, including recently, The Fine Arts Work Center, Artist in Residency, in Provincetown, MA; the Marie Walsh Sharpe Studio Grant, in New York; and the John Michael Kohler Arts/Industry, Artist in Residency, in Kohler, WI. Her recent exhibitions have included show at artSTRAND Gallery, Provincetown, MA; The Front, New Orleans, LA; Provincetown Art Association and Museum, Provincetown, MA; and the Morris Museum of Art, Morristown, New Jersey.