Wed-Sat 12-6pm or by appointment

Gathered together in this show, the three artists offer potent testimony that the power of work staged in and on the body can outgrow the life and the boundaries of that body, and that work dedicated to the focused examination of self can transcend even that self. The body is a piece of work. 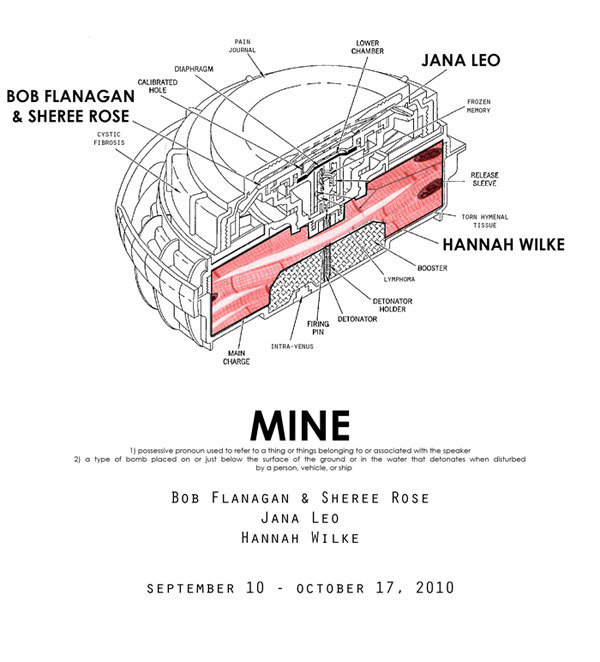 The work by Bob Flanagan, Jana Leo and Hannah Wilke presented here was produced under a storm of duress — the shadow of trauma, the immanence of despair. Each was produced in a reflective period, heralding for each artist an ideological responsibility—about the body, its limits and its idiosyncrasies, and about performance. The three bodies of work, each of which documents protracted struggles with pain and suffering, represent a challenge to an orthodoxy that says that much of performance art should offer global and social-criticism, that it should be impersonal and abstracted.

Rather than staging transgression as a form of extravagant melodrama, these works reveal real unwilled experience—intimate and personal, unscripted and undesired. To the extent that the three artists have rendered theatrically their traumatic experiences — two with terminal illness, one with sexual assault — they retain their authorial powers as a declaration of enduring creative autonomy even in the face of great obliterating terror.

Gathered together here, the three artists offer potent testimony that the power of work staged in and on the body can outgrow the life and the boundaries of that body, and that work dedicated to the focused examination of self can transcend even that self. The body is a piece of work.

Bob Flanagan (1952-1996) was an American writer, poet, musician, performance artist and comic. Born in New York City, Flanagan was diagnosed with cystic fibrosis at a young age, a condition that would influence his art and ultimately claim his life. Flanagan performed throughout the U.S. often in collaboration with his partner Sheree Rose, combining text, video, and live performance in highly personal but universal explorations of sex, illness, and mortality. His work has been shown at the New Museum, New York; Santa Monica Museum, Los Angeles, among others.

Jana Leo is a mixed-media and performance artist whose work has been shown at the Reina Sofia, Madrid; MoMA, New York; the New Museum, New York; the 2001 Venice Biennale; ICP, New York, among others. Her previous show at Invisible-Exports, “Rape New York,” was an open archive organized around the rape she suffered while being held captive in her own apartment in 2001.

Hannah Wilke (1940-1993), the pioneering feminist conceptual artist, worked in sculpture, drawing, assemblage, photography, performance and installation. Her work has been exhibited widely including at MoMA, New York; The Whitney Museum of American Art; P.S.1; MoCA, Los Angeles, to name a few. Innovative and controversial throughout her life, she undertook an astonishing project at its end, too, documenting in Intra-Venus her own suffering and final physical deterioration as a victim of lymphoma, which killed her in 1993. She is represented by Ronald Feldman Fine Arts, New York.

Invisible-Exports is a gallery dedicated to superior conceptual work. IE is located in the Lower East Side, at 14A Orchard Street, just north of Canal. The hours are Wednesday through Sunday, 11-6:30pm, and by appointment.