This exhibition is a survey of portrayals and depictions, several are to-scale and some are blown out of proportion. The images bear a direct relationship to that which they refer, but at the same time they take over and display their own reality, turning into objects in their own right. 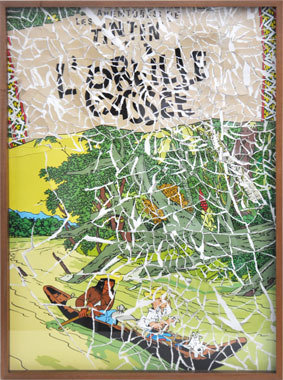 I BELIEVE MY FATHER invented Google Maps. Or at least a map of what could have eventually become Google Maps. He never fully realized this project though. The roads of his psyche, to use a fitting metaphor, were perhaps not made for opposing traffic. People say that every map is a portrait of its maker, a picture of his knowledge, perspective, and interpretation. One thing is certain, my father loves Google Maps.

This exhibition is a survey of portrayals and depictions, several are to-scale and some are blown out of proportion. The images bear a direct relationship to that which they refer, but at the same time they take over and display their own reality, turning into objects in their own right.

The philosopher Alfred Korzybski famously stated that "the map is not the territory," supposedly meaning that one should not confuse the representation of something with the actual thing. But there is a lot to be said for confusion. These are confused works, pictures that are both map and territory. What _is_ a poster for an exhibition of posters, or, what should we call a representation of dust made of dust-colored pigment dispersed over a room? Or a work that frames the clothes the framer was wearing when he made the frames? After all, isn't the best way to describe a story to tell one?

I have repeatedly come across a Lewis Carroll story about a country that, after several attempts at making an accurate map, makes a map the size of the country itself. But when using it, the citizens run into a number of problems and, following complaints from the farmers who argue that using the map would harm the crop, they decide to use the country itself as its own map, a solution they conclude is nearly as good. Here, the represented almost succeeds in becoming its own image, like the story, as I just told it, is almost the same as it was the first time around.

When attempting to light a sculpture fully, its shadows unfold on the floor around it. The sculpture practically appears overshadowed by the repeated figures. But if one would present the shadows as the work of art on display, would we see the sculpture as the portrayed? I have found pictures of body parts belonging to giant statues. These statues are constructed in fragments and will inevitably end in fragments again. They are a puzzle and we know the pieces; even when looking at the full figure, its own reality shines through. As an image torn to pieces and reassembled, it displays the scars of its own history while competing with the story it depicts.

The pictures argue within and among themselves, as their surfaces struggle with their content for domination. When a published representation of a work of art is framed and presented as a work again, the weight of the frame might initially outshine its content, which again, if the reflective UV filter makes it survive long enough, might gain enough importance to be appreciated on its own terms and perhaps even be freed from its frame again.

The viewer will see her own image mixed in with this story and any future photographic documentation is likely to include the reflection of its maker. Appositionally, a framed poster that has been sandblasted, obscuring the image and exposing the frame, has become a thing in itself, no longer a representation, and will never again reflect anything.

500 words by Nina Beier edited by Lauren O'Neill-Butler for Artforum.com, 2010.