Hydrarchy: Power and Resistance at Sea is a group exhibition that approaches historical and contemporary examinations of the sea and the offshore as contested cultural, political, legal and socio-economic territories. Focusing on specific events, situations and mythologies attached to past and recent maritime history, the works address power relations at sea and the forms of resistance and survival developed as a response. Curated by Anna Colin with Mia Jankowicz. 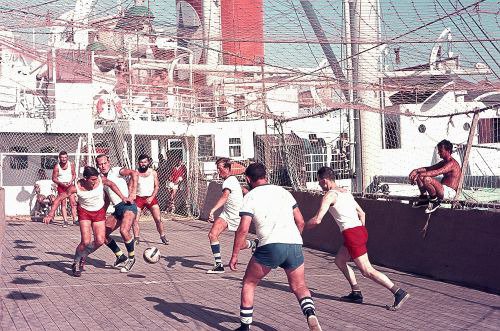 Hydrarchy: Power and Resistance at Sea* is a group exhibition that approaches historical and contemporary examinations of the sea and the offshore as contested cultural, political, legal and socio-economic territories. Focusing on specific events, situations and mythologies attached to past and recent maritime history, the works address power relations at sea and the forms of resistance and survival developed as a response.

Hydrarchy: Power and Resistance at Sea brings together artists whose work explores themes encompassing colonialism and the slave trade, commerce, sea tourism and offshore finance, as well as maritime folk history, piracy and the proverbially tyrannical figure of the captain. While not always explicitly referenced in the works, the ship, as the ultimate container and enabler of these activities, histories and relations, stands as the unifying element of the exhibition.

Works in the exhibition include:

Polly II: Plan for a Revolution in Docklands (2006), by Anja Kirschner and David Panos, is a satirical fictional video loosely based on John Gay's The Beggar's Opera. The work is set in the near-future where London has been flooded, high-end high-rises are being looted, financial speculation is spiralling and the dispossessed are literally adrift. In this context, a revolution against the ruling class led by lower class Londoners and dissidents is under way.

The Middle Passage (2006) by Mathieu K. Abonnenc refers to the forcible journey of African people to the New World from the 16th to the 19th century. A sequence of extracts from a range of Hollywood movies explores this undocumented and abstracted space from multiple viewpoints. The collaged fiction starts on the surface of the sea, continues its journey through a tropical forest, a cliff, and a drowned city, before diving into deep seas. Conspicuous in its absence is any explicit imagery of the figure of the colonised and of the ship that transported several million people on this journey of enslavement.

Christodoulos Panayioutou's (Untitled) Act II: The Island (2008) is part of a triptych made of folded theatre backdrops. Together, they form the narrative of a ship possibly departing to and returning from the European colonies. (Untitled) Act II: The Island catches the voyage at its mid-way point, on a lush and seemingly uninhabited island whose imagery matches the descriptions of the New World as the new commons or the new Eden. In this work, the ‘remote’ is conceived literally as a stage setting where narratives of discovery at sea unfold.

In the installation The Undesirables (2007), Melanie Jackson revisits the incident of the container ship MSC Napoli, which was stricken off the South English coast in 2007. As containers washed up on Branscombe beach, the media announced that according to maritime legislation their content would become common property. While people rushed to help themselves to items as varied as BMW motorbikes, shampoo bottles and trainers, the authorities and right wing media became increasingly hostile to this scavenging. Made of paper cut outs and dramatised by lights and shadows, The Undesirables recreates the event, evoking the social context in this tale of present-day bounty.

Uriel Orlow’s multi-media installation The Yellow Fleet (2010) takes as a starting point the failed passage of fourteen international cargo ships through the Suez Canal on 5 June 1967. Caught in the outbreak of the Six-Day War between Israel and Egypt, Jordan and Syria, the ships were only able to leave the canal in 1975 when it re-opened. While stranded, the political allegiances of the multi-national crews were dissolved and gave way to a form of communal survival and the establishment of a social system. This involved the organisation of their own olympic games, amongst other activities. Playing with different modes of documentary and narrative, The Yellow Fleet focuses on this event hidden in the shadow of official histories.

Hydrarchy: Power and Resistance at Sea consciously parallels the maritime activities of the late 18th century with those of the late 20th and early 21st century as two periods in which the exploitation of offshore conditions have produced defining global economic and social relations. These relations, much like the mercenary activities of pirates and maritime privateers, exceed and undermine – and yet ultimately serve to reiterate – the stable fictions of the nation state.

* Revived by radical historians Peter Linebaugh and Marcus Rediker in The Many-Headed Hydra: Sailors, Slaves, Commoners, and The Hidden History of the Revolutionary Atlantic (2001), the term 'hydrarchy' is used to “designate two related developments of the late seventeenth century: the organisation of the maritime state from above, and the self-organisation of sailors from below”.

A one-day conference brings together speakers from the fields of theory, history, geography, politics and contemporary art to discuss the themes behind the exhibition, based on their own research and perspective. Offering a historical and theoretical framework, while expanding on the artistic propositions presented in the exhibition, the conference aims to further delve into the zone of exception and liminality that constitutes the sea and the offshore.

Sunday 19 September, 12pm
Each thing seen is the parody of another, or is the same thing in a deceptive form
Angus Cameron at London Zoo

As an extended part of the Hydrarchy conference, Goldin+Senneby organise a talk at London Zoo with economic geographer Dr Angus Cameron, who acts as spokesperson of the artist duo. In this talk, Angus Cameron has promised to explain what a 14th century fictional knight and a handful of monkeys in Gibraltar have to do with the construct of state sovereignty and its peculiar states of exception.

Two opportunities to view Looking for Headless (2010), a documentary directed by Kate Cooper and Richard John Jones, and commissioned by Goldin+Senneby for the project Headless.

Hydrarchy: Power and Resistance at Sea is curated by Anna Colin (Exhibitions Curator, Gasworks) with Mia Jankowicz (Artistic Director, Contemporary Image Collective, Cairo) and is inscribed in the long-term project Disclosures, started at Gasworks in 2008 by the two curators. Disclosures aims to open up and draw parallels between non-dominant histories and cultural practices on the one hand, and contemporary cultural production and political structures on the other hand. See: https://disclosuresproject.wordpress.com/. The exhibition at Gasworks will form the basis of a revised exhibition project at Contemporary Image Collective, Cairo, in Spring 2011.

The exhibition, conference and events programme have been made possible through the generous support of:
Esmée Fairbairn Foundation
Henry Moore Foundation
Calouste Gulbenkian Foundation

Yellow Fleet (2010) by Uriel Orlow has been supported by a Grant for the Arts.