Flying down to Earth

Through different media and a wide range of historical, cultural and political references, the works in Flying down to Earth explore a few key subjects: ritualistic structures employed to comment on representations of the social body (Taller E.P.S. Huayco, Mona Vatamanu & Florin Tudor, and Alexandre Vogler); disenchantment and rebellion in the individual's psyche towards religious dogmas (Flavio de Carvalho, Ossama Mohammed and Valerie Mrejen); acts of iconoclasm and iconophily that confront the omniscient presence of power both political and divine (Samuel Beckett, Cristina Lucas and Jose' Alejandro Restrepo). Curated by Inti Guerrero, winner of the 2009 MARCO/FRAC Lorraine Award for Young Curators. 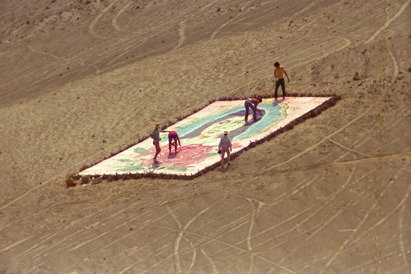 "Featuring a broad range of international artists and film directors, the exhibition investigates the complex connections between societies and religiosity in relation to institutions, politics, popular culture and collective memory. It asks provocative questions about the ways that belief systems render our psychology, social hierarchies, idiosyncrasies and imaginaries.

The point of departure of the show is a series of aerial photographs of the Nazca lines in Peru taken by Marilyn Bridges in the late 1970's, which is part of the FRAC Lorraine collection. Bridges' dramatic compositions, taken "from up there," invert the traditional gaze of the earth upward to the heavens that these sacred marks invoked in the past, desacralizing the "above" and exposing the void beneath the clouds.

Through different media and a wide range of historical, cultural and political references, the works in Flying down to Earth explore a few key subjects: ritualistic structures employed to comment on representations of the social body (Taller E.P.S. Huayco, Mona Vătămanu & Florin Tudor, and Alexandre Vogler); disenchantment and rebellion in the individual's psyche towards religious dogmas (Flávio de Carvalho, Ossama Mohammed and Valérie Mréjen); acts of iconoclasm and iconophily that confront the omniscient presence of power both political and divine (Samuel Beckett, Cristina Lucas and José Alejandro Restrepo).

Without fetishizing "the esoteric" or "the occult", this exhibition attempts to understand how our identities are marked by the rituals of affiliation to or emancipation from the sacred. It seeks to capture that precise crucial moment that marks a perceived epiphany or an irreparable disenchantment, as well as the social background of such individual experiences.

The exhibition's installment at MARCO responded to the museum's specific setting – a former panoptic prison – by emphasizing the idea of a divine gaze that pervades our everyday lives. The installation at the FRAC Lorraine builds on this subject of surveillance by integrating a permanent work in the space, Forever by artist Dora García, which allows both the artist and the on-line public to continuously observe the interior of the exhibition space."—I.G.

MARCO/FRAC LORRAINE AWARD FOR YOUNG CURATORS 2009
The common interest in supporting new generations of professionals who wish to start out into the world of institutional curatorship has inspired this edition of the Award for Young Curators. A total of 119 applications (from Europe, the United States and South America) were received by the members of the jury -I. Martínez Antelo, Director of MARCO, B. Josse, Director of Frac Lorraine, K. Muhlen, Director of Casino Luxembourg - Forum d'art contemporain, A. Ledo Arias, Head of Exhibitions at MARCO, and P. de Llano, art critic and curator.

Inti Guerrero is an art critic and curator (1983, Bogota, Colombia) and based in Amsterdam (the Netherlands). Former curator-in-residence at Fondazione Sandretto Re Rebaudengo in Turin and Capacete Entretenimentos in Rio de Janeiro, Guerrero fulfilled De Appel's Curatorial Programme, previously having studied Art History & Theory at Universidad de Los Andes in Bogota, Colombia and at Universidade de São Paulo in Brazil.

Open your eyes, Open your minds...
In collaboration with his partners, the Frac proposes a series of encounters which are a chance to jolt our minds and bodies, a civic program attempting to "re-enchant" the world.

Architecture, as well as spirituality, occupy the place of honor in this year’s European Heritage Days at FRAC.
(Re)discover the august hôtel Saint-Livier (the oldest civic structure in Metz) transformed by the bodies of dancers whose presence enlivens our new exhibition. For to animate means, above all, to bring things to life, to breathe a soul into objects.

The programming includes:
- improvised dances performed by Compagnie “Averses”;
- guided tours of the building and of the exhibition every hour on the hour;
- game and contests