On show six artists from the East Mediterranean region who explore how cinema informs representations of reality through videos, installation and performance works. The artists participating in this exhibition live in or are from countries located in the East Mediterranean, a region denoting the countries that are geographically located to the east of the Mediterranean Sea and happen to be linked by a continuous land mass. 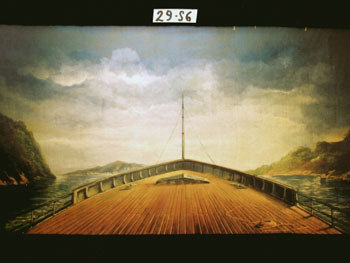 Live Cinema/In the Round (September 17, 2010 – February 6, 2011) features the works of Ziad Antar, Inci Eviner, Hassan Khan, Gülsün Karamustafa, Maha Maamoun, and Christodoulos Panayiotou, artists from the East Mediterranean region who explore how cinema informs representations of reality through videos, installation and performance works. The title, In the Round takes its cue from theater-in-the-round, in which the audience surrounds the stage, allowing a more intimate experience for the viewer and a more realistic performance from the actors. Inspired by this theatrical technique, the works on view are not simply projected on a two-dimensional plane; they surround the audience and also migrate to other galleries within the museum. In each work, the actors (or sometimes the blatant absence of an actor) play out a specific role that invites the audience to imagine other possible narratives for the backdrops that host them. Live Cinema/In the Round is organized by Istanbul-based guest curator November Paynter.

The artists participating in this exhibition live in or are from countries located in the East Mediterranean, a region denoting the countries that are geographically located to the east of the Mediterranean Sea and happen to be linked by a continuous land mass. Over the course of the last decade the contemporary art institutions and initiatives in the countries of the East Mediterranean have created more opportunities for mutual cultural exchange and dialogue. A number of artistic residencies and funds now exist that encourage artists to travel between cities such as Cairo, Istanbul, Beirut and Nicosia. The artists selected for this exhibition often present their work in this region of the world and their inclusion in this exhibition was motivated primarily by their interest in performance-based practices and in particular the cinematic references found within their work.

Some of the works in the exhibition make use of found film footage or reconstruct known film scenes, whereas others create a dialogue with artefacts in the Museum's collection.

Hassan Khan' s work G.R.A.H.A.M. presents a portrait as both subject and audience in a continuously-shot real-time video of an individual asked to remain completely silent even while being interrogated off-camera by the artist. Gülsün Karamustafa's Bekledigimiz Günler (The Days We Have Waited for) (2007), is the portrait of Istanbul at a specific moment in time. The work is comprised of footage taken from 1960s and 1970s newsreels that viewed now appears self-promotional and as such emphasizes the power of cinema as a social tool of communication.

Building upon an earlier theme exploring the relationship between Egypt's pyramids and its cinematic traditions, Maha Maamoun's 9-minute film 2026 (2010) steps into the future to consider the pyramids and their relationship to Cairo's city structure 16 years from now. (Untitled) Act I: The Departure (2007) and (Untitled) Act III: The Glorious Return (2008) by Christodoulos Panayiotou suggest scenes of introduction and finale for the exhibition. Panayiotou's backdrop works present rolled theatre backdrops with a small reference photograph of their unfurled images as they would look when hung on stage. Infiltrating the historical galleries of the museum are three video works by Inci Eviner titled New Citizen (2009). Here, traditional decorative patterns are animated by moving female protagonists and their disconnected body parts in choreographies that deconstruct the surrounding motifs. In Ziad Antar's La Souris (2009) a toy mouse is wound up by the artist and directed at a real mouse trap over and over again. The scene is a simple empty stage where the mouse is the only performer.

While Hassan Khan's video G.R.A.H.A.M. acts as a steady, contemplative platform for the exhibition that harks back to the genre of portraiture, it is offset by the dense content and clear film references of Gülsün Karamustafa's and Maha Maamoun's works. Christodoulos Panayiotou's backdrops appear to open and close a conversation between all the works in the exhibition while reminding the viewer of the defining role of the actor or narrator in a film, or the lack thereof. Inci Eviner's videos seem to have escaped the borders of the official video gallery to virally spread throughout the Museum, while finally, Ziad Antar's video La Souris is included as a hint for the audience to question what it is they respond to and then choose to see within an artwork.

INCIDENCE
September 17, 2010 at 7 p.m.
Slought Foundation, 4017 Walnut Street, Philadelphia. Free to the general public.
INCIDENCE, a live concert with Hassan Khan, will be presented in collaboration with Slought Foundation. INCIDENCE is a seamless, continuous stream of improvisational pieces and music compositions by Khan accompanied by video sequences specially shot by the artist.

About the curator:
November Paynter has been based in Istanbul since 2002 where she worked as a Curator at Platform Garanti Contemporary Art Center until the end of 2006. She was one of two Assistant Curators of the 9th International Istanbul Biennial in 2005. In 2003 she was the recipient of the Premio Lorenza Bonaldi per L'arte – EnterPrize and the first curator under the age of 30 to be recognized with this award. In 2007, Paynter took the temporary position of Consultant Curator at Tate Modern for the exhibition Global Cities, before moving back to Istanbul the same year to work as Director of the Dubai Artist Pension Trust and as a freelance curator. In addition to writing texts for exhibition publications and artist monographies, she has written for art periodicals including Artreview, ArtAsiaPasific, Bidoun, and Artforum.

About Live Cinema:
Live Cinema is a series of programs in the Video Gallery of the Museum that explore the vast production of single-channel video and filmwork by a diverse group of local, national, and international artists. In the last decades an ever-increasing number of contemporary artists have appropriated these mediums as an artistic outlet, in a dialogue with the early video and Super 8 practices of the 60s and the tradition of experimental filmmaking. Each program of the Live Cinema series focuses on a specific aspect of this work, in order to both map and analyze this important facet of contemporary art production.

This exhibition is made possible by The Women's Committee of the Philadelphia Museum of Art and The Turkish Cultural Foundation. Public events are supported in part by the University of Delaware Interdisciplinary Humanities Research Center and by the Slought Foundation.

Image: Christodoulos Panayiotou, detail of (Untitled) ACT I: The Departure, 2007. Folded theater backdrop and framed photograph. Courtesy of the Collection of Nicos Pattichis