Featuring masterpieces by John James Audubon, the Peale family, William Michael Harnett, Georgia O'Keeffe, Andy Warhol, and others, this exhibition explores American still life from its beginnings in the late 1700s to the Pop Art era of the 1960s. 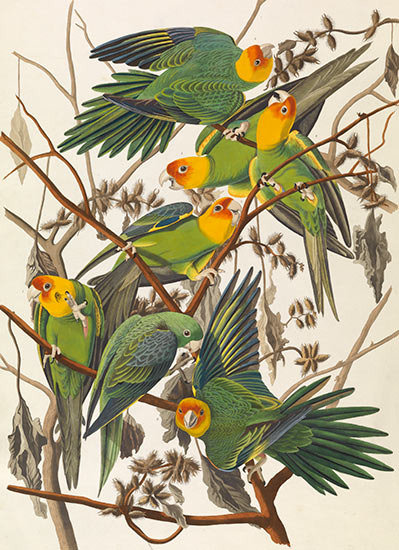 The first survey of American still life in three decades, this exhibition offers 130 oil paintings, watercolors, and works in other media representing the finest accomplishments in the genre. Featuring masterpieces by John James Audubon, the Peale family, William Michael Harnett, Georgia O’Keeffe, Andy Warhol, and others, this exhibition explores American still life from its beginnings in the late 1700s to the Pop Art era of the 1960s.

Taking a fresh approach to the subject to reveal the genre’s astonishing variety, the exhibition presents four distinct eras of American still life, each defined by a unique culture of seeing objects: describing, indulging, discerning, and animating. Within these sections, visitors are encouraged to explore still life as a reflection of American identity and culture through time.

Still life is generally an art of intimacy, intended for display in homes and other private settings. From the perfect serenity of tabletop compositions created by Raphaelle Peale (1774–1825), to the trompe l’oeil illusions of William Michael Harnett (1848–1892), to the explosive floral abstractions of Arthur B. Carles (1882–1952), still lifes provoke the senses and reward close looking. The exhibition employs theatrical displays and interactive technologies to encourage substantive, personal encounters with the works.

The genre has a special connection to our region: Philadelphia artists first defined American still-life practice and remained at its forefront well into the twentieth century. This exhibition is the first to explore this distinctive aspect of American still-life painting.

The exhibition evokes the different ways of looking that American still-life painters have explored of the course of more than two centuries, immersing visitors in fully developed environments. The still lifes of the mid-19th century, for example, were typically created for parlors and dining rooms. A re-created Victorian parlor invites visitors to appreciate these semipublic social settings, where educated and erudite conversations were sparked by artworks such as Edward A. Goods's Fishbowl Fantasy (1867). The artworks themselves are arranged in small groups to encourage comparison and discussion among visitors, as they did for their early audiences.
The exhibition also includes evocations of Theodore Stewart's famous New York City saloon, which drew crowds from nearby City Hall and around the world to admire William Michael Harnett's large-scale After the Hunt (1885), which was displayed there in its own theatrical setting for many years. Themes such as music, literature, popular media, and science—including tangible ephemera such as bird specimens, magazines, and pocket watches—bring forward the immediate inspirations and contemporary contexts of the art.

Mark D. Mitchell, the Associate Curator of American Art and Manager of the Center for American Art, said: "We examine not only still life's development in America—motivated as much by wider cultural dynamics as by artistic taste—but also the distinctively regional association of American still life as a Philadelphia story."