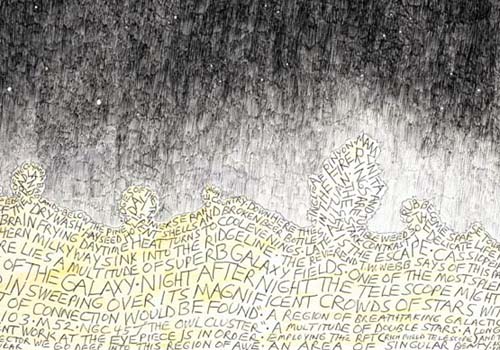 Crotty's globes, with measurements ranging from 16 to 48 inches in diameter, depict his night observations from high in the hills of Mailbu, California where his observatory housing a ten-inch f/8 Newtonian reflector telescope is the birth place for this artist and amateur astronomer's marriage of the arts and sciences.

Holly Myers of the Los Angeles Times writes "Crotty is certainly a man of science, although you might find it a quaint sort of science next to the high-tech efforts at the Jet Propulsion Laboratory and Caltech. Crotty relies on direct observation and manual-that is, unmechanized and undigitized-recording of nature. He is a certified documentarian of the Assn. Of Lunar and Planetary Observers, an organization of amateur astronomers who assist professionals. As such, he has trained his eye to conform to a rigorous diagrammatic protocol, and his work demonstrates a sublime patience and a tireless faith in detail. That said, the work is not cold or mechanical but engrossingly vibrant. Each image is composed of thousands of thin, short strokes of black ink, which make for a delicate, even sensuous surface quality, despite the seemingly inexpressive nature of the medium (ballpoint pen). This exhausting technique lends a lush texture to the blackness of Crotty's skies and a complexity to their vastness. Some of the compositions are recognizable as images of outer space, while others are more abstract and might be easily mistaken for Minimalist experimentation. None of the works, however, looks like a NASA photograph; inscribed by a human hand, they are imbued with a very personal quality of awe." Crottyâ€™s work will also be on view this fall at MoMA QNS in the exhibition 'Drawing Now: Eight Propositions' opening October 16, 2002 - January 6, 2003.