Figa. Using components that age slowly over time, artist's objects evoke a sense of temporality and impermanence through their patinas and wear. "Auad nods to Brazilian religious tradition and belief in chance, while also highlighting our reliance on antiquated relics and traditions to influence our futures". 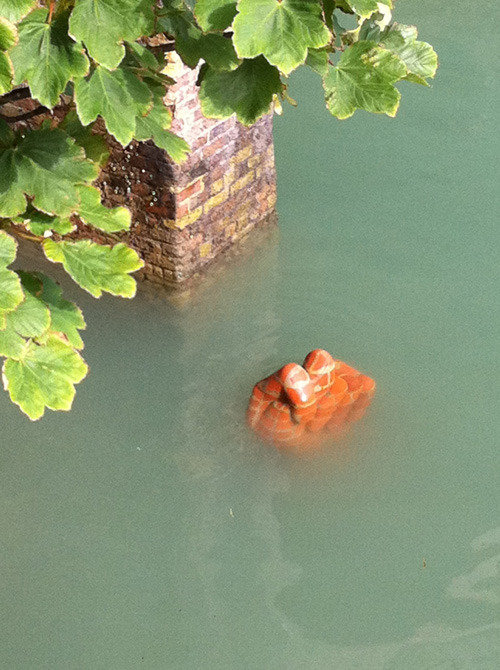 CRG Gallery is pleased to present Tonico Lemos Auad’s second exhibition with the gallery. Using components that age slowly over time (like cloth, silver, marine wood, and brick), Auad’s objects evoke a sense of temporality and impermanence through their patinas and wear. The delicacies of the works offer sensations of fantasy, the softness a sense of fragility and vulnerability.

The five hourglass-shaped cloth sculptures of Relógio de Areia (2012) are receptacles of time past and time future. Each element has a different metal cast in the base taken from accumulations of sand in units of time: one minute, three minutes, and ten minutes. The resulting abstract pattern stitched on the exteriors produces a seemingly organic landscape, determined differently for each separate piece. The passage of time, however regular, is an accumulation of thousands of events, woven together to produce a unique outcome.

In Auad’s hometown of Belém, Brazil, Círio de Nazaré is an annual Catholic procession of two million people through the streets towards the Shrine of Our Lady Nazareth, where attendants celebrate their fortune and ask for, through various physical tokens, further good luck. One such token is the building brick, worn atop the heads of many devotees in a symbolic gesture of appreciation for shelter and continued safety. With this pilgramatic ritual in mind comes Figa (2012) a six-foot brick hand, the thumb of which pokes deliberately through the pointer and middle finger. This gesture is also commonly used as a Brazilian charm worn on necklaces that symbolize good luck, and Figa provides the intersection of two superstitious acts that are ingrained in Brazilian culture.

The hand-woven brass object Shelter (2012) simulates an architectural construction. However, the gaps in the brass weave and the shape of the object itself make obvious that it cannot function in a protective capacity. The delicate folds of the metal itself seem almost cloth-like, reinforcing the object’s lack of utilitarian value.

Auad nods to Brazilian religious tradition and belief in chance, while also highlighting our reliance on antiquated relics and traditions to influence our futures. Auad himself acknowledges that he is not free of these practices. Reflected Archeology (2012) requires the viewer to seek out the depictions underneath the surface. Throughout the course of the show, visitors will scrape away at the silver overpainting (the same sort used on scratch off lotto tickets), to reveal a series of photographs woven together, taken from the Círio de Nazaré procession. Auad allows group participation to produce an unanticipated result, leaving the fate of his work– like the fate of those who participate in superstitious or religious rituals– in the hands of another force.