tue-sat 10-6pm and by appointment

Treasury is the first solo show in the US for Jan De Vliegher, who creates a series of monumental paintings which reference the artist's obsessive hunt for otherwise overlooked porcelain plates. The lush colors, dramatic brushstrokes and overpowering scale of his work, however, starkly diverge from the otherwise controlled subject matter. 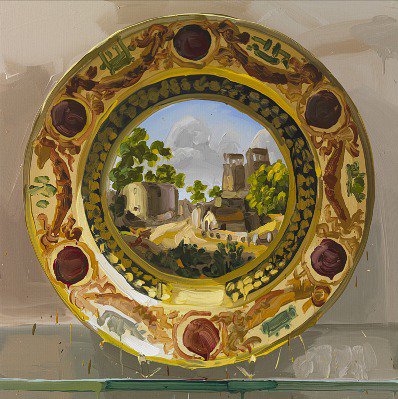 Mike Weiss Gallery is pleased to present Treasury, a new exhibition of paintings by Belgian artist Jan De Vliegher. For his first solo exhibition in the United States, De Vliegher creates a series of monumental paintings which reference the artist's obsessive hunt for otherwise overlooked porcelain plates. United in their ritualistic and repetitive compositions the series of circular abstractions reveal De Vliegher's fascination with the painting experience while also speaking to broader themes of contemporary collecting.

Like a cultural anthropologist, De Vliegher meticulously documents his varied sources of inspiration in their traditional museum context. The lush colors, dramatic brushstrokes and overpowering scale of his work, however, starkly diverge from the otherwise controlled subject matter. The subsequent rush-infused paintings transcend their representational qualities and assume the commanding presence of contemporary abstractions. In the same way Baselitz's act of turning his paintings upside down avoided a literal and linear interpretation; De Vliegher ignores the differences within the distinct plate genres--from French Rococo to Qing dynasty--and imbues the work with a palpable essence that is reflective of the artist's unique, energetic input.

The title of the show, Treasury, calls to mind currency and precious items, perhaps a play on the over-abundance of "treasured" objects housed in countless sacrosanct institutions and museums. De Vliegher's paintings, which present collectibles affiliated with nobility and European aristocracy, take the oft-ignored and exalt them with a singular vision. Set against a neutral background, the plates become secondary as the circular shape takes prominence-- color and composition convey the artist's mastery, while an abstracted form and drip-marks transform the otherwise ornate quality of a porcelain plate. In his idiosyncratic, expressive representation of the painted medallions, De Vliegher rejects the fragility of the plates' perfectly polished appearance and creates a new object to revere.