Bernard Childs features oil paintings from 1970s: scientific discoveries of the time led him to consider the possible catastrophic destruction of our planet and how living things might survive. Nick Lamia features a site-specific installation, which incorporates a group of new paintings and works on paper. 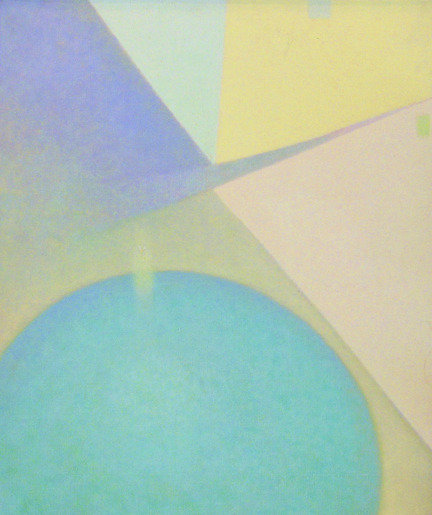 In the early 1970s, Childs developed a keen interest in environmental issues. Scientific discoveries of the time led him to consider the possible catastrophic destruction of our planet and how living things might survive. He meditated on distant worlds and ancient forms of life, such as insects, which became symbols of survival for him. He took little for granted and recognized beauty and value in every form of life, no matter how small; to Childs there was no hierarchy of life where humans were considered superior. His 1970s paintings fuse Childs’ fascination with science fiction, technology, space exploration and the survival of unexpected species of life.

In contrast to their sometimes severe themes, Childs’ celestial arrangements of vibrant spherical forms are tranquil, inviting, and hypnotic. These poetic images emanate a warm pastel glow within a spectrum of their own radiating light, generating a sense of translucent depth. Childs’ luminous palette was inspired by a visit to Stockholm in June 1970, which left the artist captivated by the city’s mid-summer light. All these influences would drive the next seven years of his career, culminating in a body of work that revolved around the survival of the planet, living and dying suns, insect and vegetable life, and the formal qualities of color and light.

Born in Brooklyn in 1910, Bernard Childs traveled extensively throughout his life. He studied in New York with Nicolaides and Amédée Ozenfant, and in Paris with Stanley William Hayter. From 1966 to 1977 Childs commuted between his studios in Paris and New York. After a stroke in 1978, he remained wholly in New York at the Chelsea Hotel until his death at age 74. Childs’ work is included in the collections of the Metropolitan Museum of Art, New York; the Museum of Fine Arts, Boston; and the Stedelijk Museum, Amsterdam.

Nick Lamia’s paintings, drawings and installations explore concepts of space by means of abstraction. In his work, the picture plane or the confines of a specific location transform into a vibrant meeting ground for opposites. Lamia rhythmically contrasts concrete shapes rendered in opaque hues with gestural marks and translucent layers. He further navigates between geometry and biomorphism, deep and shallow space, overt and restrained gestures, as well as saturated and de-saturated fields. The results are compositions, in which the eye travels from almost purist presentations of color to areas that evoke architectural drawings or map-like constructs. Though Lamia’s vocabulary at times alludes to aerial views of elaborate geographical formations or urban infrastructures, for example, it remains open to interpretation. Lamia encourages association without providing specific references.

Lamia’s site-specific installation is inspired by coppicing, a traditional method of woodland management. The latter takes advantage of the fact that many trees make new growth from the stump or roots if cut down. In a coppiced wood, young tree stems are repeatedly cut down to near ground level. To Lamia, the practice represents an intentional merging of man and nature. He states: “By titling my work “Coppice” I am not advocating coppicing as a practice, but rather employing the term to symbolize a philosophy wherein man actively pursues and attempts to build a mutually beneficial relationship with nature.” Lamia’s installation features a stem-like center from which wall drawings and three-dimensional elements develop like eager growth. Each branching element extends and unfolds throughout the gallery space. By incorporating abstract paintings and several drawings of stumps found in New York City parks, Coppice transforms into a complex contemplation of destruction and regrowth.

Nick Lamia lives and works in New York. Before receiving his MFA in painting from Boston University in 2000, he studied Environmental Science at U.C. Berkeley. Lamia was recipient of a Guggenheim Fellowship in 2003. Recent exhibitions include projects at the Bronx Museum of Arts, NY and the Maine Center for Contemporary Art. This past winter he completed a residency program at Wave Hill, NY. This will be Nick Lamia’s first solo show with the gallery.

Please contact Kelly Reynolds at 212-319-1996 or kelly@jasonmccoyinc.com for further information.