7 artists whose works in different ways explore the social, economic and political structures in Mexico City. Curated by Cuauhtemoc Medina 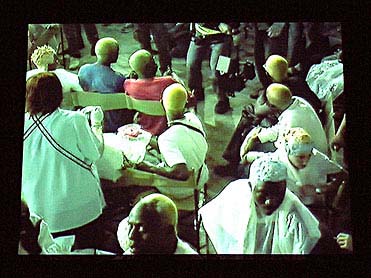 20 Million Mexicans CanÂ´t Be Wrong attempts to convey something of the sense of urgency involved in art making in Mexico City and, to a certain degree, to justify its contemporary cultural potential. Distancing itself from any stereotypical notion of Mexican culture, the exhibition focuses on a specific set of artistic and social symbolic interventions, to some degree mimicking the megalopolis as an ambitious and chaotic social structure characterized by inequality, visual density, political tension and cultural complexity.

During the last decade, artists in Mexico City have developed an array of conceptual and visual strategies which simultaneously address their social and urban context and challenge the conditions of art practice today. Having emerged from a relatively poor institutional setting, with a narrow educational structure and weak art market, they transformed the relative void in which they were working into an alternative centre for contemporary art which is now beginning to be represented in exhibitions and cultural networks around the world. The community of artists in Mexico City enjoys an exceptional level of integration between Mexican-born artists and those from elsewhere: from Europe, the USA, South America and the Caribbean. Generally self taught, they tend to exhibit in alternative venues or under-funded local gallery spaces. Their practice is based on a dialogue between western contemporary art sources, modern forms of popular creativity, and the marks and signs of the econ! omics of survival in an underdeveloped country on one hand, and a highly politicized social environment on the other. Despite enormous variety in aesthetics and methods employed, these artists' works can all be read as responses to the conflictive experience of being in the most populated city in the western hemisphere: a megalopolis inhabited by twenty million people which in many ways represents a symbolic borderline between the first and the third worlds. Above all, these artists share a common experience which is revealed in their work through an emphasis on improvisation and conceptual dexterity.

Rather than being framed around a thematic, theoretical or historical standpoint, 20 Million Mexicans Can't Be Wrong experiments with the very nature of touring art exhibitions as sites of artistic exchange. Each of the seven artists included in the show, whether Mexican born or not, investigates forms of social exploration and modes of involving the audience both in and outside the exhibition space. Vicente Razo's Salinas Museum, originally established in the toilet of his flat in Mexico City, is an extraordinary collection of literally hundreds of parodic popular representations of former Mexican president Carlos Salinas, which Razo collected in the mid 1990s. Shown here for the first time in Europe, the collection includes edible chocolate figures, metre-high dolls based on Judas dolls and images and figures of Salinas as the devil or a vampire. Melanie Smith, who has been living in Mexico City since the 1980s, returns to her native Britain to exhibit an installation of vid! eo and paintings born of her on-going interest in the tensions between abstraction, contemporary beauty and the visual economy of the third world. In sharp contrast, a sculpture by Teresa Margolles represents the way in which she has tested the limits of art-making over the past ten years by using human remains and forensic material in an on-going critique of the selective disregard of burial rights and the failure to systematically register deaths in Mexico.

Whereas the primary focus of these works is on radically different aspects of local visual culture, others exploit the ambiguities involved in the hypothetical exchange involved in touring an international exhibition of this kind. Belgian born artist Francis AlÃ¿s presents a new sound piece from his Rehearsal series which subtly creates the illusion of displacement, whereas the artist-curator Pedro Reyes launches his Polyforum, an on-going project in which conversations with architects, theoreticians and artists are markers in this ever-expanding investigation into the intersection between architecture, invention, research and the production of knowledge. Finally, two artists in the show have placed audience participation at the centre of their work. Carlos Amorales's production line requires the audience to become unpaid workers in the fabrication of trainer shoes for wrestlers, whereas an "action" organised by Santiago Sierra to take place simultaneously in London, Geneva, Vi! enna, Frankfurt, New York and Madrid on 7 September re-exports back to the developed west the political turmoil produced in the south by the current process of economic globalization.

The above text is by the curator of 20 Million Mexicans Can't Be Wrong, CuauhtÃ¨moc Medina, an art critic, curator and art historian who studied for his PhD at the University of Essex and since 1992 has been full time researcher at the National University of Mexico. From 1992-8 he was a member of Curare- an independent group of critics and curators that tried to develop an independent intellectual and curatorial policy from that of the Mexican State. Most recently, he has become an advisor to Tate on Latin American Art.

The exhibition will tour to the John Hansard Gallery, Southampton in January 2003, and has been funded by the Arts Council of England's National Touring Programme, The Felix Trust for Art, London Arts, The Mexican Ministry for Foreign Affairs, SLG Patrons and Southwark Council. Thanks also to Gasworks for hosting Pedro Reyes' London residency.

19 September 2002 7.30 - 9pm CuauhtÃ¨moc Medina, curator of 20 Million Mexicans Can't Be Wrong, will be in conversation with the writer, critic and curator, Jean Fisher.