Art in the Wake of Television Camp' 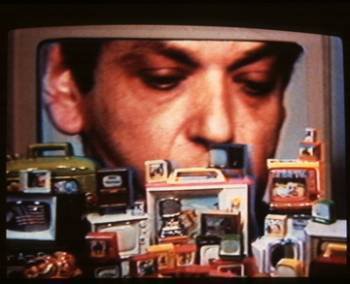 While television still plays a part in determining our thinking, behaviour and actions as a matter of course, it is now also numbered among the things we no longer reflect upon by sheer force of habit. In light of this it seems an appropriate time to take another closer look at the 'goggle box'. 'Forbidden Love: Art in the Wake of Television Camp' will observe the seductive methods of television, with its 'gaudy mannerisms', and describe television as a world of experience with different formats, forms of communication and inherent ambiguities. The project aims neither at a thematic nor a moralistic analysis of television, but rather at an aesthetic, 'camp' approach, in keeping with Susan Sontag's analysis in her 'Notes on Camp'.

The exhibition 'Forbidden Love: Art in the Wake of Television Camp' readdresses an area that the Kőlnischer Kunstverein helped to shape decisively during the 1980s with the presentation of Gerry Schum's 'Videogalerie – Fernsehgalerie' in 1980 and through exhibitions such as 'Video-Skulptur' in 1989 by Wulf Herzogenrath, and 'The Arts for Television' in 1987. Today however, the focus for artists seems to not be so much a question of the development of technical possibilities or even a critique of this homogenising, consumer-oriented mass medium. At the same time, this year's exhibitions like 'Changing Channels' at the MUMOK in Vienna or 'Are you ready for TV?' at MACBA in Barcelona show a renewed interest in historical art-projects for television from the 1960's - 1980's that paved the way for this kind of analysis of TV.

Instead, 'Forbidden Love: Art in the Wake of Television Camp' will present artists who work with the structural conventions of television, using them for their own ends. Like Warhol, these artists can knowingly utilise the rules of the attention-dependent economy, play with celebrity culture, and adopt the episodic structure of soaps, TV shows, music clips, or talk shows, turning them into something else. The exhibition includes artists who are not necessarily using their own transmission slot on television. Instead, like parasites, there are those that infiltrate existing TV with their own artistic concerns. One example is Mel Chin (b. 1951) and the GALA Committee, who manufactured and manipulated loaded stage props for the 4th and 5th seasons of the well-known television series 'Melrose Place'.

Having grown up with television, the younger artists in particular approach the medium from the position of the specialised viewer. They pursue a fascination for the dethroning of the serious (Sontag), for the stylistic howlers of image cultivation, and the opulence of surface splendour. As consumers of television, they return the ball to the opposing court and mirror the medium. The ambivalent and exclusive mechanisms of television, its ambiguous methods of communication and an attitude of expectation emerge particularly clearly in childlike role-playing, reflecting the desire for participation and an exaggerated cultivation of image.

Artists like Kalup Linzy (b.1977) look back to television formats such as the Soap or the Casting-show. In his videos, reflecting upon childhood experiences, Linzy performs all the female main characters, if notalso all supporting roles. He performs with the knowledge that his brand of drag would be quite unlikely in „real' television, while also repeating clichés and phrases bound to television and the enforced desire of intensity and fame. This attention to forms that shape desire is an aspect that one could also track in the work of Francesco Vezzoli's (b.1981). Ryan Trecartin (b. 1981) picks up language, aesthetics and characters from the Internet and computer games as much as from TV. He blends stories and realities so much that they become quasi-abstract images.

To give these various perspectives on television a framework Simon Denny (b. 1982) has developed a setting for the exhibition. His exhibition design works with the paradox that the television industry, being so strictly bound to the present, does not leave relics behind. Denny integrates the exhibition architecture with parts of stage sets from current television-shows borrowed from local TV-production company Brainpool, offsetting the art-object/sets by Mel Chin and the GALA committee with non-relics form the industry.

The exhibition was conceived by Simon Denny, Kathrin Jentjens and Anja Nathan-Dorn. Simon Denny currently holds a studio-stipend from Kőlnischer Kunstverein and the RheinEnergie Stiftung Kultur.