Signal. Inspired by the idea that a transmission broadcast into a closed society can instigate change, Trubkovich employs an image of the analogue signal as the unifying formal component to this body of work. The signal acts as the symbol for escape and desire, themes constant in Trubkovich's investigations and practice. 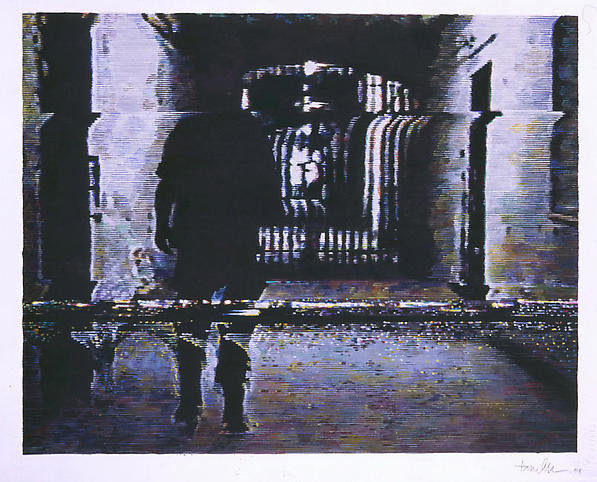 Marianne Boesky Gallery is pleased to present a project show of new paintings and drawings by Kon Trubkovich. Inspired by the idea that a transmission broadcast into a closed society can instigate change, Trubkovich employs an image of the analogue signal as the unifying formal component to this body of work. The signal acts as the symbol for escape and desire, themes constant in Trubkovich's investigations and practice.

The paintings, all self-portraits, accurately depict the blurred, disjointed and transitional images that occur when a video signal is paused. The results produce a flattening of the surface by presenting the pictorial space as a screen, suggesting that the subject is one step removed from reality. The artist paints himself in blurred images as a way to explore his own history, memory and identity while at the same time tackling the painters' dilemma between the illusory conventions of figurative painting and the subjective nature of color and form in abstraction.

Because the analogue pause is always a unique grab, the accidental or intuitive nature of the freeze gesture, which selects or locks the image, references abstract expressionism via an electro magnetic filter. Further distancing the artist as subject in these self-portraits, the distortions of the pause purposely erase his identity, allowing the viewer to impose or project his or her own ideals, histories and memories onto the paintings. The distorted blankness of the subject illustrates the collective ambiguity of the post soviet generation that the artist belongs to.

Trubkovich's "No Signal" drawings depict the analogue signal itself as static, representing the end or the beginning of the signal. Here for Trubkovich the signal is undefined and is thus most pure, indicating simultaneously a sense of emptiness and finality with that of hope and promise. Like the paintings, the drawings cannot be categorized purely as figurative or abstract, but exist on an ambiguous plane.

Kon Trubkovich was born in Moscow and now lives and works in New York. He was recently included in the exhibitions “YOUprison: Reflections on the limitations of freedom and space,” curated by Francesco Bonami at Fondazione Sandretto Re Rebaudengo in Turin, “On the Road” at Artpace in San Antonio, curated by Jens Hoffmann, and “Telling Stories” at the Kunsthalle Exnergasse – WUK Werkstatten und Kulturhaus in Vienna. In 2007, Trubkovich was included in “Six Feet Under” at the Kunstmuseum, Bern and “Uncertain States of America – American Video Art in the 3rd Millennium,” curated by Daniel Birnbaum, Gunnar B. Kvaran, Hans Ulrich Obrist, at the 2nd Moscow Biennale of Contemporary Art. The artist had his debut solo show at P.S.1 in “No Country for Old Men,” curated by Neville Wakefield in 2006.

For further information or images, please contact Anne Rana at 212.680.9889 or annie@marianneboeskygallery.com.