The exhibition features the work of Roe Ethridge, Elad Lassry, Alex Prager, and Amanda Ross-Ho, all of whom engage photography as a medium with fluid borders between editorial work, film, and art. Their pictures-shot in the real world, posed in the studio, or culled from pop culture and the movie industry-constantly shift contexts, often circulating from the magazine page to the wall. 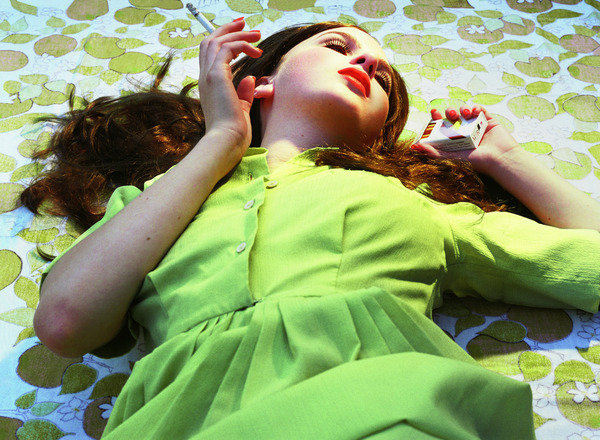 For New Photography 2010, The Museum of Modern Art highlights four artists in its annual showcase of significant recent work in contemporary photography, with the 2010 edition marking the 25th anniversary of the series.

The exhibition is on view from September 29, 2010, through January 10, 2011, and features the work of Roe Ethridge, Elad Lassry, Alex Prager, and Amanda Ross-Ho, all of whom engage photography as a medium with fluid borders between editorial work, film, and art. Their pictures—shot in the real world, posed in the studio, or culled from pop culture and the movie industry—constantly shift contexts, often circulating from the magazine page to the wall.

New Photography 2010 is organized by Roxana Marcoci, Curator, Department of Photography, The Museum of Modern Art.

Since its inception in 1985, the New Photography series has introduced the work of over 70 artists from 16 countries. The Museum continues this tradition of highlighting significant accomplishments in contemporary photography with this year’s edition featuring four artists and 36 works of photography and film.

“These artists engage in a kind of post-appropriative practice,” explains Ms. Marcoci. “If in the 1970s Richard Prince questioned notions of originality by rephotographing advertising images and presenting them as his own, this younger group of artists reinvest in photographic authorship, creating pictures that often exist simultaneously as commercial assignment and artwork. They recognize photography to be a fluid medium.”

Roe Ethridge (American, b. 1969), who studied photography at The College of Art in Atlanta, takes his shoots in “editorial mode,” directly borrowing images already in circulation, including outtakes from his own commercial work. Drawing upon the traditions of descriptive photography and photography as a resource of mass imagery to be duplicated and recombined, the artist orchestrates visual fugues: a plain white plate grabbed from Bed Bath & Beyond’s website is superimposed on a checkered Comme des Garçons scarf; a model dressed in an Alexander McQueen shirt poses against a tripod at Pier 59; two filmic pictures of a Juilliard ballet student were initially published in Vice magazine; a model from the Chanel Spring ’09 fashion show is culled from The New York Times; a pumpkin sticker is shot in close-up view and magnified; a red bag is featured in a corner of the artist’s studio; and a still life displays moldy fruit. Abandoning conventional photographic aesthetics in favor of intentionally inconsistent modes of representation, Ethridge’s pictures acquire their distinct meaning from the salient way they are reshuffled, sequenced, and laid out.

Elad Lassry (Israeli, b. 1977) defines his practice as one consumed with pictures, meaning with generic images culled from vintage picture magazines or film archives. After attending CalArts as a film student, the artist earned an MFA from the University of Southern California. Tapping into the visual culture of still and motion pictures, Lassry’s practice is as much engaged with the history of building stories with images as with the ghosts of history that persist long after images have been lifted out of their original context. Lassry demands viewers to rethink what it means to arrive at a point visually. His vibrantly colored pictures—studio portraits of friends and celebrities, still life compositions, and photocollages—never exceed the format of a magazine spread and are displayed in matching frames that derive their color from the dominant hues in the photographs. In their deadpan objecthood and Pop subject matter, Lassry’s images mimic the condition of non-art; yet his most direct shots are upended by an occasional blur, double-exposure, or the sandwiching of multiple negatives. Lassry often places his photographs beside 16-mm film projections. Untitled (2009), featuring Eric Stoltz in the role of choreographer teaching steps to a dancer dressed in red bodysuit, heightens the tension between stillness within the moving image and the temporality of the static image. A deft explorer of the relationship between image and picture, Lassry perks up the seductive language of film and advertising with a touch of subversive conceptualism.

A self-taught photographer, Alex Prager (American, b. 1979) takes her cues from pulp fiction, the cinematic conventions of movie directors such as Douglas Sirk and Alfred Hitchcock, and the stylized fashion works of Guy Bourdin to construct images that are intentionally loaded, not unlike silent movies. Her unnerving narratives feature women disguised in synthetic wigs, dramatic makeup, and retro polyester attires. Shot from unexpected angles and dramatically lit, her crisp, boldly colored photographs offer a feeling of disquiet. Crowd #1 (Stan Douglas), one in a series of pictures shot for the November 2010 issue of W magazine, makes its debut here. It draws from Stan Douglas’s Hastings Park, 16 July 1955 (2008), among other sources, but Prager has enlisted a new cast of characters, dressed in 1970s outfits (which she selected), and shot the scene in her own signature style. The exhibition also presents the U.S. premiere of Prager’s debut film, Despair (2010). This four-minute film starring the actress Bryce Dallas Howard is, according to the artist, a “full-sensory version” of her photographs. Set in 1960s Los Angeles to a score by composer Ali Helnwein, this short is inspired by the 1948 film The Red Shoes, about a prima ballerina whose obsession with dance conflicts with her need for love, ultimately leading to her suicide. Focusing on the actress’s face to capture one intense emotion, Prager’s construction of images is intentionally loaded, reflecting her fascination with, and understanding of, cinematic melodrama.

Amanda Ross-Ho (American, b. 1975) received a BFA from the School of the Art Institute of Chicago and an MFA from the University of Southern California. Nodding to various stages of the creative process, her distinctive installations typically include a mix of collages, assemblages, mural-scale inkjet prints of studio residues, and hand-drilled Sheetrock panels propped against the wall that function like architectural backdrops. The Sheetrock panel in this exhibition is lined up with found images scanned from the pages of craft manuals and photography textbooks, but also includes pictures that have familial significance, such as a gelatin silver print portrait taken by the artist’s mother in the 1970s, and a reprint from a large color transparency of a composition with glasses, originally taken by her father in the context of his work as a commercial photographer. Ross-Ho grew up in a family of photographers, both commercial and artistic. As a child she spent time with her mother while she worked in the darkroom, and often stood as a model for test shots taken by her uncle and father. Within this framework of relationships, Ross-Ho renegotiates the definition of craft processes and commercial photography in contemporary practice.

Sponsorship:
The exhibition is made possible by the Carl Jacobs Foundation.