An exhibition of new installations, light works, sculptures and prints. A series of eight carbon prints that depict various details and perspectives of the Roden Crater project and two bronze and plaster models that representing the 'North Moon Space' area of the observatory will also be on view. And olso recent installations from the Ganzfeld series or 'Bindu Shards', a part of the ongoing Perceptual Cells series. 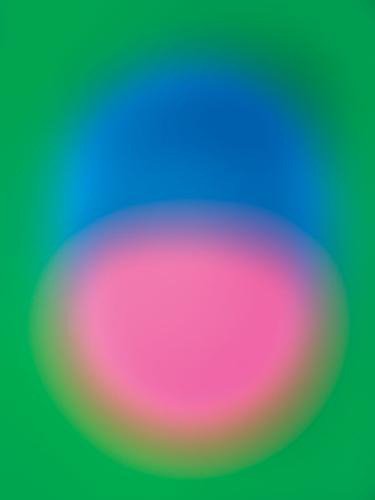 Through light, space can be formed without physical material like concrete or steel. We can actually stop the penetration of vision with where light is and where it isn't. Like the atmosphere, we can't see through it to the stars that are there during the day. But as soon as that light is dimmed around the self, then this penetration of vision goes out. So I'm very interested in this feeling, using the eyes to penetrate the space.
--James Turrell

Gagosian Gallery is pleased to present an exhibition of new installations, light works, sculptures and prints by James Turrell. This is his first exhibition with the gallery.

For more than forty-five years, Turrell has explored the myriad possibilities of using light as a medium of perception. His formally simple works draw attention to the limits of seeing while seeking to expand the wordless thought that they provoke. Throughout these permutations, the light that is normally used to illuminate other things is assigned form and structure, making it the subject of the revelation. Since pursuing studies in perceptual psychology during the 1960s, Turrell has been exploring a variety of perceptual phenomena, ranging from sensory deprivation to intense optical effects. Early works such as Afrum-Proto (1966) and the Mendota Stoppages (1969-1974), which employed planes of light in relation to architecture, became the basis for ongoing investigations. He continues to use light as his primary subject and material, with its inherent allusions to painting and sculpture.

Since the early 1970s, Turrell has worked to transform the Roden Crater in Arizona into a naked-eye observatory that reconceives the landscape as a multisensory experience. This epic project is represented in the exhibition by a series of eight carbon prints that utilize the earliest of nineteenth-century color-photographic methods. Composed of powdered pigment, the prints depict various details and perspectives of the Roden Crater project. Two bronze and plaster models representing the “North Moon Space” area of the observatory will also be on view.

Recent installations from the Ganzfeld series map a new landscape that takes form using light projected into space. This new landscape without horizons is one that is increasingly explored in navigation through clouds and fog, scuba diving, skiing in whiteout conditions, flight in space, and the technical dimensions of though, such as Boolean logic, which can also be encountered in meditation. The imageless and formless landscape of Dhatu (2010) yields an emptiness filled with light that allows the viewer to feel its physicality. Light like this is seen rarely with the eyes open, yet it is familiar to that which can be apprehended with the eyes closed in lucid dream, deep meditation, and near-death experiences.

The relation of exterior light to interior light is explored further in the work Bindu Shards (2010), a fully immersive visual and auditory work to be experienced by one person at a time. Part of the ongoing Perceptual Cells series, Bindu Shards possesses the same invasive qualities of “behind-the-eyes” seeing as could be experienced in Gasworks (1993) which was first shown at the Henry Moore Sculpture Trust in Halifax, and then at the ICA, London in 1996. In the late 1980s, Turrell resumed work on the Perceptual Cells, which stemmed from his university studies, then continued from 1968 through 1970 as a collaboration with the artist Robert Irwin and two psychologists. Each cell stimulates an experience in which there is no object of perception; the light which is presented is light "not seen.” This produces the “Purkinje effect,” a transitional patterning that is perceived uniquely during the transition from light to dark. Together with the Dark Space series begun in 1983, Shards shares this dissolving of the juncture between the light outside and the light inside. During the eight to twelve minutes required for the eyes to adapt to darkness, the realm where the difference between “in-front” and “back-of-the-eyes” seeing dissolves and allows the iris to open.

Turrell’s holographic works further blur the theoretical properties of light by creating the illusion of tangibility. In a series of holographic works -- two reflective and two transmissive -- planes of light are manipulated in the same manner as the earliest Projection series from the 1960s where light first became Turrell’s primary medium.

James Turrell was born in 1943 in Los Angeles. He received a Bachelor of Arts degree in experimental psychology at Pomona College at Claremont, California in 1965, followed by a Master’s degree in Art from Claremont Graduate School in 1973. His work is represented in numerous public collections including the Tate Modern, London; Los Angeles County Museum of Art; the Solomon R. Guggenheim Museum, New York and the Israel Museum Jerusalem. The James Turrell Museum opened in Colomé, Argentina in 2009. His solo exhibitions include Stedlijk Museum (1976); Whitney Museum of American Art, New York (1980); Israel Museum (1982); Museum of Contemporary Art, Los Angeles (1984); MAK, Vienna (1998-1999); Mattress Factory, Pittsburgh (2002-2003); and “The Wolfsburg Project” (2009-2010), Kunstmuseum Wolfsburg, Germany. A major retrospective will open at the Solomon R. Guggenheim Museum, New York in 2012, traveling to the Los Angeles County Museum of Art and the Museum of Fine Arts, Houston, among other venues.