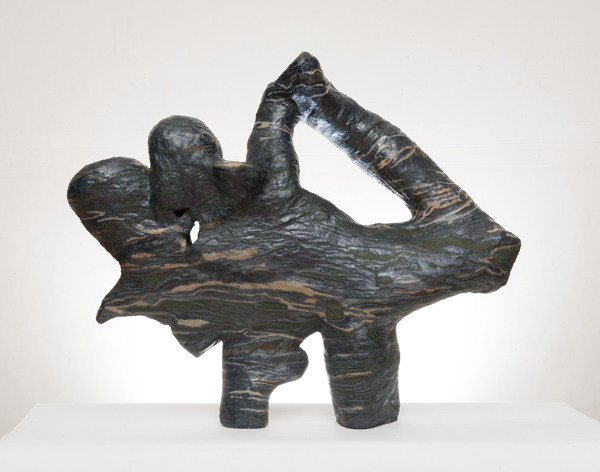 Timothy Taylor Gallery is proud to announce the first exhibition outside the US by Portland based artist Jessica Jackson Hutchins, who earlier this year won great critical attention for her contribution to the 2010 Whitney Biennial, and two simultaneous New York gallery exhibitions. For this exhibition at Timothy Taylor Gallery, Hutchins presents new works including several large-scale and medium-scale sculptures, an exquisite set of works on paper as well as a group of large-scale mono-prints.

Hutchins’ mixed media sculptures, ceramics, prints and works on paper are a curious combination of physical gusto tempered by great fragility. Her works act as containers for a wide range of themes; popular and personal, sad and humorous, but always grounded in the ‘messy’ business of human relationships.

Unlike many of her contemporaries working in sculptural assemblage, Hutchins avoids knowing quotations from post-war art movements such as Pop Art or Minimalism, and concentrates instead on a more specifically humanist subject matter. Drawing material from a wide range of sources, from occult beliefs, to sports stars and musical heroes, Picasso’s Blue Period and the ceiling of the Sistine Chapel, Hutchins’ interests and references are determinedly eclectic and wide-ranging.

Hutchins regularly uses her own or found furniture in her Practice; a process which further underlines the strongly anthropomorphic quality in much of her work. Wedding Present, 2010, is made from two green armchairs, an actual wedding present given to her parents, upon which sits a ceramic vessel. Tantalisingly human in its scabrous physicality, it dents the cushions with its actual weight. Upon the chair’s velvety sides Hutchins’ expressive daubs of plaster and ink suggest a landscape. Her canny use of everyday personal objects and materials hint at the great dramas of love and family, whether as tragedy or farce, yet Hutchins keeps her references oblique and mysterious, allowing formal qualities free rein to create their own abstract and tactile languages.

Often turning household objects into print making surfaces, Hutchins will present a series of prints made from her own grand piano lid. These dramatic large prints have surfaces etched with feathery delicate lines, graffiti-style sexual imagery and obscure texts, combined with an accrochage of textiles, petals, ceramic cups and vases, a poignant rendering of the interplay between popular music, sex and romance.

Hutchins frequently sources imagery of sporting heroes and other figureheads of popular culture where narratives of human endeavour, triumph and tribulation abound. Champions, 2010, is a remarkable large-scale ceramic inspired by the image of an ice skating couple, transformed formally and visually into a totemic figure of movement and grace, while the glaze that covers the surface somehow speaks of slow time – it looks like ancient stratified rocks or the marbled surface of a distant planet. As Stephanie Synder (Artforum) observes, the works ‘radiate an intoxicating experimental energy. Hutchins is interested in pure, bare life – in pain and ecstasy’.

Jessica Jackson Hutchins will be in conversation with Emma Dexter at Timothy Taylor Gallery on Tuesday 12th October at 5pm.

Coinciding with Jessica Jackson Hutchins, Timothy Taylor Gallery will present a new series of small-scale paintings by the Berlin based American artist, Ryan McLaughlin. McLaughlin’s paintings will be on display from 13 October to 6 November in the gallery’s Viewing Room.

On Saturday 16 October 2010, Timothy Taylor Gallery will be holding a talk about Ryan McLaughlin’s work starting at 10:30, followed by a brunch until midday in association with Ceri Hand Gallery.

Timothy Taylor Gallery is delighted to present a solo exhibition of new paintings by Berlin- based, American artist Ryan McLaughlin. In recent years McLaughlin's paintings have taken their inspiration from a range of sources including historical and imagined sports heroes of the American baseball leagues, modern medicine, and amateur botany.

Characterised by fixed rules, codes, and subsequently a lack of ambiguity, these areas of interest and their accoutrements are completely at odds with the nebulous nature of painting practice. McLaughlin's compositions inhabit and acknowledge this zone of difference - between logic or rational systems and the absurdities of image making - and celebrate the irony of affirmation.

The gossamer focus and warm golden spotlighting with which the artist imbues his paintings generates a sense of nostalgia and suggest bygone glories often staged in bucolic settings. McLaughlin invests his chosen objects, be it an animated broom, a hovering sports shirt, or a sedate classical vase, with anthropomorphic qualities. His use of robust strokes of paint add further vigour to his whimsical but heartfelt surrogate subjects.

In his ‘collage’ series of paintings invented generic pictorial elements are painted in the manner of a still life via a form of shorthand illustrative notation. Recalling compositional aspects of early analytical cubism and the stylistic qualities of Punch and New Yorker cartoons, these paintings communicate the idea of an image as it might look in the minds eye. The format and relatively small scale of these works is such that they evoke souvenir postcards, serving as they do as signs of a past visual experience.

Nantucket Collage (2010), which features a lighthouse, seagull, patches of seersucker and navy blue blazer, functions as an aspirational mise en scene, complete with all the tasteful and picturesque elements necessary for coastal leisure activities. Operating in a similar manner, Fancy Evening Collage (2010) suggests the evidence of a decadent soirée complete with tuxedo, a €500 note, lipsticks stains, and martini glasses.

Ryan McLaughlin was born in 1980 in Worcester, MA. He now lives and works in Berlin. He graduated from B.F.A Rhode Island School of Design in 2003. Recent solo exhibitions include Nottle, Lüttgenmeijer, Berlin (2009); Robinson, Groeflin/Maag, Zurich (2008); Finley Park, Alexandre Pollazzon Ltd., London (2007). Recent group exhibitions include Waking the Dead, Autocenter, Berlin (2010); When the Mood Strikes... The Collection of Wilfried & Yannicke Cooreman-de Smedt, MDD Museum Dhondt-Dhaenens, Deurle, Belgium (2009); I Was Lookin' Back to See if You Were Lookin’ Back at Me to See Me Lookin' Back, Loraini Alimantiri-gazonrouge, Remap 2, Athens, Greece.

This October Timothy Taylor Gallery will also show the first exhibition outside the US by Portland-based artist Jessica Jackson Hutchins, who earlier this year won great critical attention for her contribution to the 2010 Whitney Biennial, and two simultaneous New York gallery exhibitions. For this exhibition Hutchins will present new works including several large- scale and medium-scale sculptures, an exquisite set of works on paper as well as a group of large-scale mono-prints.

On Saturday 16 October 2010, Timothy Taylor Gallery will be holding a talk about Ryan McLaughlin’s work starting at 10:30 AM, followed by a brunch until midday in association with Ceri Hand Gallery.