Probe. Central to the exhibition are Kelly's arresting new series of works incorporating scale models of real museums and galleries, including Frank Lloyd Wright's Guggenheim in New York and London's Tate Modern. Constructed from traditional items of artists' equipment such as easels, brushes and portfolio tubes, these pieces are intended to quietly question the ideologies of the institutions they portray. 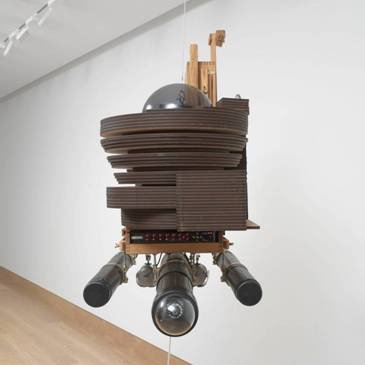 Agnew’s Gallery is delighted to announce its first exhibition of the work of John Kelly, the Australian artist best known to date for his eight metre high ‘Cow Up A Tree’ bronze first exhibited on the Champs Élysées in Paris to mark the millennium. Kelly has always had an idiosyncratic take on the subjects he broaches, and his sculptures on show will reflect a typically humorous and anarchistic streak. Yet the assembled works will also demonstrate Kelly’s more recent tendency to use unusual, stark materials in his exploration of pressing artistic and political issues.

Central to the exhibition will be Kelly’s arresting new series of works incorporating scale models of real museums and galleries, including Frank Lloyd Wright’s Guggenheim in New York and London’s Tate Modern. Constructed from traditional items of artists’ equipment such as easels, brushes and portfolio tubes, these pieces are intended to quietly question the ideologies of the institutions they portray. Kelly’s first-hand experience of the strict conformity required by major arts organisations was the subject of his earlier ‘Logo’ series, and small CCTV cameras occupying his museum models – which will silently scan the surrounding gallery space at Agnew’s – also underline the irony of institutional attempts to homogenize artistic creation.

The distinct autobiographical aspect present in Kelly’s work will also be brought to the fore at the exhibition. As well as encounters with the art establishment, the artist’s relationship with his parents is touched upon; in Mum & Dad@Tate Modern, two tiny screens show Kelly’s Irish father and English mother talking about their son’s early life.

As is characteristic of Kelly’s wider body of work, the sculptures on show at Agnew’s will invite interpretation on more than one level. The flavours of wit and irony that permeate many of the pieces on display represent a constant throughout Kelly’s career. Suspended from the ceiling or raised up on easel legs, many of Kelly’s sculptures occupy a very ‘human’ space, allowing the intricacies and beauty of their design and construction to be viewed at close quarters, and from almost every angle.

Elements of modern technology that jostle for room with traditional artists’ materials in Kelly’s sculptures will serve to highlight the debate about conventional artistic practices in contemporary art.

John Kelly was born in Bristol in 1965, and emigrated to Australia with his family in the same year. Having completed a BA in Visual Arts Painting at the RMIT University in Melbourne, followed by an MA, Kelly took up a place at the Slade from 1996 to 1997. He had his first solo show in 1988 at Niagara Galleries, Melbourne, and his first UK solo show in 1995 at the Piccadilly Gallery, London.

Kelly has since exhibited at Les Champs de la Sculpture in Paris (2000), at Monte Carlo’s Parade des Animaux (2002), and at China’s Guangzhou Triennial (2008). His work is also represented in the National Gallery of Australia and the Art Gallery of New South Wales, and is characterised by its exploration of Australian history and of ‘the logo’ as a symbol of anti-artistic oppression.

For further information and images please contact Will Paget and Sophie Money at PagetBaker Associates:
0207 323 6963 or monique@pagetbaker.com