The 2010 exhibition features some 70 of the major works chosen by the artist in 1932 as it seeks to reconstruct his retrospective presentation of his own oeuvre. It is accompanied by a catalogue that traces the history of the exhibition, its influence on Picasso's reception and the controversy surrounding him at the time, and its exemplary significance for the relationship among artists, art dealers, museums and cultural institutions from the early 20th century to the present day. 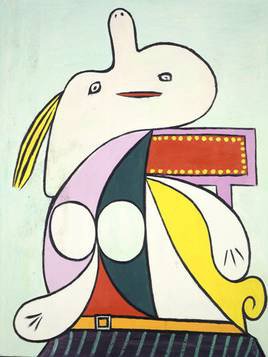 From 15 October 2010 until 30 January 2011, the Kunsthaus Zürich will revive the first museum exhibition devoted to Pablo Picasso. Mounted at the Kunsthaus Zürich in 1932, the show was a crucial moment in the history of modern art. Picasso had organized a very personal look at his work, with pieces chosen from his pink and blue periods and his Cubist and neo-classical phase as well as Surrealist creations, and the homage now on show reconstructs this subjective survey. With 100 works from celebrated international collections it offers an outstanding overview and is on display exclusively in Zurich.

THE FIRST RETROSPECTIVE: STAGED BY PICASSO HIMSELF
Pablo Picasso (1881-1973) had his first-ever museum retrospective in 1932 at the Kunsthaus Zürich, comprising 225 of the most important paintings created during the first three decades of the Spanish master’s career. The works were selected, not by the director, but by Picasso himself. It was a veritable revolution in the art world. Every phase of an eventful artistic career was represented. There were pictures from his early days as well as from his blue and pink periods, while his explosion onto the Cubist stage enjoyed greater prominence than his ensuing ‘urbane’ classical period. His most recent pieces, including his encounter with Surrealism, his magisterial large still lifes, and the series of portraits of Marie-Thérèse Walter, Picasso’s young lover, were particularly showcased.

TRIBUTE WITH MASTERPIECES
With its homage to the early retrospective, the Kunsthaus Zürich evokes the background of the exhibition and demonstrates its influence on the reception of the world-famous artist. Such renowned museums as London’s Tate, New York’s Museum of Modern Art and Metropolitan Museum, and the Centre Georges Pompidou in Paris have contributed pieces, to be shown together with works on loan from private collections of international significance. Among the pieces rarely seen in Europe and a high point on the chronological course set out by curator Tobia Bezzola is ‘Le peintre et son modèle’, on loan from the Contemporary Museum of Art in Teheran. Measuring 214 x 200 cm, it will be the largest painting on display at the Kunsthaus today, just as it was in 1932.

EARLY WORK, BLUE AND PINK PERIODS
The exhibition opens with art by the young Picasso, created under the influence of Gauguin, van Gogh and the Old Masters. Inspired by the work of Toulouse- Lautrec and his initial sojourns in Paris, Picasso produced some colourful scenes of big city life, without yet demonstrating an independent style. In the fall of 1901 Picasso began to paint using mainly blue-green and blue-violet shades in moody works expressive of melancholy and depression. The subjects of his blue period are society’s losers: syphilitic mothers, driven to a life of crime and accompanied by their broods; prostitutes and beggars. Picasso included in the show only a few works from this period, and was equally sparing with examples of the pink period that followed it in 1905. Indeed, the painter was virtually indifferent to the early work that is held in such high esteem by today’s viewers. For him, his Cubist breakthrough marked the inception of his true career.

CUBISM, CLASSICISM AND SURREALISM
Picasso developed this new visual language together with Georges Braque. The current exhibition presents Picasso’s Cubism by dividing his work between 1907 and 1920 into three phases: the analytical, the synthetic, and the Late Cubist. Picasso frequently worked with several techniques simultaneously, and his classicist style, for instance, is visible in his production of 1917 and 1918, as well as ten years later. In the 1920s he became friends with the Surrealist poets André Breton, Louis Aragon and Tristan Tzara, and, although not an official member of the movement, participated in Surrealist activities and exhibitions. His Surrealist period, in which the formal language of Late Cubist and classicist motifs was supplanted by new and fantastical compositions, began in the late 1920s and lasted beyond the Zurich retrospective until 1937.

1932 REACTIONS
The avant-gardist’s subjective take on his extraordinary oeuvre was shown at the Kunsthaus Zürich from September to November of 1932, and was greeted with great interest by the public. The press tracked the artist’s every move from the moment he arrived in Zurich, his wife Olga and son Paulo in tow, five days before the show opened. Not everyone was equally prepared to recognize Picasso’s genius, however: in the ‘Neue Zürcher Zeitung’ the world-famous psychologist and psychotherapist C.G. Jung pronounced the painter, then fifty years old, schizophrenic. The entire permanent collection of the Kunsthaus was removed to make way for more than 200 works by Picasso, 56 of them from the artist’s own collection. Oskar Schlemmer, among other painters, was amazed at the show’s ‘record business’, which saw it extended for two weeks and visited by 34,000 people during its nine-week run – generally esteemed a success. Although the museum’s outlay on the exhibition far exceeded its revenues, a trend that continues to this day, the Kunsthaus was nevertheless able to acquire one of the paintings for sale at the show – ‘Guitare sur un guéridon’ (1915) – and thus lay the cornerstone for the collection of Picassos that are today on view at the Kunsthaus among works by other proponents of classical modernism.

EXCLUSIVE AND ONLY IN ZURICH
In addition to 74 paintings, the main exhibition room will also have on display the four sculptures seen at the original retrospective. The whole is supplemented by a selection of some 30 of the drawings shown in 1932, whose motifs (portraits, mythological scenes, still lifes and nudes) echo those of the paintings while also inviting the viewer into the worlds of the circus and the dance. The historical significance of this expensive and logistically complex exhibition, together with its selection of individual pieces, makes it a one-of-a-kind event. ‘Picasso’ will be on show exclusively in Zurich. The exhibition is the high point in the Kunsthaus Zürich’s anniversary programme, celebrating the inauguration 100 years ago of the building by Karl Moser in which Picasso’s first retrospective was held.

ART EDUCATION: CATALOGUE, GUIDED TOURS, WORKSHOPS, AUDIOGUIDE
Thanks to their own exhaustive research, the curators, led by Tobia Bezzola, have been able to identify all of the pieces on show in the original exhibition. A comprehensive index and texts on the works’ reception, covering the 1932 retrospective’s development, scope and impact, is available in the form of a catalogue accompanying the exhibition (Prestel Verlag, 288 pp., 300 colour ill.). Containing essays by Tobia Bezzola, Christian Geelhaar, Simonetta Fraquelli and Michael FitzGerald, as well as a facsimile of individual elements of the 1932 exhibition catalogue, the publication can be purchased for CHF 55 at the Museum Shop.
The accompanying art education programme is comprehensive and can be consulted in detail on the exhibition website. It builds on research by art historians and is keyed to the various needs, educational backgrounds and abilities of children, young people and adults. In addition to public guided tours offering both surveys and specific focuses, the programme includes a range of workshops and conversations as well as a separate offering for schools.
Admission includes an audioguide (English/German/French/Italian) allowing visitors to adapt the type and level of information received on their tour to their individual needs.