The Espai d'art Contemporani de Castello' has invited Dan and Lia Perjovschi to create a project for the Centre and its context, which will be the first specific project ever presented by these two artists in Spain. From the 1980s onwards, the work of Dan and Lia Perjovschi has been unique in the development of experimental art in Eastern Europe. Both artists have forged personal and challenging forms of visual expression in drawing, performance, installation and conceptual practices. 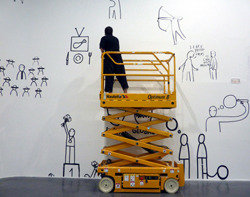 The EACC (Espai d’art Contemporani de Castelló) has invited Dan and Lia Perjovschi to create a project for the Centre and its context, which will be the first specific project ever presented by these two artists in Spain.

From the 1980s onwards, the work of Dan and Lia Perjovschi has been unique in the development of experimental art in Eastern Europe. Both artists have forged personal and challenging forms of visual expression in drawing, performance, installation and conceptual practices, as well as in the analysis and use of the mass media, particularly of television and the written press. Reaching a point of maturity under the double pressure of Socialism and Globalisation, their work can be divided into two mutually enhanced phases: firstly, prior to the Romanian Revolution, defined by a more private and intimate body of work, then followed by a more public art practice addressing universal concerns.

The Perjovschis were born in 1961 in Sibiu, a city located at the geographical centre of Romania. They met in their childhood in art schools and later became a couple in life. They both graduated in 1980 and Dan entered the Academy of Art in Iasi, in Eastern Romania. From 1980 to 1985, Lia remained in Sibiu, working in factories while sitting for the annual exams to enter the country’s art academies, which she failed time and again, partly in reprisal for her anti-authoritarian attitude and partly for the cronyism prevailing in the totalitarian system. She eventually entered the Academy of Art of Bucharest in 1987.

The Romanian Revolution started on 16th December 1989 in Timisoara, West Romania. On 20th December it had already spread to other cities. On Christmas Day 1989, the dictatorship Nicolae Ceausescu and his wife Elena were executed by a firing squad. In 1993, Dan moved to Bucharest and in 1993 Lia graduated at the Academy. In the 1990s, the Perjovschis became increasingly prominent both at home and abroad.

Dan’s reputation in Romania was first established by the political drawings and cartoons he started to create in 1991 for the magazine Revista 22, a leading publication of the Romanian resistance, founded by the Social Dialogue Group of which he was a member. Nowadays, he is known worldwide for his large-scale drawing installations, in which he used the psychology of humour to comment on the social, political and cultural conditions, from local and national topics to global ones.

Lia has been recognised as one of the leading performance artists in Romania, and is also known for her unusual objects. From the 1990s, she has been gradually focusing more on conceptual projects such as Timelines, Mind Maps, and Knowledge Museum, that follow historical and intellectual events and ideas, and on collections such as the Globe Collection, commenting on media and on consumerism.

On another note, Dan and Lia Perjovschi’s practice has deep roots in performance art. This exhibition project is accompanied by a 60-min documentary video showing the performances developed by the two artists from 1987 to 2007.

Seminal pieces will be on view here, including, Lia’s I Am Fighting For My Right to Be Different, a performance in which the artist interacts with a life-size doll, manipulating it to reflect her own body language in a work that is directly connected with issues recurrent in her work.

The documentation of Dan’s performances is equally resonant and portend his current body of work. One of his videos show a large-scale series of charcoal drawings made on a wall, with the artist using his recurrent grid of character drawings. Members of the public take turns to erase sections of the grid, with Dan struggling to restore the “missing” figures by redrawing them.

For nearly thirty years now, Dan and Lia Perjovschi have created an art that remains true to themselves and to the history of their country. They have produced highly different pieces, and in the guise of the DanLia composite, they have thrown light, from one to the other, over their meaning. They have also represented other artists from Romanian society and have attempted to bring transparency to global issues through art.

Aesthetically and politically charged, their work helps the beholder to reflect, to feel and to smile, a crucial combination in a political and cultural situation where concerns affecting freedom and autonomy, the construction of knowledge and a need to confront the present-day experience with simplicity, are increasingly more demanding. Dan and Lia Perjovschi’s practice deals with crisis, change and with the integrity that, beyond the personal, is required to involve oneself in the world and inspire spectators to live with courage.

Born in Sibiu, Romania in 1961. He lives and works in Bucharest.
His solo exhibitions include: Late News, ROM, Toronto and Drawing Institute, San Francisco Art Institute, San Francisco (2010); What Happened to US?, MoMA, New York and I am not Exotic I am Exhausted, Kunsthalle Basel, Basel (2007) and The Room Drawing, Tate Modern, London (2006). He participates at group shows like Lyon Biennial (2009); Sydney Biennial (2008); 52nd Venice Biennial (2007) and the 9th Istanbul Biennial (2005).
In 2007 she had her first retrospective exhibition, States of Mind, at Nasher Museum of Art, Duke University.
Perjovschi received George Maciunas Prize in 2004..

Espai d'art contemporani de Castelló
Prim s/n 12003, Spain
Open to the public from Tuesday to Sunday from 10 am to 8 pm.
Closed on Mondays and public holidays.