A Dream of Modern Art. The exhibition reveals how Courbet, from a starting point in German Romanticism, realized the vision of a poetic art of Modernity, later to be further developed by Cezanne and Picasso, as well as in the schools of Symbolism, Surrealism, and Magic Realism. Why so many contemporary artists refer to Courbet may also result from the somnambulistic sensualism, which many of Courbet's works radiate, and their immersion into remote areas concealed from the outside world. Curated by Klaus Herding. 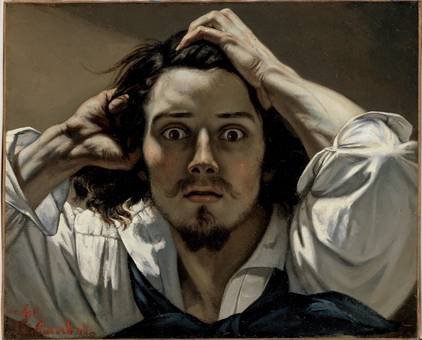 The French painter Gustave Courbet (1819–1877) ranks among the most fascinating nineteenth- century artists. He is regarded as the crucial pioneer of political realistic painting and as a revolutionary of the Paris Commune. But Courbet also had an entirely different side: he was one of the great dreamers in history. In his portraits, but also in his landscapes, drawings, and still lifes, he depicts a world of absorption and introversion – in stark contrast to the frenzied industrialization of his age. One hundred works from eleven countries – among them loans from Stockholm, Paris, Montpellier, Los Angeles, New York, and Oslo – will present this “other” Courbet for the first time in the Schirn Kunsthalle Frankfurt from October 15, 2010 to January 30, 2011.

Curated by Professor Klaus Herding, the exhibition reveals how Courbet, from a starting point in German Romanticism, realized the vision of a poetic art of Modernity, later to be further developed by Cézanne and Picasso, as well as in the schools of Symbolism, Surrealism, and Magic Realism. Why so many contemporary artists refer to Courbet may also result from the somnambulistic sensualism, which many of Courbet’s works radiate, and their immersion into remote areas concealed from the outside world.

The exhibition will be presented under the common patronage of Christian Wulff, President of the Federal Republic of Germany, and Nicolas Sarkozy, President of the French Republic. The exhibition is sponsored by Hessische Kulturstiftung and Aventis Foundation. Additional support comes from Ernst von Siemens Kunststiftung, Georg und Franziska Speyer’sche Hochschulstiftung, Polytechnische Gesellschaft e. V., and Deutsche Bahn.

Gustave Courbet, born into a middle-class family in Ornans near Besançon in the Franche-Comté region in 1819, has always been regarded as an advocate of socially committed art. His painting “The Stonebreakers” from 1849 (probably destroyed in 1945), which shows two day laborers without covering up their wretched everyday hardship, has often been cited as an example in this context. Courbet’s work has also been associated with his engagement in the Paris Commune. It was in 1873 when the artist alone was blamed for the dismantling of the Vendôme Column erected in celebration of the Napoleonic Wars by the Paris Commune in May 1871. Before he was sentenced to pay the expenses for its re-erection, he took refuge in Switzerland, where he died in La Tour-de-Peilz on Lake Geneva in 1877.

Courbet’s contemporaries, such as the writer Jules Champfleury and the philosopher Pierre- Joseph Proudhon, considerably contributed to Courbet’s image as an advocate of Realism, which still dominates our understanding of his art. Unflinching veracity, the treatment of socio-political subjects, and the depiction of people in their daily routines are considered essential features of the Realist movement, which harked back to seventeenth-century Spanish and Dutch painting. In Germany, where during the 1850s Courbet was particularly revered in Frankfurt and Munich, he was held in even greater esteem than in France as a pioneering painter of the Realist movement. However, the definition of realism also implies a component that goes beyond the pure portrayal of an object. For, as a rule, the artist who looks at things from a realist perspective and thus renders them in a truthful fashion intends to overcome this “bad” reality by doing so: unlike naturalism, realism contains an idealistic impulse.

In the Schirn’s exhibition, this phenomenon of realism is deliberately eclipsed, whilst the focus is on a “different,” dreamy Courbet. With good cause: because even in those instances where Courbet directly referred to reality, it turns out to be a device of introversion and defamiliarization: Courbet’s portraits frequently reveal a pensive tendency toward self-contemplation; his landscapes show remote rocky and wooded scenery; his seascapes breathe loneliness; his hunting scenes suggest identification with the victim; and his still lifes lead us into an enchanted realm in which the standards of the outer world no longer apply. A substantial number of his figures are lost in dreams as they are depicted sleeping or drowsing, often expressive of some yearning that alludes to hidden desires. Courbet’s figures are rarely shown in action; now and then, the narrative rendered in a picture is interrupted; sometimes one can perceive the explosive release of intense emotion; mostly, however, soft nuances prevail.

The artist’s technique complies with this penchant for nuances. He rarely used glaring, unmixed colors. Courbet avoided unambiguousness. Frequently, a color no longer defines a specific object, but extends beyond it or even “circumvents” it while it spreads across the picture and leaves room to chance. Through his method of applying and removing paint with a palette knife, Courbet literally rendered “proper” – i.e., academic – painting impossible. One also comes across surprising conversions. A solid object (such as a rock) is depicted as something translucent, whereas a non-solid substance (like water) seems to be impermeable. Often, the painter erratically alternated between these two forms of paint application. Such methods severely unsettled nineteenth-century visual habits and have affected art production ever since, so that Courbet’s significance for us lies in this innovative approach rather than in revolutionary gestures.

Last, not least, Courbet’s paintings and drawings reveal an unusually broad emotional spectrum that includes the exposure of fright and self-doubt and encompasses his contemporaries’ traits of morbidity and suspicion as well as their feelings of superiority and self-confidence. In depicting these emotions, Courbet never once yielded to the then-prevalent dictate of idealist representation. Besides the political content of his art, the exploration of people’s inner lives pursued in his portraits and the dissolution of matter achieved in his landscapes constitute major artistic innovations. However, it is not always possible to isolate Courbet’s three fundamental accomplishments – social criticism, abstraction, and introspection – from one another, since they frequently interlock. Courbet’s saying “I even make stones think” shows how persistently he penetrated the inner nature of things in order to transform reality through poetic reflection.

How fertile the upheaval of traditions provoked by Courbet was for Manet and Cézanne, but also for Picasso or de Chirico, for Beckmann and Duchamp is evidenced by the fact that each of these artists and even numerous present-day painters such as Gerhard Richter or Neo Rauch have laid claim to completely different features of Courbet’ work as important for their production.

The exhibition is also of special importance because of the artist’s personal relationship with Frankfurt. The city had never been as close to the Paris art scene as it was with Courbet, who exhibited in Frankfurt as early as 1852. His painting “A Burial at Ornans”, which he presented in the Lederhalle, caused fierce debates. People regarded it as scandalous to depict an everyday scene such as a burial in the form of a historical painting.

After a number of further exhibitions, Courbet visited the area personally for the first time in 1858/59, staying for several months and painting such important works as “The Lady on a Terrace” and “View of Frankfurt”. He started working on one of his largest hunting pictures, “Stag Taking to the Water” (1858–1861), during his sojourn. He also made a lot of contacts and played a crucial role in the formation of a Frankfurt school of painting. He would exercise a decisive influence on such important artists as Wilhelm Leibl, Hans Thoma, and Carl Schuch, as well as on the Kronberg school of painting. Besides Courbet’s landscapes, his sea pieces from between 1865 and 1873 are a highlight of the exhibition both because of their original subject matter and their anti-civilizational thrust. In these years and particularly after the failure of the Paris Commune, Courbet came to paint self- reflective still lifes in which he pondered on life and death, and on his own end.