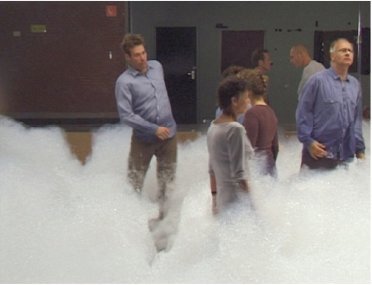 The complicated relationship between the human body and its surroundings is central to the international group exhibition Body/Space Mechanics. In film and video works four artists and one artist duo present their vision of human identity and the fraught relation between the individual and the collective. The exhibition has been organised to accompany the Madness & Arts Festival, which took place in Haarlem from 24 September through 3 October, 2010.

In Body/Space Mechanics the artists employ the body as a locus of conflict and resistance, a place where prevailing norms are opposed, assailed and breached. That happens in performances which consistently seek out limits: the physical boundaries of the body in the space in which it moves, but also the limits of social acceptance and the things that we call 'normal’.

In the work of Charles Atlas and Kouneski/Williams Gamaker the body is employed primarily to explore limits which have been defined in advance. The 8mm film Floor (1974) by Atlas shows a performer who carries out choreographed actions on a wooden floor, seeking out the boundaries of the frame of the film with his body: what falls within, and what falls outside the frame?
Scaling Copan (2009) by Kouneski/Williams Gamaker is also a recording of a performance, in which the two artists crawl over the balconies of the famous Copan Building in São Paulo on their hands and knees. Just as in the case of Atlas, what is important here is a systematic physical exploration of a specific space. In Scaling Copan the performers also expose themselves to concrete danger: the abyss is only centimetres away, and that also gives their undertaking a psychological dimension.

Other works in the exhibition have a more narrative and cinematic character, and evoke suspense and a sense of Unheimlichkeit. In Romantic Delusions (2008) by Jesper Just we see the actor Udo Kier, dressed as a transsexual, wandering through Bucharest. The loosely filmed Super8 images, that alternate street scenes with scrutinising close-ups and distance shots of the actor, create a claustrophobic world which slowly moves toward an oppressive-ecstatic climax.
A sense of alienation likewise plays an important role in the lush 1st Part Conditional (2004) by Markus Schinwald. The relation between the body and the voyeuristic gaze of the Other is here visualised in an enthralling choreography. The movements of the central figure seem to express a fierce inner struggle with the gaze of the Other.
Where Schinwald’s central figure is presented in a complex and precisely danced series of movements, the apathetic 'dancers’ in Aernout Mik’s Territorium (1999) are so withdrawn that they almost seem to be objects rather than people. This work too expresses the difficult relation between people and their surroundings, between the individual and the collective, in behaviour which collides with social conventions. The human body is explicitly used as a site where this conflict is made visible.

The exhibition Body/Space Mechanics was organised to accompany the Madness & Arts Festival 2010, an art festival which focuses on the relation between art and madness. After Toronto (2003) and Münster (2006), this year the festival took place in Haarlem.

The British artist Nathaniel Mellors (b. Doncaster, 1974) produces installations with animatronic sculptures and satirical videos in which humour and language are central. In recent years he has developed an experimental practice which combines video, sculpture, performance, theatre and critical writing. Work by Nathaniel Mellors was previously to be seen in De Hallen Haarlem in the Recent Acquisitions exhibition in 2009/2010. In 2008, the museum acquired his video installation The Time Surgeon (2007). For his current presentation in De Hallen Haarlem he has made an extensive new installation entitled Ourhouse.

In Ourhouse Nathaniel Mellors combines sculptural elements with narrative video. In the video series a wealthy European family are unexpectedly confronted with a mysterious manifestation, 'the Object’, which suddenly appears in the living room of their country home. This figure seems to have a profound effect on the conduct of the characters. At night it eats pages from ideological texts, which it subsequently spits out again. Owing to this, the father figure 'Daddy’ changes radically from an elitist with liberal economic convictions to someone who goes in search of collectivist ideals by mingling with the workers, clothed as a 'working class hero’. The changes in the characters’ personalities give rise to grotesque and humorous scenes, bringing both Samuel Beckett and Monty Python to mind. In Ourhouse the artist handles subjects such as religion, ideology and power in an absurdist and theatrical manner.

Mellors represents the two central figures in the videos, 'Daddy’ and 'the Object’, through two animatronic sculptures in the exhibition. These are lifelike latex casts of faces which are brought to life by means of electronics and software: The Object as a book-eating presence, and the twin sculpture Hippy Dialectics as the representation of Daddy’s character development.
Among the important sources of inspiration for the scenes in Ourhouse are the production techniques and script writing in TV drama, soaps and comedy. Mellors uses language as a means to tell a story to his viewers, but also to produce confusion and alienation. With a succession of plays on words and fragmented, experimental dialogues he reveals how language can create a world all by itself, and at the same time falls short in facilitating human communication. The manipulative qualities of language, and the relation between words and reality are recurrent themes in Mellors’ work.

From 5 November through 19 December Onomatopee presents Mellors’ work in its project space. This exhibition is organised in collaboration with De Hallen Haarlem. Further information: http://www.onomatopee.net.

Ourhouse was made possible by generous financial support from the Dutch Film Fund and the Netherlands Foundation for Visual Arts, Design and Architecture.