Beyond the Dust. Artists' Documents Today. An European exhibition project presenting 12 artists who are starting to emerge on the international scene. It will take place from September 2010 to January 2011 at venues in the Netherlands, Italy and France. Three separate shows provides the artists with a theoretical hypothesis on the use and manipulation of forms, images and texts, highlighting both their formal implications and their philosophical, political and social content. Contemporary 'Marinus Boezem: A volo d'uccello'. The project is divided into three parts including typical themes of Boezem's such as flight and cathedrals, and blend the poetry of St Francis of Assisi with contemporary art. During the opening day at 3 p.m. ceremonial placement of a work by Francesco Arena in the floor of the Podio del Mondo per l'Arte by Marinus Boezem. With a performance by the artist. 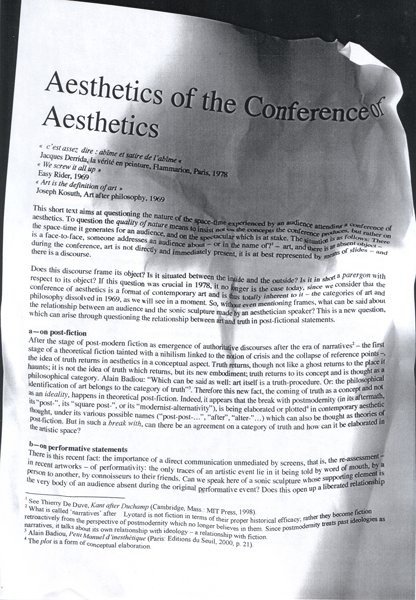 Beyond the Dust – Artists’ Documents Today

Beyond the Dust – Artists’ Documents Today is a cross-border European exhibition project presenting twelve emerging artists on the international scene. It will take place from September 2010 to January 2011 at the following institutions in the Netherlands, in Italy and in France: De Kabinetten van De Vleeshal in Middelburg, the Fabbrica del Vapore in Milan and the Fondation d’entreprise Ricard in Paris. For each venue there will be a different exhibition, in which the artists will address a specific aspect of an overall project on the authenticity or forgery of documents and archival material.

Beyond the Dust – Artists’ Documents Today provides the public with a theoretical hypothesis on the use and manipulation of forms, images and texts by artists. The objective is to highlight the formal implications of these actions and their philosophical, political and social content. The artists will not only reflect on the potential themes raised by the various components of the pieces, but will offer a broader reflection on contemporary ways of understanding memory and the notions of authenticity, fiction and forgery.

“In the Roman and Middle-Age times, the archive was defined as the «locus de quo acta public asservantur, ut faciant fidem » (where the public documents are kept to guarantee the trust of the public). It is worth to stress the role of the word « fidem » - because it allows us to underline that one of the most fascinating and important sides of the archive concept is its link to the notion of historical truth. It raises questions on how the historical notion of archive resources is inextricably linked to those of plausibility, fiction, lie as demonstrated by Carlo Ginzburg in his essays.“(Francesca di Nardo)

The Centre National des Arts Plastiques (CNAP) supports as “commande publique” the production of the catalogue designed by Roma Publications, as well as the exhibition’s archive: the artist’s book by Richard Sympson.

Nearly ten years since last working with Marinus Boezem, De Vleeshal now presents a new project by the same artist. Entitled A volo d’uccello (A bird’s-eye view), it is divided into three parts: an edition, an exhibition in De Vleeshal and a multimedia installation. The three sections of the work include typical themes of Boezem’s such as flight and cathedrals, and blend the poetry of St Francis of Assisi with contemporary art.

Boezem’s work often creates links between architecture and nature, history and geography, time and space: dichotomies whose solution is sought in synthesis between symbol and object. Recurring elements in his work are the ground plans of cathedrals as geometric designs in combination with natural elements. One well-known example is De groene kathedraal (‘The green cathedral’, 1987) in the Dutch city of Almere, showing the ground plan of the Notre Dame cathedral in Reims in the form of poplars (Populus nigra italica).

For A volo d’uccello (A bird’s-eye view) the artist has reproduced the ground plan of the Basilica of St Francis of Assisi in birdseed. In the space of a few weeks it will be eaten by birds, so that the architecture will, so to speak, be carried off towards the light. As in Almere, the work symbolises humanity’s search for spirituality. Just as the soaring trees are natural counterparts to the vertical dynamics of Gothic architecture, A volo d’uccello (A bird’s-eye view) is a reference to St Francis of Assisi’s ideas, with birds as a link between heaven and earth. The perfect Gothic geometry corresponds to the cycles of nature and the aerial dynamics of birds.

Boezem uses cathedrals as metaphors for the mathematical and engineering perfection of architecture, as well as the mysteriousness of the modus operandi applied in the design of such buildings. The dialogue with nature shows that perfection is an intrinsic part of the natural world. This combination of Gothic geometry with the more irregular flow of nature is the leitmotiv in many of the artist’s projects.

The three parts of the project represent three different ways of viewing it. The edition. The work in the public/private space is located on the roof of the artist’s studio and can best be appreciated by the public via a webcam that will broadcast the various stages of the process live. The third and final stage is an exhibition that again presents the work on the roof of Boezem’s studio, only this time in De Vleeshal. The exhibition will revolve around the creation of the shape of the basilica and its destruction by birds: a theme to which the artist has returned more than once over the past thirty years within this Gothic space.

Parola : 17.09.2010, 3 p.m.
Damplein, Middelburg
Ceremonial placement of a work of art by Francesco Arena (It) in the floor of the Podio del Mondo per l’Arte by Marinus Boezem. With a performance by the artist.