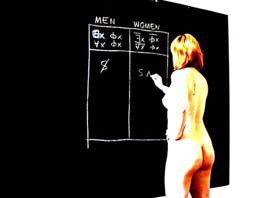 Montehermoso is pleased to present the first solo exhibition in Spain of the work by the artist Susan Hiller, one of the most important figures in British conceptual art. Her artworks, writing, lectures and publications have made her a crucial reference point for new generations of artists.

"What I See" the title of the exhibition, and of one of the pieces included in the exhibition, encompasses different stages in the career of this artist, who began her professional production in the early 1970s, when she moved from the United States to London. The show includes works that examine recurring issues in her work, such as the analysis of hegemonic forms of representation, the criticism of the objectivity of science, and the redefinition of art as a discipline for knowledge.

Hiller's artworks make reference to telepathy, spiritualism, meditation, automatic writing and hypnosis, as well as the use and—sometimes ironic—re-appropriation of psychoanalysis, feminism, cinematographic language, museography, and archiving and cataloguing techniques. This approach offers new systems for the relationship between apparently unrelated, contradictory and even opposing spaces. The artist's works highlight the ideologies operating in indexing processes in the fields of art and science, applied, in the case of her Addenda series (1976-1982), to seaside postcards from the United Kingdom or in the case of The Last Silent Movie (2007) to languages undergoing a process of extinction.

Through the recovery and use of ruled-out and rejected elements, Hiller undertakes a systematic confrontation with the logic of exclusion, which is inherent to rational processes. Through an approach that combines seduction and rigour, the artist examines the cultural artefacts that make up "the visible world". Hiller uses a world full of traces and signs to build alternative or "other" alphabets, questioning a society which rejects the unconscious, and whose underlying ghosts and fears remain hidden.

Susan Hiller (Tallahassee, Florida, 1940) has recently exhibited her work at prestigious museums and art centres, such as Index (Stockholm), the Museo Serralves (Oporto) and the Kunsthalle Basel. Her work has also been on show at the 5th Berlin Biennial, and at the exhibition "WACK! Art and the Feminist Revolution" at the Los Angeles MOCA. In February 2011 Tate Britain will present a major Susan Hiller retrospective.

On the occasion of this exhibition, Montehermoso will host a conversation between Susan Hiller and Guy Brett.

Social norms and codes indicate the established and approved way of doing things, regulate behaviour and act as an informal system of social control. Norms evolve through time and vary between religions, cultures and societies, although certain fundamental values have been considered constant throughout the history of mankind. And yet, the paradox is that these values have continuously been overruled in the name of what is claimed to be common universal principles such as freedom, equality, justice and democracy.

The subject matter of the exhibition "Monkey See Monkey Do" revolves around the complex mechanisms that cause a discrepancy between how we think and how we act and engage with issues embedded in the realm of ethics and everyday dilemmas. A central question that is raised throughout the exhibition is whether and to which extent we have a choice, or if we are in a constant unreflecting status quo of "monkey see, monkey do"—an expression that refers to the act of imitation without an actual understanding or questioning of the reason behind the action.

"Monkey See Monkey Do" develops like a trail of thought between the art works that jointly, and in conversation with each other, unfold a narrative that explores the various ways in which we respond to the rules, beliefs and attitudes that affect and regulate our lives. Political ideas, scientific goals, religious convictions, legal systems, education and family are some examples of social institutions that can easily turn into tools of oppression when understood as a homogenous entity, instead of a manifold set of values.

Even though social institutions are powerful constructions, they still have the ability as such to be revalued and modified in order to represent a plurality of views that embrace the notion of freedom of choice—a freedom which is not to be understood as merely an optional choice between two alternatives. And so far so good, but at the end of the day are we capable of grasping the challenge inherent in the idea of freedom of choice? And if so, the question that follows is if we have the courage to confront and reassess our values and beliefs, no matter the personal cost this might entail.

Passwords aims to show and document the many lines of criticism and artistic creation based on feminist viewpoints that have been developed in an audiovisual format since the 1960s. The project's goal is to reveal, question and refute the sexist mechanisms and undercurrent present in mainstream artistic iconography concerning women and femininity.

The works presented in this cycle attempt to analyse and reveal the influence of gender mandates in the construction of identities. Some speak clearly of the weight of the family and the media; others, in a more subtle way, try to reflect the impositions which we ourselves often transmit without realising it. In all cases, the videos show situations which, because they are less visible than the marginal and stereotypical realms, often go unnoticed, despite being essential to the production of pre-determined social roles.

Centro Cultural Montehermoso Kulturunea
Fray Zacarias Martinez, 2 - 01001 Vitoria-Gasteiz, Spain
Opening hours
From Tuesday to Sunday, from 11 to 14 and from 17 to 21.
Closed on Monday.