American Idol. Works from 1995 to 2010. Lou's unique use of beading has continuously intrigued her audience since her first presentation of Kitchen in 1996, covering a 16 square meter kitchen, every appliance and piece of furniture with painstakingly applied glass coloured beads. Her subject matter has changed over the years from the domestic, with Kitchen and Backyard, to darker and more political material as seen in Security Fence, Cell and Barricade. 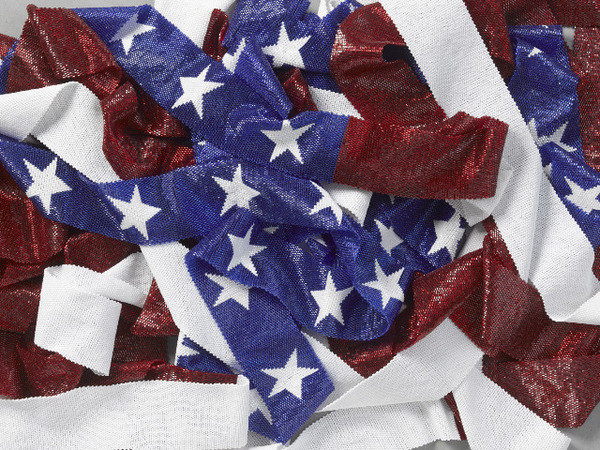 “The zillions of beads I used to create American Presidents symbolize grand campaign promises of a sparkling future for America and the fulfilment of the American Dream.” Liza Lou

Galerie Thaddaeus Ropac is pleased to announce its upcoming exhibition of works by American artist Liza Lou, titled American Idol. For her second solo show at the gallery, Lou will present the installation of American Presidents (1995-2000) as well as new pieces that stem from this serial project and a group of ethereal drawings on the first floor of the gallery.

Liza Lou’s unique use of beading has continuously intrigued her audience since her first presentation of Kitchen in 1996, covering a 16 square meter kitchen, every appliance and piece of furniture with painstakingly applied glass coloured beads. Her subject matter has changed over the years from the domestic, with Kitchen (1991-95) and Backyard (1995-99), to darker and more political material as seen in Security Fence (2005), Cell (2004-06) and Barricade (2007-08). Throughout her career the contrast created between the beads, with their connotations of frivolity, colour and beauty, and the subjects that Lou decides to portray, from the mundane to the controversial, remains thought provoking.

Lou started to work on American Presidents in 1995, during Bill Clinton’s presidency. It began as an ongoing project of meticulously rendered portraits of every US President in beads, and came to an end in November 2000, the moment just before the Supreme Court declared George W. Bush President. The piece emphasises the special and imprecise nature of the American electoral system. This work was exhibited at the Smithsonian Museum’s Renwick Gallery in Washington DC during November 2000, the most eventful and unforgettable month in recent American electoral history. As the presidential selection was undecided for several weeks, Liza Lou ends the installation with a blank portrait, set against the wall on the floor, to represent that suspended moment in history when the United States was without a President.

The 43 portraits are depicted in grey and silver beads, evoking the history of engravings and traditional black and white portraiture in which each president is made to look his best. As it is usually the image of the man not the man himself that is voted into power; Lou merely accentuates the idea of face value through her work. These portraits also reference the history of American Presidents in popular culture, as seen in the number of stamps, buttons and kitsch memorabilia that can be found. Furthermore, Lou points out, “...it is humorous to see men in beads. Herbert Hoover is not someone you associate with glitter.” This historical project includes other ceremonial objects that reflect luxury of power, such as the chandelier and the 19th Century table with a cigar sitting in its drawer.

Alongside the American Presidents installation, a portrait of President Barak Obama hangs next to a blue monochrome American flag, standing on its own, announcing a schism, a new beginning. Pursuing the representation of the American flag in unconventional ways, Lou will display the stars and stripes reduced to a 7 cm wide ribbon that is 60 meters long. Based upon the proportions of the official American flag, Ribbon (2010) is rendered as a single woven strip with 52 stars and red and white stripes. It will hang from the wall, cascading to the floor in a pool of red, white and blue glass beads.

In the Drawings Space on the first floor, we will present a group of recent drawings, which reflect Lou’s interest in accumulation and time-consuming process, showing small dots or cells that bundle and repeat themselves across the paper’s surface. “Making cellular clusters, thinking about the material as cells—I guess that’s the fundamental interest, the accretion of material over time,” Lou explains.

On the occasion of this exhibition we will publish a fully illustrated catalogue with essays by Diedrich Diedrichsen and Christoph Doswald.

Liza Lou was born in New York in 1969 and was brought up in Minnesota. She now lives and works between Los Angeles and Durban, South Africa, and has exhibited internationally, including the Fondation Cartier, Paris; Biennale de Lyon d’art Contemporain, Lyon; Taipei Biennale, Taiwan; the Victoria and Albert Museum, London; Boijmans Museum, Rotterdam; Museum of Contemporary Art, Helsinki; Los Angeles County Museum of Art, The New Museum, New York and The Metropolitan Museum of Art, New York.
Lou has had numerous solo shows including at the Museum Kunstpalast, Düsseldorf; Henie Onstad Kunstsenter, Oslo and Fondacio Joan Miró, Barcelona. In 2002, she was a recipient of a MacArthur Foundation Fellowship.

Opening in the presence of the artist on Thursday, October 21st from 6:30pm to 8:30pm