Collective and personal memories, film stills, images from the Internet and art historical references are cut out and fused to make up the fabric of his paintings. The gallery presents a group of 10 new works in which the 'self' takes center stage. 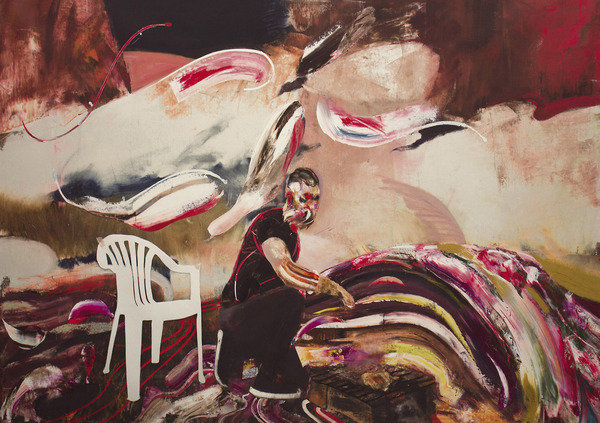 Born in Baia Mare Romania in 1977 and now living and working in Berlin, Adrian Ghenie is currently representing Romania in the 56th Venice Biennale.

Brought up in post-Ceausescu Romania, Adrian Ghenie’s work often dwells on the darker moments of post-war European history and the personalities whose actions have defined its course. Collective and personal memories, film stills, images culled from the Internet and art historical references are cut out and fused to make up the fabric of his paintings. Adrian Ghenie speaks of “painting the texture of history” and it is his fascination in recapturing these lost textures that give rise to the artist’s extraordinarily expressive use of paint.

The gallery in the Marais will present a group of ten new oil paintings in which the “self” takes center stage. This subject has been a central theme for the artist since 2010 culminating in just over twenty distinct “Self-Portraits”. Comprising of either pure investigations of his own self-image or hybrids such a Self-Portrait as Vincent Van Gogh (2014), Self-Portrait as Charles Darwin (2014) and Self-Portrait as a Monkey (2014).

Ghenie talks of his fascination with the way Picasso and Francis Bacon, in particular, deconstructed the human face and how he sees the face as a landscape made up of a series of undulating surfaces, protrusions and a myriad of different textures.

The flesh-like landscape of The Picnic (2015) echoes the facture and movement of the beard in his most recent Self-Portrait as Vincent Van Gogh (2015). Adrian Ghenie zooms in to concentrate on the landscape of the face. On the cusp of representation and abstraction, the face is often dissolved through the artists’ signature paint-application style but also through his theatrical set ups – through disguise and identification. The works feature inspirational heroes but also counterfigures associated with fear and mass suffering (Hitler, Stalin, Josef Mengele and Ceauşescu).

Adrian Ghenie’s montage of the self through key figures is notably expressed through the use of collage; a favoured medium of the artist, as its technique reflects the artist’s “compositionist” gesture. French Philosopher of science and art Bruno Latour, chooses the word “composition” as an alternative to critique and “compositionism” as an alternative to modernism. Through his layered paintings Adrian Ghenie questions the construction of history and the self in the aftermath of modernism and genocide; perhaps reflecting Bruno Latour’s thought that “once the two organizing principles of nature and society are gone, one of the remaining solutions is to ‘compose’ the common world”.

A book will be published to accompany this exhibition with an essay by art historian James Hall.