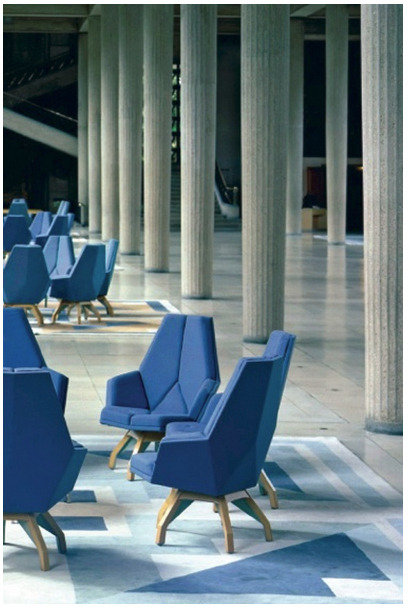 “I was aiming to show just how far we could make modernity go.”

Paulin, Paulin, Paulin, the firm founded by Pierre Paulin’s family in 2008, works to promote his work. Paulin, Paulin, Paulin produces limited editions of his designs that never got beyond prototype stage, or that were made as an edition of one for special commissions, or that were never produced. They collaborate with the finest craftsmen and are backed by the expertise of Michel Chalard, Paulin’s right-hand man and technical adviser.

The official names of Pierre Paulin’s creations evoke the inventory or industrial models numbers (F560, F437, F582, F577, etc.), but we are more familiar with the descriptive titles of these pieces among others – Mushroom (1960), Orange Slice (1960), Ribbon (1966), Tongue (1967) – that institution such as MoMA New York acquired in 1967. These iconic objects by the most famous French designer of his day heralded the new society being shaped by the massive cultural, economic and technological changes of the early 1960s. Paulin’s furniture fitted the forms of the human body as it freed itself of social constraints.

His rigorous research into new materials (elasticated fabrics and polyurethane foam, for example), combined with innovative construction methods placing wellbeing at the heart of the process, authorised all kinds of arrangements and made space malleable. Paulin’s radical artistic stance conjoined formal modularity with sensuous functionalism. His travels in Scandinavia (1951) and Japan (1963) made a lasting impact on his work and aesthetic approach, which he also applied to the interior commissioned for the private apartments of Georges Pompidou at the presidential palace, the Elysée, in 1971 (an ensemble that was even more audacious than the “modern, but classical” pieces commissioned by François Mitterrand in 1983). The body must be one with its surroundings, or rather, the opposite: the floor, walls and ceiling were conceived as a harmonious whole. The tendency to create a low centre of gravity echoed the interiors of Japanese houses and nomads’ tents.

The modular undulations of La Déclive (1966), a serial succession of curving foam seating bars interlinking on an articulated metal frame, give it a weightless quality. To date, there existed only two prototypes of this piece, one of which entered the collection of the Musée National d’Art Moderne/Centre de Création Industrielle in 2003. Atypical, half sculpture and half furniture, La Déclive’s voluptuous silhouette contrasts with its precisely crafted and captures its creator’s quest: “I am what you could call a para-artist. Someone somewhere between the artistic and the technical spheres. And this only works if it excels in both.”

In Bertrand Lavier’s “Paulin/Planokind” the Tongue chair is placed on top of a drawings cabinet, and thereby raised to ready-made status, in a mischievous twist on the idea of cultural heritage. The painting “Walt Disney Productions no. 13” playfully creates a real artwork from the cartoon world of the Mickey Mouse Museum.
The themes in the paintings of Mike Bouchet and KAWS are similarly inspired by Pop Art and the consumer society in which it was rooted.

Dune and the tapis-siège designed by Paulin in 1970 for a housing project conceived as a manifesto for a new art of living were commissioned by the Herman Miller company, which also produced pieces by Charles et Ray Eames, whose work Paulin had long admired. The subjacent idea was that people could combine different elements, assembling them or disconnecting them as the mood took them, and thus be the architects of their own interior. The maquette for this project, which was never produced, entered the MNAM/CCI collection in 2003. The prototypes have been displayed for the first time by Louis Vuitton and Paulin, Paulin, Paulin, during Design Miami 2014.

The work by John de Andrea, a hyperrealist figure of a languorous naked woman, sitting on a Dune, highlights its sensuality, as does another figure, lying in the middle of a carpet-chair which is half origami and half oriental carpet, as does the one reclining casually on “Jardin à la française” carpet.

The performance by Elmgreen & Dragset, Untitled (Home is the Place You Left), was seen, notably, at the 53rd Venice Biennale in 2009, when the artists occupied the Danish and Nordic pavilions. In one of the two houses owned by fictive collectors (that of Mr. B, who was found dead in his swimming pool), a naked young man was reading and listening to music on headphones. Here, he is seen sitting in an F444 armchair in leather and steel, seemingly oblivious to the gallery’s visitors (Thursday October 22, Friday 23, Saturday 24 from 11am to 7 pm then every Saturday from 3pm to 7pm).

Further in, the Expansion n°9 by César (1970) embodies the unctuous density of paint using organic polyurethane foam (one of Paulin’s favoured materials), here frozen in its flow.

In 1986–87 Paulin worked on a commission for the French Ministry of Culture/ Mobilier national, for the large colonnaded hall in the Palais d’Iéna built by Auguste Perret in 1939, and now the home of the Conseil Économique et Social. His “Jardin à la française” divided this immense hall into eight spaces for intimate conversation, each comprising low tables in sycamore wood (previously existing only as a drawing), flecked maple and aluminium with chairs in sycamore, aluminium and foam. The geometrical lines echo the coffered ceilings, fitting discreetly into the imposing, majestic architecture. The patterns on the carpet partially reprise the project for a stone garden in the Palais Royal, in a competition won by Daniel Buren’s columns in 1986.

Finally, the table “Cathedral” in aluminium and glass, which Paulin considered his masterpiece, combines the precision of engineering with the highly wrought curves of Gothic architecture.

The mobiles made by Xavier Veilhan is a synthesis of his aesthetic and technical experiments, bringing together diverse creative fields such as architecture design, music and cinema. These are imbued with the modernist spirit of the 20th century and certainly have much in common with Paulin’s concerns.

The works of Jesús Rafael Soto and Tara Donovan explore the principle of modularity through rigorous, optical and vibratory compositions, our perception of which varies with our point of view. In the same way, the pieces by Monir Shahroudy Farmanfarmaian, Laurent Grasso and Heinz Mack capture and reflect atmospheric light and the fragmented bodies of visitors.
They invite to an exhibition experience that is multidimensional, polysensorial and temporal.