YouTube Play. A Biennial of Creative Video aims to discover and showcase the most exceptional talent working in the ever-expanding realm of online video. Today, up to 20 videos selected by the jury of experts from the short-listed will be presented on youtube.com/play and at a celebration at the Guggenheim Museum in New York, with simultaneous presentations at the Guggenheim museums in Berlin, Bilbao, and Venice. 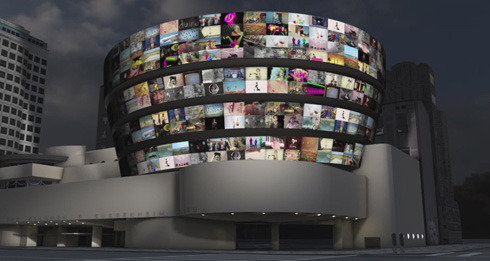 YouTube Play. A Biennial of Creative Video aims to discover and showcase the most exceptional talent working in the ever-expanding realm of online video. Developed by YouTube and the Guggenheim Museum in collaboration with HP, YouTube Play hopes to attract innovative, original, and surprising videos from around the world, regardless of genre, technique, background, or budget. This global online initiative is not a search for what’s “now,” but a search for what’s next. Visit youtube.com/play to learn more and to view this year's shortlist.

About YouTube Play
In the last two decades, there has been a paradigm shift in visual culture. The moving image has been fully absorbed into critical contemporary-art practices, and now we are witnessing the power of the Internet to catalyze and disseminate new forms of digital media, including online video. With video now available for anyone to produce and watch, almost anytime and anywhere—be it on cell phones, digital cameras, computers, or tablets—it has become the medium of choice for many aspiring artists. YouTube Play will recognize the current effect of new technologies on creativity by showcasing exceptional talent working in the ever-expanding realm of digital media.

It is the goal of YouTube Play to reach the widest possible audience, inviting each and every individual with access to the Internet to submit a video for consideration. The end result will hopefully be the ultimate YouTube playlist: a selection of the most unique, innovative, groundbreaking video work being created and distributed online during the past two years.

The Take
Running in conjunction with YouTube Play, the Take, a blog featuring writing by experts, scholars, and artists from the worlds of film, video, and Internet culture will discuss digital content, the history of video art, and online video and its effects on art and life.

Selection Process
The submission period closed in July. View the shortlist as selected by the Guggenheim Museum.

One of today’s most prolific performance artists, Laurie Anderson is renowned as a musician, inventor, and filmmaker. Her performance practice is diverse, ranging from riveting monologues to sophisticated multimedia events that combine and harmonize visual and aural elements. At once experimental and entertaining, Anderson’s work resists categorization, as the novel-inspired performance Songs and Stories for Moby Dick (1999–2000) illustrates. The impact of Anderson’s creative work has been acknowledged by NASA, which named her its first artist-in-residence in 2004. A traveling retrospective of Anderson’s visual work, The Record of the Time: Sound in the Work of Laurie Anderson, was organized by the Musée d’Art Contemporain de Lyon in 2003. Recently Anderson released the album Homeland (her first in ten years) and premiered the new performance work Delusion at the Vancouver 2010 Cultural Olympiad.

Born and raised in Brooklyn, New York, director Darren Aronofsky won the Director’s Award at the 1998 Sundance Film Festival and an Independent Spirit Award for Best First Screenplay for his first feature, π. In 2000 Aronofsky premiered Requiem for a Dream at the Cannes International Film Festival. The film was named to more than 150 Top Ten lists, including those of the New York Times, Rolling Stone, Entertainment Weekly, and the American Film Institute. His third feature, The Fountain, a science-fiction romance that he wrote and directed, starred Hugh Jackman and Rachel Weisz. Aronofsky’s most recent film, The Wrestler, premiered in 2008 at the Venice International Film Festival, where it won the Golden Lion, making it only the third American film in history to win this prize. Among his honors, the American Film Institute has awarded Aronofsky the prestigious Franklin J. Schaffner Alumni Medal, and the Stockholm Film Festival presented him the Golden Horse Visionary Award. His next release, Black Swan, is a horror film set in the world of ballet that stars Natalie Portman and Mila Kunis, forthcoming in late fall 2010.

Scottish-born artist Douglas Gordon utilizes a variety of mediums, including installation, video, and photography, to investigate memory and time. For his landmark video 24 Hour Psycho (1993), he slowed Alfred Hitchcock’s 1960 film to last an entire day; the tension of this famous thriller was heightened by the mesmerizing, protracted action. In 2006, Gordon collaborated with artist Philippe Parreno on Zidane: A 21st Century Portrait, a film that presents the movements of French soccer star Zinedine Zidane in real time over the course of a single match to create a complex study of portraiture and mediated spectacle. Exhibited globally, Gordon's work has been the subject of considerable critical attention. Gordon received the 1996 Turner Prize, the Duemila Prize for best young artist at the 1997 Venice Biennale, and the 1998 Hugo Boss Prize. In 2008 he received the Roswitha Haftmann Prize and served as an International Juror at the 65th Venice International Film Festival.

Ryan McGinley is a photographer whose work celebrates raw youth, with all its connotations of revolt, hedonism, and subversion. Subjects have ranged from fans of the musician Morrissey (in the series Irregular Regulars, 2004–07), to nude young men and women playing and living in nature (I Know Where the Summer Goes, 2007–08) or captured in intimate studio portraiture (Everybody Knows This Is Nowhere, 2010). In 2003, at the age of twenty-five, McGinley became the youngest artist to have a solo show at the Whitney Museum of American Art. McGinley has been the recipient of two important photographic prizes, the ICP Infinity Award for best young photographer from the International Center of Photography in 2007 and American Photo magazine’s Photographer of the Year award in 2003. In addition to projects in which he documents his own friends and community, McGinley has created editorial portfolios for such publications as Index, Esquire, and the New York Times Magazine, for which he has photographed athletes at the 2004 summer and 2010 winter Olympic games, 2007 Oscar nominees, and the singer M.I.A.

Artist Marilyn Minter merges high art with commercial imagery throughout her practice, which includes painting, video, and photography. Minter’s work frequently focuses on the female body, creating hyperrealistic artworks that offset sensuality with lurid colors. Her second video work, Green Pink Caviar (2009), has been screened in locations around the world, including Sunset Boulevard in Los Angeles, Times Square in New York, Madonna’s 2009 European tour, and, at present, the lobby of the Museum of Modern Art, New York. The manipulation of glamour and desire, recurrent themes for Minter, converged in her appropriation of Pamela Anderson’s iconic pin-up image in a 2007 series of photographic portraits. Minter has exhibited internationally, with notable solo shows organized by the San Francisco Museum of Modern Art (2005); Center for Contemporary Art, Cincinnati (2009); and La Conservera, Centro de Arte Contemporáneo, Murcia, Spain (2009).

World-renowned Japanese artist Takashi Murakami blurs the boundaries between East and West, past and present, in his paintings, sculptures, and videos. Influenced by such varied traditions as Japanese manga, anime, and classical nihonga painting and Western Pop art, Murakami has developed a unique practice that situates the artist at the cusp of high art and mass culture. In his work as a curator, Murakami has organized such seminal exhibitions of contemporary Japanese art and culture as Superflat (2000) and Little Boy: The Art of Japan’s Exploding Subcultures (2005). As an entrepreneur, he promotes emerging artists through his art production and management company Kaikai Kiki Co. Having exhibited widely throughout the world, Murakami is currently preparing for an exhibition at the Château de Versailles in September 2010.

Shirin Neshat is an Iranian-born artist/filmmaker living in New York. Neshat’s early photographic works, including the Unveiling (1993) and Women of Allah (1993–97) series, explored notions of gender in relation to Islamic fundamentalism and militancy. Her subsequent video works departed from overtly political content or critique in favor of more poetic imagery and narratives. Neshat recently directed her first feature-length film, Women without Men, which received the Silver Lion Award at the 66th Venice International Film Festival in 2009. Neshat has been the subject of numerous solo exhibitions at galleries and museums internationally, including the Stedelijk Museum in Amsterdam, the Serpentine Gallery in London, Hamburger Bahnhof in Berlin, the Walker Art Center in Minneapolis, and the Musee d’Art Contemporain de Montreal.

Stefan Sagmeister is one of today’s most innovative and influential graphic designers. His conception and application of graphic design goes above and beyond traditional notions of the practice, taking it to the realm of performative, conceptual, and installation-based art. Sagmeister is most widely known for his album cover artwork for bands like the Rolling Stones, Talking Heads, and Lou Reed, and for books like Mariko Mori’s Wave UFO for the Kunsthaus Bregenz, which function as sculptural objects.

Working in both feature-length and short forms, Apichatpong Weerasethakul plays with various narrative devices and nonlinear structures in his profoundly expressive, lyrical films, which are produced in his native Thailand. Exploring memory, political oppression, and spiritual quests, the works blend naturalism with stylized, dreamlike sequences. Weerasethakul’s Syndromes and a Century was the first Thai film to be selected for the Venice International Film Festival, where it premiered in 2006 at the 63rd festival. Recent screenings and exhibitions of his films and installations include Phantoms of Nabua, Wexner Center for the Arts, Columbus, Ohio; Moderne de la Ville de Paris/ARC (2009); and at Life on Mars, 55th Carnegie International, Pittsburgh (2008–09), at which he was awarded the inaugural Fine Prize. His feature films have won several prizes from the Cannes International Film Festival, including the Prix Un Certain Regard (2003), the Prix du Jury (2004), and for his most recent film, Uncle Boonmee Who Can Recall His Past Lives, the prestigious Palme d’Or (2010).