More World, artist's latest solo exhibition at Foxy Production, plays with perceptions of excess, anxiety, pleasure, and deprivation. More World combines wallpaper, drawings, prints, sculpture, and video in a charged environment of color and contrast. Nature within the city, packaging, and fast-food provide inspiration for the artist's ironic takes on the psychic underpinnings of landscapes, surfaces, and objects. 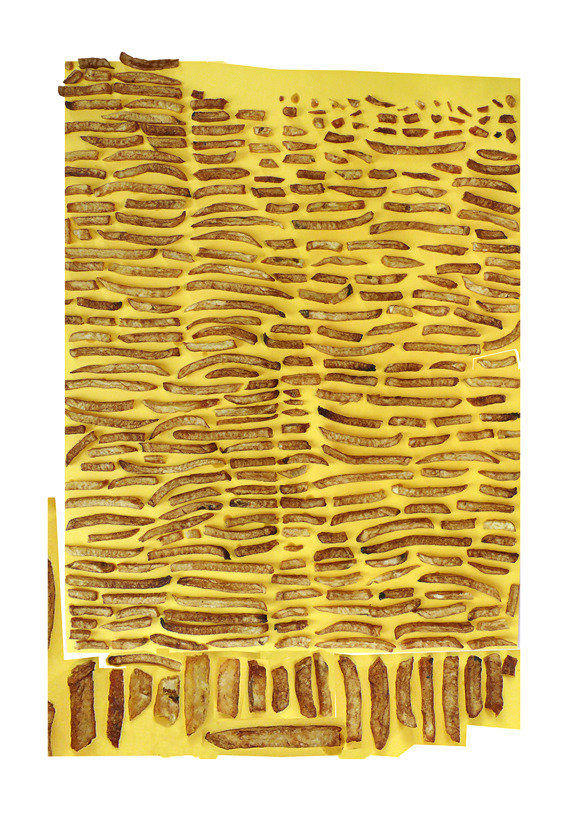 More World, ESTER PARTEGÀS' latest solo exhibition at Foxy Production, plays with perceptions of excess, anxiety, pleasure, and deprivation. More World combines wallpaper, drawings, prints, sculpture, and video in a charged environment of color and contrast. Nature within the city, packaging, and fast-food provide inspiration for the artist’s ironic takes on the psychic underpinnings of landscapes, surfaces, and objects.

Partegàs unpacks Pop, contaminating it with trash, removing its logos and references, and infusing it with a corrupted photo-realism. Private and public spheres sit uneasily together, as the artist traces the process of consumption: from the birth of desires in marketing to the final transformation of products into trash, the symbol of depletion and, perhaps, death.

The walls of the gallery are covered by the monochromatic Wallpaper (Fences) (2010) with its repeating photographic images of fencing and trees. The landscape is immediately recognizable as an abandoned urban area, common to large swathes of the post-industrial American city. For Partegàs the fence represents the division between the civilized and the wild, between order and disorder, and between the clean and the tainted; unnervingly, we cannot be sure which side of it we are on.

Studies on Mysticism (2010), a series of iridescent candy package drawings, hang before the black-and-white wallpaper, creating senses of both animation and disorientation. Using airbrush and stencils - the tools of choice of pre-digital graphic designers – Partegàs draws only the background designs, highlighting their cosmic, almost transcendental allusions, as if they were promising, with the purchase of a product, a kind of celestial reward. The works’ intense coloring amplifies merchandising’s optimistic appeal, one so often undercut later by dissatisfaction and disillusion.

Organized Fries (2007-2010), also hung directly onto the wallpaper, are digital prints of arrangements of French fries on brightly colored backgrounds. Partegàs makes the humble fry – unremarkable, almost invisible in its ubiquity – the focus of attention, the essential element within the visual systems she develops. She wittily places and classifies each fry with a formal precision reminiscent of a natural history museum exhibit.

Overcast (2010) are sculptural renderings of outdoor potted plants that have been covered in plastic bags to protect them from the winter weather. Their plastic covering is their protector from the elements as well as their oppressor – it seems to both constrict and suffocate. Cast in polyurethane, their leaves have a bright pigmentation that gives them an uncanny, almost surreal quality.

You Are Here (Lightbox) (2006-2010) is an illuminated idyllic forest scene that on closer scrutiny may not be quite what it seems: weeds sprouting in the foreground and strange marks and printing inconsistencies reveal the scene to be a photographic screen. The image is in fact of a hoarding around a Chinese building site, masking its dirt and disruption with a vision of bucolic splendor. Perception is distorted, and flatness and depth collapse into one another as differing levels of reality refract and disorient.

The silent video Ghost (2009) reflects the world through a trash-strewn puddle on a lonely industrial street. A truck rolls by, pigeons fly overhead, and an electronic advertising sign changes. Ghost distils many of the themes of More World: the odd glamour of the marginal and the discarded, the possibilities of multiple perspectives on the one subject, the trickiness of absolutes, and the experience of looking with fresh eyes upon the ordinary and everyday. As the video progresses it is clear that even the most mundane and forgotten backstreet, the so-called “non–place”, is rife with transformative activity.