Realism in Painting and Photography. Starting from the MUMOK's extensive collection of 40 works, the exhibition places the museum's own holdings in a context of realisms and investigates the concepts behind a painting genre that is determined by the subject matter of the city, streets, automobiles and the American way of life. Time and again the Photorealists emphasised the importance of Pop Art some of which is shown at the start of the exhibition before the presentation of the main protagonists such as Richard Estes, Ralph Goings or Don Eddy. 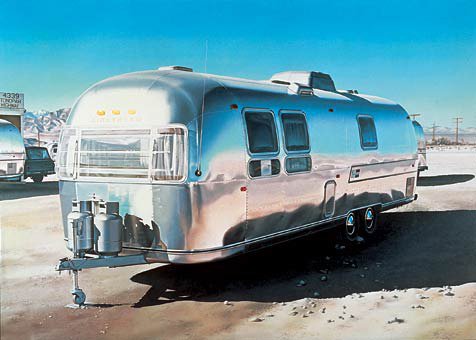 Under the title “Hyper Real” the MUMOK will examine the passion for the real in painting and photography from the late 1960s to this day. Among the around 250 works, many of the most important Photorealist paintings will be shown in a nostalgic and amusing look at this important chapter in international art history.

The Photorealists — Chroniclers of the American Way of Life
At the end of the 1960s, a group of American artists attracted a considerable amount of attention with their realistic paintings based in meticulous detail on photographs. They became chroniclers of the American way of life during the late 1960s and early 1970s, capturing images of everyday life in still lifes, portraits, interiors and cityscapes. Shining chrome road cruisers, bright and colorful shop windows and scenes from suburban life were among their characteristic themes. These often unspectacular snapshots, amateur photographs and newspaper clippings were transformed into monumental pictures — often with the help of slide projectors. Details such as reflections and other light or shadow effects were accentuated.

Although specifically in tune with America, the pictures were also self-consciously a part of the European history of painting, with their attention to traditional painterliness continuing the tradition of figurative modernism. Deception, illusionism, and other controversial aspects of representation came to be discussed with respect to painting and its history.

Pop Art as Inspiration and Point of Departure
Along with their contemporaries in Pop Art, the Photorealists looked more openly at the world of popular culture and merchandise, working consciously in contrast to the extreme subjectivity and emotionalism of Abstract Expressionism. Many of the Photorealists explicitly referred to Pop Art as an inspiration and a point of departure. In the exhibition, prominent works by Roy Lichtenstein, James Rosenquist, Andy Warhol and Tom Wesselmann are presented in contrast to works by the protagonists of Hyperrealism such as Richard Estes, Ralph Goings, Robert Bechtle, Malcolm Morley, Don Eddy, Robert Cottingham, Richard McLean and Chuck Close. To complement this, photography from the same period between the 1960s and 1970s by Saul Leiter, Stephen Shore, Joel Meyerowitz and William Eggleston will be shown. At the same time, American positions will be contrasted to European positions with works by Gerhard Richter, Domenico Gnoli, Jean Olivier Hucleux or Richard Hamilton.

The Contrast between Painting and Photography
The exhibition looks into the history of the interrelationship of painting and photography up into the present, presenting numerous important international positions. With Jeff Wall as the point of departure, the show then continues to some of the big names of contemporary German photography: Candida Höfer, Andreas Gursky, Thomas Ruff and Thomas Struth. Their presence opens the exhibition to other positions within the broad field of contemporary realism in art.

Peter and Irene Ludwig Collection
The artists known as Photorealists, Hyperrealists or New Realists had their first big breakthrough at the documenta V in 1972. Already at that time, the collectors Peter and Irene Ludwig played a crucial role lending important works from their large collection of Photorealist works. The exhibition “Hyper Real” will now present the entirety of their collection. Brought together from five Ludwig museums in Vienna, Aachen, Cologne, Koblenz and Budapest, the examples shown represent the most important works of Photorealism. Spread throughout three floors, the exhibition presents a comprehensive view into this chapter in the history of painting, tracing its influence to the present, and showing its relationship to the medium of photography. Catalogue A comprehensive catalogue will be published accompanying the exhibition with essays by Susanne Neuburger, Monika Faber and Benedikt Ledebur and an interview between Brigitte Franzen and Jean-Christophe Ammann. The exhibition “Hyper Real” was made in cooperation with the Ludwig Forum für Internationale Kunst, Aachen and the Ludwig Múzeum — Museum of Contemporary Art, Budapest. After Vienna, it will be shown in Aachen (13/3 — 19/6/2011) and Budapest (28/7 — 23/10/2011). With the support of the German Ludwig Stiftung. Special thanks to the main sponsor of the exhibition: Ruefa, the MUMOK partners: Air France, Art Photography Fund, Dorotheum, UNIQA; and the media partners: Der Standard, Compliment, Wien live, eyes on, Infoscreen und Club Ö1.