Notes about Emancipation. Group show with Carolina Caycedo, Carla Fernandez, Adriana Lara and Judi Werthe. Echoing the commemoration of the historical cries of independence of a series of Latin American countries, the MUSAC's Laboratorio 987 presents a group of artists who have produced a body of work focusing on this issue. Curated by Maria Ines Rodriguez. Also on show a site-specific project focusing on contemporary art magazine Pulgar, published by Venezuelan artist and curator Luis Romero since 1999. 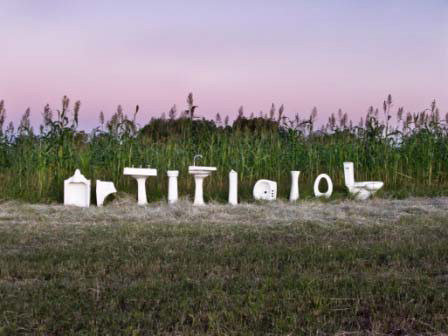 On October 23rd, as part of its 5th anniversary exhibition programme and in its Laboratorio 987 exhibition space, the MUSAC will be presenting the project CGEM: Notes about Emancipation, a group show by the artists Carolina Caycedo (London, UK, 1978), Carla Fernández (Saltillo, Coah, Mexico, 1973), Adriana Lara (Mexico City, Mexico, 1978) and Judi Werthein (Buenos Aires, Argentina, 1973). From this premise the four artists will exhibit in the MUSAC’s Laboratorio 987 a selection of pieces collaboratively produced with different associations and local groups. This project stems from the context of the show Models Kits. Thinking Latin America from MUSAC’s Collection, on the occasion of which the entire programme of exhibitions and activities from June to December 2010 at the Museo de Arte Contemporáneo de Castilla y León will be based on Latin America.

Emancipation, in the broadest sense of the term, refers to any action that allows a person or a group of people to attain a state of autonomy by succeeding in freeing themselves from some authority or power to which they are subjected. Echoing the commemoration of the historical cries of independence of a series of Latin American countries, the MUSAC’s Laboratorio 987 presents a group of artists who have produced a body of work focusing on this issue.

Over the past two hundred years great changes have shaken the Latin American continent and the whole world. The transformations on political, social, economic and cultural levels, and their repercussions in the public sphere, have been topics of analysis on the part of experts, yet they also make for recurring topics in contemporary art. In this sense, artists act as witnesses of their time, as passeurs, critics, or analysts, expressing themselves through their work and questioning the cultural construction of history. The exhibition CGEM: Notes about Emancipation, conceived as a global project generated by the four guest artists, will include a series of activities that will activate the space and allow public participation.

About the artists
Carolina Caycedo (Londres, UK, 1978)
She lives and works in San Juan, Puerto Rico and her work addresses the effects of worldwide capitalism, with a practice rooted in the processes of communication, movement and exchange. Her varied projects, which range from street actions and mobile markets to public demonstrations, germinate into dialogues with communities outside the art world, and her works always refer to informal culture and economy. For Caycedo, the place of artistic experience extends beyond the studio or exhibition space, filtering into the broader context in which the artist lives and moves. The result is work that consists in creating opportunities for cooperation and dialogue among a wide range of individuals and communities, rather than objects of passive aesthetic contemplation. Caycedo constantly analyzes the borders between producers and consumers, professionals and amateurs, benefits and disadvantages, and art and society.

Adriana Lara (Mexico, 1978)
She lives and works in Mexico City and creates individual and group projects that are less based on the production of objects than on a conceptual approach to artistic production and the exhibition space. Lara focuses on artistic models, presenting problems or situations for the spectator’s reflection. Adriana Lara is co-founder of Perros Negros, an art production office that proposes new platforms for discourse and production, for the purpose of expanding creative projects and giving them visibility. Among other projects of Perros Negros, she is publisher of Pazmaker, a fanzine featuring articles by different authors. She has had solo shows at Gaga Arte Contemporaneo, Mexico City (2008); Galería Comercial, San Juan, Puerto Rico (2007); and Air de Paris, Paris, France (2007). Her work has been included in group shows such as San Juan Trienal Poligráfica, Instituto de Cultura Puertorriqueña, San Juan, Puerto Rico (2009); Galerie Isabella Bortolozzi, Berlin, Germany (2009); The Generational: Younger than Jesus, New Museum, New York (2009); and La Mamain et la Putain, Air de Paris, Paris, France (2006).

Judi Werthein(Buenos Aires, Argentina, 1973)
She lives and works in New York. Through interdisciplinary work Werthein focuses her artistic investigation on the process of formation/construction of the individual and collective subject, with a particular interest in the interpretation of identities as flexible and untranslatable rather than static or fixed. Her work enables her to transmit the experience of outsiders through the language of mainstream culture, presenting the stereotypes of the Western capitalist conception from a different perspective. She has had solo shows at Art in General, New York, NY (2007); the Chianti Foundation, Marfa, Texas (2003); and the Bronx Museum, Bronx, NY (2002). Her work has been included in group shows such as Manifesta 7, Bolzano, Italy (2008); Beginning with a Bang: From Confrontation to Intimacy, Americas Society, New York, NY (2007);The irresistible Force, Tate Modern, London (2007); and In-Site San Diego, CA/Tijuana, Mexico (2005).

Carla Fernández (Saltillo, Coah, Mexico, 1973)
She lives and works in Mexico City. She is a fashion designer, founder of “Taller Flora”, and winner of the International Young Fashion Entrepreneur 2008 award granted by the British Council during London Fashion Week. She is design consultant for the directorate of popular and native cultures of Conaculta in different communities of Mexico. Flora workshop operates as a travelling laboratory that is partly carried out in native communities and partly in Mexico City. The project seeks to create a sustainable option allowing the incorporation of craft processes in an effort to involve them in a contemporary scene without falling into folklorism. This pedagogy also contributes to establish links with different cooperatives and strengthen networks that function with principles of fair trade and materials that have positive ecological impacts.

On 23 October 2010 MUSAC, the Museo de Arte Contemporáneo de Castilla y León, will unveil a site-specific project focusing on contemporary art magazine Pulgar, published by Venezuelan artist and curator Luís Romero since 1999. Alongside this initiative, MUSAC and the Serralves Foundation will jointly publish a special issue of the magazine highlighting art publications and editorial projects produced in Latin America. The exhibition is scheduled within the framework of Model Kits. Thinking Latin America from the MUSAC Collection, on occasion of which MUSAC's entire range of exhibitions and parallel activities will revolve around Latin America between June and December 2010.

On Pulgar
Pulgar is a free magazine published independently in Caracas (Venezuela) and supported by the Prince Claus Fund (Holland). The magazine, edited since 1999 by artist and curator Luís Romero (Venezuela, 1967) defines itself as an 'occasional publication'. This term is a key factor in understanding the magazine's founding concept: a tool for alternative creative dissemination based on the excellence of its published materials. Not complying to a specific periodicity or a luxury status, its clearly defined visual identity responds only to the curatorial rigour demanded of each new issue.

With a track record of over 20 issues designed and produced by curators and artists from around the world, Pulgar currently attracts a faithful readership in Latin America, Asia and Europe. The magazine is circulated from hand to hand or on the web. It has also featured at a number of international art events, including special editions for the 12th edition of Documenta Kassel (Germany), the Utópolis exhibition at the Caracas National Art Gallery, the Santa Lucía Evening at Maracaibo (Venezuela) or the Medellín Encounters 2007, MDE07 (Colombia).

On the presentation of the Showcase Project and the special issue co-published by MUSAC
The site-specific project designed for MUSAC's Showcases is structured around a display reviewing the magazine's evolution from its establishment in the late 20th Century to the present. In parallel, MUSAC will co-publish, along with the Serralves Foundation (Porto) a special issue of the magazine focusing on art publications in Latin America.

The show covers Pulgar's history through a representative selection of material that has appeared on its pages. It highlights some of the regular features that have defined Pulgar's approach, such as exchanges between artists, networked productions or the highly rigorous curatorial gazes sustained throughout the magazine's successive issues.

The project's opening will include the presentation of a special issue of Pulgar co-published by MUSAC and Serralves. With a print run of 4,000 copies, this new publication shall focus on publishing practice(s) as one of the axes guiding contemporary visual creation in Latin America today. From the vantage point that Pulgar provides, an essay will delve into the growing vitality and interest of the processes and ideas, as well as the sustained creativity that underpin the sphere of publishing in Latin America through a wealth of contributions.

This special issue will feature contents provided by a range of contributors and editorial projects including Ácido Surtido (Argentina), Revista Recibo (Brazil), Revista Asterisco (Colombia), Revista Lengua (Dominican Republic) des-bordes (Mexico), or populardelujo (Colombia), amongst others, as well as leading cultural agents connected to the publishing world like Andrew Losowsky, director of Colophon (USA) or David Palacios, who heads projects such as Arte-Porcentual (Venezuela).