Shadows of the Wind. This new project by the artist builds a bridge between past and present, following the thread of two bodies of photographic work that he tackled during the eighties and 19ies. His key interests, motorbikes and portraits, are still today a source of inspiration. 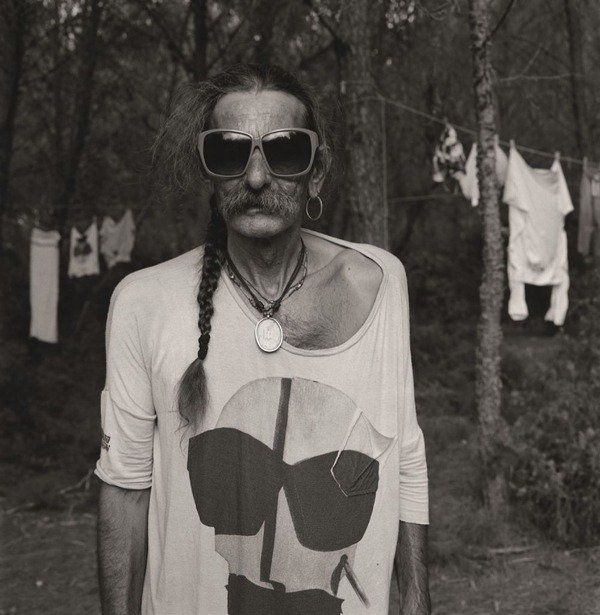 This new project by the artist builds a bridge between past and present, following the thread of two bodies of photographic work that he tackled during the eighties and nineties. Materialised in the books Bikers (1993) andLos malheridos, los bien amados, los traidores (1993), these works sum up two of his key interests, motorbikes and portraits, that are still today a source of inspiration, two ways of understanding his reality through photography.

The exhibition follows the artist"s evolution through these two themes in his life and work, tracing a photographic and self-referential journey narrated in the first person. The vintage prints we see in the display cases are a selection of images that preserve time and become objects. The video reproduction of the original books offers a close-up view of the artist"s aesthetics and vision at the time. Finally, the newly produced photographs are a selection of his latest works on the subjects that reveal the subsequent evolution of his gaze.

This show is a parable on the work of García-Alix, who appears at once essential and intimate, moving between two leitmotifs that define him as an artist and as an individual in a time frame spanning over thirty years of intense dedication to photography.

Portraiture, that extends to subjects and their context, is the core of the second part of the show. This section focuses on the discipline that best captures the photographic intention of García-Alix: his interest in others, the people who shape his world, both in photographic and in personal terms. Presences and absences, metaphors and echoes of the artist himself, who speaks to us in the first person. García-Alix invariably says that he tackles all his photographic subjects as if they were portraits, using the camera to project himself in everything he confronts, introducing it into his photographs. The result is an oeuvre of profound human, intimate and emotional significance.

When García-Alix decided to publish the book Los malheridos, los bien amados, los traidores (1993) he was already aware of the existence of a defined body of photographic work that bound a group of people together around the photographer himself. As the artist says, "there"s room for us all under this heading". Today, with the perspective given by time, we consider the book an incomparable testimony of an age difficult to define – the eighties and early nineties. The first pictures in the book date back to 1986, when García-Alix "decided" to become a professional photographer and began to produce medium-scale works and began to use a medium scale. From then on his style would be characterised by the extreme care taken over his compositions, bathed in naturalistic light, in which he challenged his subjects, blending photographic tension and compositional harmony.

His work on the actual photographic shots is complemented by his laboratory work. In the developing process García-Alix discovers an endless range of greys through which he restores the light and the moment he experienced during the taking, producing high-quality prints that are at once soft and forceful. As a bridge to this group of photographs we have a section dedicated tonewly made prints in which we discover the latest pictures taken by the artist and where, once again, he strikes up a dialogue with his immediate surroundings. The pictures of his friends, some of whom he has continued to portray over the years, reveal the passage of time and the emergence of new characters.

Thanks to this leap in time we are able to trace the evolution of the artist"s photographic language. His work in portraiture is still vital in this new section, as the most important aspect of his oeuvre is his encounter and empathy with others. We thus come across emphatic portraits, and face sitters who look back at us and challenge us. But we also observe changes in his way of taking pictures, such as alternation of medium shots and narrow close-ups, variations in camera positions ranging from the typical confrontations of his early works to new high-angle or low-angle visions, and the appearance of new and bolder lighting in compositions where chiaroscuro produces harsher portraits.

Motorbikes were the first motif photographed by García-Alix when his father gave him his first camera in 1975. A motocross race in which his brother took part became the object of his first roll of film, which would include several snapshots of great compositional value. From that moment on García-Alix would be inextricably linked to the two machines, cameras and motorbikes, through which he channels his emotions and which appear at the various crossroads in his oeuvre.

As we see in the show, his photographs on the subject reveal a well-defined aesthetics that evolves in accordance with the times. In the seventies and eighties, motorbikes were a symbol of rebelliousness influenced by American and British culture, and this influence can be seen in the snapshots taken by García-Alix in the years in which he portrayed his friends and made his first self-portraits.

In the late eighties the first motorbike clubs opened in Spain, following the trend born in the United States that spread to Europe and became extremely popular. In Madrid, García-Alix joined the Centuriones, the first important motorbike club in Spain. Bikers" gatherings, usually held in natural spaces, appear repeatedly in his photographs of this period, where a stark aesthetics forms a sharp contrast with the beauty of the surroundings and of the pictures. García-Alix also portrays his companions and their bikes in urban settings, sometimes at their front doors, against the backdrop of the streets on the outskirts of Madrid. In 1994 the artist took his passion for motorbikes one step furtherand created a competition team, Pura Vida, which takes its name from the slogan of the group he formed when he published the review El Canto de la Tripulación (1988-98), another collective dream that developed during the same decade.

This entire adventure can be traced in the show through vintage prints that reveal the beauty and extreme care with which the artistportrayed a life tied to motorbikes, forming one of the most important sections within his recurrent themes. The exhibition also displays the photo-book edition of this work, Bikers (1993), devised and edited by García-Alix himself, who is also the author of the accompanying essay.

In dialogue with this first part of his work and always in connection with the motorbike theme, we have the chance to discover García-Alix"s new photographic series. In 2012 he took a different approach which renewed his photographic discourse, a formal approach that reveals a more abstract and allegorical use of images, exploring their limits. He describes it as "a metaphor on the motorbike that allows us to recognise it even without seeing it". Its position in these new shots is risky, sometimes weird, a distorted shadow, a misshapen posture isolated in stark surroundings, bereft of references.