A platform for performances, screenings, concerts, philosophical meditations, conversations and other events throughout the three-month exhibition. Over 20 artists participate video, audio, photographs, posters or other related ephemera that contextualize the time-based events. 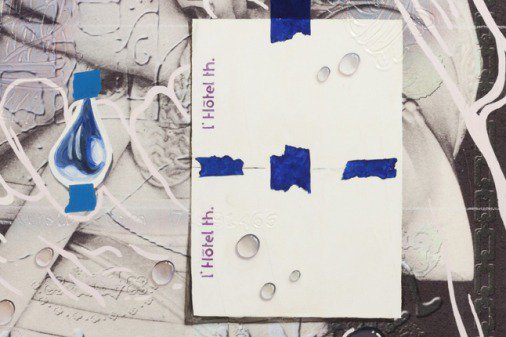 The Gallery at REDCAT becomes a platform for performances, screenings, concerts, philosophical meditations, conversations and other events throughout the three-month exhibition Hotel Theory, which explores the possibilities of theory as an art form.

Over twenty artists participate with performances or performance documentation and video, audio, photographs, posters or other related ephemera that contextualize the time-based events. Borrowing its title from Wayne Koestenbaum’s blissfully confusing book of the same name, the exhibition and series of events features a wide range of artistic disciplines, practices and points of departure.

With new work by emerging artists, and seminal works by influential, established artists, Hotel Theory suggests a historical overview — however limited—of artists and practices that question how art spaces contribute to theoretical debates.

Hotel Theory is curated by Sohrab Mohebbi in collaboration with Ruth Estévez.

Jackson Pollock Bar creates what they call “theory installations” that refer to discursive events such as lectures, interviews, panel discussions, and conferences. The group presents two performances: Wayne Koestenbaum in Conversation with Bruce Hainley, a theory installation by Jackson Pollock Bar that refers to a conversation between the two authors that was published in Bidoun magazine in 2008; and Sighs Trapped by Liars, based on a new script by the British conceptual art group Art & Language.

Re: The Wittgenstein Suite is a musical and shadow performance that emerged as a collaboration between the visual artist José León Cerrillo and the musician and actress Sara Lunden. The collaboration started with a few verses extracted from Ludwig Wittgenstein’s book Remarks on Color (1950). Working with these elements, Lunden composed the lyrics of thirteen songs in harmony with Wittgenstein’s theoretical investigations of color and transparency. The collaborative performance is constructed around shadows created by Cerrillo using lamps, screens, and projectors with live music played by Lunden.

Game Piece is a collaborative project of artists Erick Beltrán and Bernardo Ortíz. Based on the language-game experiments elaborated by the German philosopher Ludwig Wittgenstein in one of his last books, Philosophical Investigations (published posthumously in 1953), this project takes the form of a game in which Beltrán and Ortiz play together as opponents. Game Piece is a ludic dialogue situated in the space between theory and practice, concept and action, but also between graphic and text, avoiding explicit conclusions and leaving its ideas open to the game’s own strategies.

Poet, critic, and artist Wayne Koestenbaum performs piano miniatures (Scriabin, Chopin, Albéniz, Fauré, Milhaud, Poulenc, and others) while incanting spontaneous Sprechstimme-style soliloquies. Koestenbaum developed these pieces over the past year, improvising words that stream in correspondence with the musical phrases in the score. He presents a selection of these songs and then will respond in the same musical manner to audience questions.

October Jr. is a faithful three-quarter-scale model of the Spring 1980 issue of the art magazine October (no. 12). All contents, images, advertisements, and articles are precisely rendered, just a little smaller. In this lecture-performance the artist and writer Steve Kado talks about his relationship with October (no. 12).

Devin Kenny is an interdisciplinary artist, writer, musician, and independent curator. Through performance, installation, and online presence, Kenny looks at how contemporary media shapes culture and identity. At REDCAT he presents a new piece that departs from his Studio Workout series, in which he uses the structure of hip-hop and loads it with art theoretical references.

H.E.N.S. presents a magical playland intervention at the Gallery at REDCAT exploding the spatiotemporal coordinates of late capitalism. Through a series of six games, children and their adult caretakers will embark on a radical playtime dérive, demystifying, deterritorializing, denaturing, decolonizing, dismantling, and destroying residual mystifications of "the art-architecture-Disneyland, psychopharmacological poopy-land of late capitalism."

In A Prayer, Snejanka Mihaylova explores the act of praying as one of the deepest models of the thinking process by reading from selected prayers from different religious traditions. The Swedish composer Lisa Holmqvist follows Mihaylova’s reading with a musical performance of a prayer by six singers and recorder players. Prior to the performance, the Gallery at REDCAT is transformed into a workshop space where Mihaylova and Holmqvist rehearse with the performers and reflect theoretically and experientially on the acoustic dimension of cognitive experience.

Legendary and uncategorizable rock band The Red Krayola was founded in 1966 in Houston. While the group’s lineup has changed over the years, the Los Angeles–based artist and composer Mayo Thompson was the band’s cofounder and has been part of it since its beginning. At REDCAT Theater, the band will perform songs from its influential 1976 album Corrected Slogans. Many songs are arranged for voice and a single instrument, with lyrics that ruminate on theories of class struggle, alienation, historical materialism, and the conditions of advanced industrial societies.
*REDCAT theater events are ticketed. Tickets can be purchased on redcat.org.

Screening: A Crime Against Art, 2007
Followed by a conversation with Anton Vidokle.
Wednesday, November 11, 7.30 pm

A Crime Against Art is a film in six chapters based on the trial staged at an art fair in Madrid in February 2007. The trial, inspired by the mock trials organized by André Breton in the 1920s and 1930s, playfully raised a number of polemical issues in the world of contemporary art, including collusion with the “new bourgeoisie,” instrumentalization of art and its institutions, and the future possibility of artistic agency. The trial begins with the assumption that a crime has been committed, yet its nature and evidence are elusive, and no victims have come forward. The testimonies and cross-examinations become an attempt by the judge to unravel the nature of the mysterious “crime against art.”

For the performance Lecture (w/o content w/choreography), Claude Wampler creates a choreographed composition, questioning the spaces of rhetoric and the relations between speaker and audience. Following an aesthetic practice developed over the course of her career, Wampler’s performance at the Gallery at REDCAT questions the physical necessity of a performer, reflected in the absence of a possible discourse and displayed through the faked public reaction.

Cally Spooner’s contribution to Hotel Theory draws on Maurizio Lazzarato’s ideas of capital as a semiotic operator, Michel Foucault’s notions of parrhesia (or truth telling), and the Stanislavski method for actors, constructing a script that outsources her own authorship to a set of performers. For this staged reading actors present delicately choreographed scenarios of excess, control, and emotionality.

This performance by Cally Spooner is commissioned and produced as part of Corpus, network for performance practice. A next iteration of this project will be presented at Playground (STUK arts centre & Museum M), Leuven, November 17-20, 2016. REDCAT is an associate partner of Corpus. www.corpus-network.org. Corpus is co-funded by the Creative Europe program of the European Union.

In 1996 at Whiskey Pete’s Hotel & Casino, Chris Kraus organized the Chance Event: “a three-day philosophy rave in the Nevada desert.” It was a convergence of the art world with philosophers, poets, and musicians in what was meant to be the Burning Man of French theory. The Gallery at REDCAT hosts a discussion with Kraus and artist Becket Flannery (who is writing a book on the Chance Event) on the occasion of Semiotext(e)’s publication of Jean Baudrillard’s lecture for Chance.

In the REDCAT Theater, Los Angeles based artist Charles Gaines fills the stage with a nine-piece orchestra and large-scale video projection to create Manifestos 2, with a musical arrangement by the composer Sean Griffin, the director of Opera Povera. Gaines devised musical translations of four influential speeches using a conceptual rules-based musical notation system. The score is based on Malcolm X’s last public speech, made in 1965 in Detroit’s Ford Auditorium; Peace, Power, Righteousness: An Indigenous Manifesto (1999) by the Canadian Mohawk scholar and activist Taiaiake Alfred; Raúl Alcaraz and Daniel Carrillo’s “Indocumentalismo Manifesto, an Emerging Socio-Political Ideological Identity” (2010); and Olympe DeGouges’s 1791 Declaration of the Rights of Woman and the Female Citizen. Manifestos 2, the second in a series of works by Gaines based on influential historical speeches, premiered at the Museum of Modern Art, New York, in 2014.
*REDCAT theater events are ticketed. Tickets can be purchased on redcat.org.

bringourownbeing:123protaganism is a performative script in three acts by Danna Vadja that deals with the duality of how ideas become attached to individuals, objects, images, and people and become disassembled in the process of circulation. The performance depicts a set of characters that include three outsiders embodied by Vajda’s scale paintings of Artforum magazines and several paintings of company letterheads, used as masks for an actor who plays the roles of multiple participants of a think tank considering how to control the public impact of ideas.

Tirdad Zolghadr
Lecture: Show-Show, a polemic addressing the relationship art has to theory, and the one theory has to art
Thursday, December 17, 7.30 pm
Zolghadr’s lecture discusses the methodological ambivalence that is prompted by an evasive language of soft dialectics and intellectualized innuendo in contemporary art. While acknowledging its productive possibilities, he contends that within the current constellation of the field, this language allows curators to abdicate responsibility vis-à-vis their colleagues, audiences, artists, and the art itself. The talk will draw on experiences of practicing and/or teaching curating in New York, Bern, Berlin, and Ramallah, and include self-critical accounts as well as occasional successes.

Pedro Reyes presents a public puppetry performance that brings to life a chapter from his saga Baby Marx. Baby Marx uses the potential of entertainment and the playfulness of the art of puppetry in order to establish an educational tool that illustrates as much as interrogates the most important ideologies of the twentieth century.

Celebrating the end of Hotel Theory, this event features some of the exhibition’s participants together with other L.A.-based artists and activists, reading from a broad range of historical and contemporary manifestos. Sidestepping a recourse to specialized discourse, this event searches for theory through the voices, bodies, and attitudes of the readers who will make up its artificial community.

The Best New Work is one of a series of performances designed to deliver classic works of art criticism to a wider audience than they generally reach, by performing them as personal monologues in the exhibition venue itself. The actors will drift through the gallery, bookstore, cafe, restrooms, and lounge area at REDCAT during opening hours, performing their essay as if on an endless loop. The attitude, delivery, volume, and mood of the performers will change depending on where in the building they find themselves, the time of day, whether or not they have an audience, and how big that audience is.
Perfomers: Laura Beckner, Jessica Ires Morris