Staedel Works of the 14th to 21st Centuries. The holdings of the Staedel Museum comprise masterpieces of European art from the late Middle Ages to the present. The temporary closure of its galleries in the course of the redevelopment measures carried out in the old building as part of the Staedel's extension and of making the new building accessible via the old building offers the unique opportunity to show the museum's familiar treasures in an entirely new context. Curated by Jochen Sander and Martin Engler. 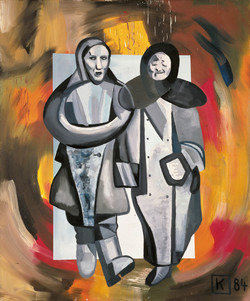 The holdings of the Städel Museum comprise masterpieces of European art from the late Middle Ages to the present. The temporary closure of its galleries in the course of the redevelopment measures carried out in the old building as part of the Städel’s extension and of making the new building accessible via the old building offers the unique opportunity to show the museum’s familiar treasures in an entirely new context. The temporary presentation of the Städel’s collection under the title “In Chronological Order. Städel Works of the 14th to 21st Centuries” in the Exhibition Building abandons the usual separation according to regions and replaces it by a strictly chronological cross-country hanging.

This approach provides a condensed art-historical timeline which grants a new, unusual and often surprising view of both familiar and still to be discovered masterpieces of the Städel and ensures that parts of its collection can also be seen during the redevelopment work. Accompanied by a chain of references to political, social, cultural and scientific key events, the presentation not only offers unconventional adjacencies, but also illustrates the development of Western painting in a unique manner. The exhibition encompassing twelve rooms comprises 300 paintings from the Städel’s holdings. The range of masterpieces spans from Jan van Eyck and Andrea Mantegna, Rembrandt, Nicolas Poussin, and Giovanni Battista Tiepolo to Max Beckmann, Pablo Picasso, Alberto Giacometti, and Gerhard Richter.

The monthly changing comprehensive program accompanying the exhibition reflects the works chosen under various thematic focal points such as technical innovations, natural sciences, history of the theater, and history of literature. The program also includes the new series “Guest Commentaries” with people from the fields of politics, business, and science who will explain their personal views of prominent works in the Städel. The exhibition is sponsored by the Techem Energy Services GmbH and supported by the City of Frankfurt am Main.

The building of large museums and the emergence of academic art history in the nineteenth century consolidated the separation of collections of paintings after regional schools. The art from the Middle Ages to the Baroque Age was categorized as Southern or Northern with the Alps providing the dividing line; in addition, artists were grouped after national schools (Italian, French, German, or English) and soon also after movements such as Symbolism, Impressionism, or Expressionism. “In Chronological Order” discards this familiar division and presents paintings from the Städel Museum from 1300 to the present in the chronological order of their making. This dense historical tour offers visitors a time travel through seven centuries of European art history, with the pictures arranged along a timeline of decisive historical events. To be found on a continuing band mounted above the paintings, the subjectively chosen political, cultural and scientific events make it possible to situate the works in their historical context and provide room for numerous associations.

The first part of the exhibition illustrates the transformation of art between the late Middle Ages and the French Revolution. This epoch between 1300 and 1800 centers the visitor’s attention on fundamental changes in Europe whose consequences also became manifest in the arts. The golden-ground panels of the late Middle Ages are followed by Netherlandish and Italian works of the fifteenth century, among them Jan van Eyck’s Lucca Madonna (ca. 1437) or Giovanni Bellini’s Madonna and Child with Sts. John the Baptist and Elizabeth (1490–1500). Whether relating to religious issues or not, these works testify to the awakening of painting as an independent and self-confident genre. The presentation includes works by German artists of the Renaissance and the era of the Protestant Reformation such as high-quality paintings by Albrecht Dürer or Hans Holbein the Younger. From the late sixteenth to the eighteenth century, Mannerist, Baroque and Rococo painters exhausted their art’s possibilities.

While some were primarily concerned with the theatrical, with light and color, others aimed at achieving a classical ideal of balance. Highlights of this period shown in the exhibition are Rembrandt’s The Blinding of Samson (1636), Antoine Watteau’s The Embarkation for Cythera (ca. 1709–1710), and Tiepolo’s The Saints of the Crotta Family (ca. 1750). The special method of hanging not only documents the compelling development of European art, but also provides opportunities for comparing unusual propinquities within the chronological arrangement. Van Eyck’s Lucca Madonna and Andrea Mantegna’s St. Mark the Evangelist (1448–1451) to be found in its immediate vicinity perfectly exemplify the artistic innovations brought about by the commercial centers north and south of the Alps in the first half of the fifteenth century. While the rules of the central perspective were discovered in Italy and Leon Battista Alberti described his contemporaries’ achievements in one of the first theoretical treatises of art history, Flemish artists around van Eyck for the first time experimented with the techniques of oil painting. Yet the rendering of architecture in the two paintings shows that, while Mantegna had mastered the mathematically correct presentation of a room in central perspective, van Eyck laid out Mary’s throne room according to his experience and the requirements of a symbolic pictorial order.

The second part of the exhibition is dedicated to the era of modern art. The Bourgeois Age was characterized by secularization, industrialization, and technological progress. Revolutions and wars brought down the political power structures of Europe. The different movements of art explored the new reality of life. While Realism strove to depict it truthfully including its negative aspects, other movements rather thematized the withdrawal from an increasingly complex outer world – into the protective four walls of the home, nature, or the depths of the human psyche. The section of nineteenth-century and modern art commences with Joseph Antons Koch’s Landscape with Noah Offering a Sacrifice of Gratitude from 1803 and concludes with Georg Poppe’s At the Garden Wall (1943). Famous masterpieces of the collection such as Max Liebermann’s Free Period in the Amsterdam Orphanage (1881), Ernst Ludwig Kirchner’s Vaudeville Theater (1909/26), or Max Beckmann’s Still Life with Saxophones (1926) are shown here. However, “In Chronological Order” is anything but a show of masterpieces.

The exhibition primarily explores the range of artistic production in different epochs and, thus, the “simultaneousness of the unsimultaneous.” In parallel with traditional salon painting, which continued into the twentieth century, avant-garde movements like Impressionism and Expressionism developed. It is this avant-garde which, as the alleged “standard,” determines our modes of perception today and has pushed a large number of artists who played an important role in the art scene of their day into the background. The chronological hanging juxtaposes salon pieces like Jacques-Émile Blanche’s Young Girl after the Fancy- Dress Ball (1906) and Ernst Ludwig Kirchner’s Nude with Hat (1910/20). This reveals surprising correspondences in the representation of the female body in spite of contrary artistic attitudes. On the other hand, two paintings showing Adam and Eve are worlds apart: while the Symbolist artist Franz von Stuck emphasized the temptation by the evil, Otto Mueller concentrated on the harmony of man and nature.

The sequence of pictures resulting from their date of production in the part of the exhibition dedicated to art after 1945 illustrates essential aspects of both the collection itself and painting after 1945: the opposition between figuration and abstraction and the extension of the classical canvas in media terms. Figurative works by Francis Bacon and Alberto Giacometti, which explore the human body and add a psychological dimension by means of painting, are followed by works of Josef Albers, Piero Manzoni, and Lucio Fontana that emphasize the support as such in its three-dimensional character and material quality.

Gerhard Hoehme’s Cimbalom from 1966, a picture box with strung painted clotheslines, is framed by two assemblages by Peter Roehr, which counter Hoehme’s gestural Art Informel “painting” by insisting on the principle of an anonymous serial order. Wolfgang Tillmans’ “abstract” photograph made without a negative is to be found next to Armin Boehm’s oil painting based on a photograph, which has largely lost its representational character in the course of the painting process and turned into an abstract surface.

General guided tours: Wednesday at 7:00 p.m., Friday at 11:00 a.m., and Sunday at 4:00 p.m.; the tour is included in the admission price; participants meet in the foyer; no registration required
Special guided tours by request: +49(0)69-605098-200, info@staedelmuseum.de
All groups interested in visiting the exhibition please register.