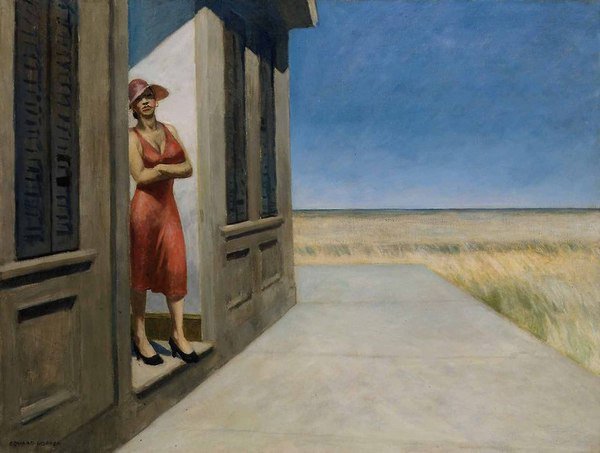 As American artists rebelled against the academic art and aristocratic portraiture that predominated at the turn of the twentieth century, they began looking to modern life for their subject matter. One of central figures in this dramatic shift was Edward Hopper, whose work is exhibited in relation to his most important contemporaries in Modern Life: Edward Hopper and His Time, opening at the Whitney Museum of American Art on October 28, 2010.

The work of Edward Hopper (1882-1967) has been presented often by the Whitney throughout the institution's history, beginning with his first-ever solo exhibition, held at the Whitney Studio Club in 1920, but Modern Life is the first Whitney exhibition to focus specifically on the context in which he worked. It follows Hopper’s evolution into America's most iconic realist painter, tracing his connections to the artistic movements that paralleled his work while also highlighting his development of a singular aesthetic that would ultimately distinguish his art from that of his contemporaries.

Modern Life begins in 1900, the year that Hopper arrived on New York’s art scene. In the exhibition's first section, his art is seen alongside the work of the Ashcan School artists, who boldly depicted the changing social and political environment of New York using rapid, loose, impressionistic brushstrokes, heavy impasto, and a dark, gritty palette. In the first decade of the century, Hopper studied with both Robert Henri and John Sloan, and quickly began to exhibit with the artists in their circle. The lessons Hopper learned from them—especially the urge to paint everyday, even mundane subjects, and a passion for capturing dramatic light effects— were immediately evident in his early paintings. Among the wealthy art patrons of the time, only Gertrude Vanderbilt Whitney would stake her reputation and fortune on the work of the Ashcan artists and their successors. Her advocacy, crucial to the flourishing of a distinctly American modernism, led to the founding of the Whitney Museum of American Art in 1930 and to the formation of the collection on view in this exhibition.

The next section of Modern Life examines Hopper's relationship to artists who painted the excitement of urban life in the "Roaring Twenties," including Guy Pène du Bois and George Bellows who, like Hopper, were students of Robert Henri and represented a younger generation of the realist school initiated by the Ashcan group. These artists, together with sculptors such as Gaston Lachaise, departed from the loose brushwork of the Ashcan aesthetic, instead using smooth curves and monumental, tubular forms to depict their figures. Purged of anecdotal detail, their compositions are balanced between the idealized forms of abstraction and the particularities of realism. Though not as stylized as the work of these artists, Hopper's paintings and prints of the 1920s share a similar approach. Works like his iconic Early Sunday Morning are drawn from observed reality and yet are devoid of characteristic details that tie them to a specific place and time. Hopper was not interested in the lively social world depicted by many of his colleagues, but he shared their interest in capturing moments of solitude and in using bold, simplified forms to infuse his scenes with dramatic monumentality.

Also explored are the connections between Hopper's art and that of the Precisionists, who began to paint American factories, skyscrapers, and machine-made structures during the 1920s. Characterized by crisp lines, hard-edged geometric shapes, and flat planes of color, the Precisionist style embodied the sense of order, logic, and purity identified with science and the machine. For many of the Precisionists, including Charles Demuth, Charles Sheeler, and Ralston Crawford, this style also reflected a desire to create a distinctly American aesthetic rooted in shared national experience. Although Hopper did not share their optimistic embrace of industry and its hard-edged aesthetic, his work of the period shares certain affinities with theirs. For Hopper, as for the Precisionists, architecture offered a means of exploring formal geometries and light effects. In Hopper's paintings of urban scenes and industrial structures, as in those of the Precisionists, the interaction between diagonal planes and expanses of light is often as much a focal point as the subject itself. Both Hopper and the Precisionists depicted recognizable subjects, but their work conveys in equal measure the desire to reduce modern architectural forms to their abstract essence.

The next section of the exhibition examines Hopper's rural paintings of the 1930s in the context of other American artists who retreated to the countryside in search of a reprieve from the commotion of modern urban life. In 1930, Hopper and his wife Jo began spending summers in Cape Cod, Massachusetts, where he painted the coastal landscape and scenes inspired by the small town life he observed there. Together with Charles Burchfield, who painted in and around Buffalo, New York, Hopper came to represent the movement known as American Scene painting. Both artists elicited from the vernacular architecture and landscapes of small town America a mood of desolation and melancholy, in part for a way of life that was rapidly being abandoned as more people moved to urban centers. For many viewers, their art captured the sturdy individualism at the heart of the American ethos, particularly during the hardships of the Great Depression.

The exhibition's final room presents Hopper's urban paintings of the 1930s alongside those of the Social Realists, including Reginald Marsh, Paul Cadmus, and the Soyer brothers, Raphael and Isaac. Hopper was friendly with these artists—all were closely allied with the Whitney Studio Club and exhibited frequently at the Whitney Museum after its opening in 1931. At the time, Hopper's depictions of city life were often associated with those of the Social Realist circle, but his images differ from the work of his contemporaries, who gravitated to the chaos and vitality of urban life in the 1930s. Unlike his peers, Hopper uses the city as a springboard for exploring moments of solitude, transforming scenes of everyday life into meditations on the human condition.

Modern Life: Edward Hopper and His Time includes approximately eighty-five works in a range of media, primarily from the Whitney’s collection, which includes more than 2,500 works from Hopper's estate bequeathed to the Whitney in 1968, and combining well-known works with rarely exhibited early paintings and works on paper. Also featured are several loans of key Hopper paintings from other museums, including The Museum of Modern Art, The Brooklyn Museum, and the Neuberger Museum of Art. Nearly all the works by other artists in the show are from the Whitney’s collection, with the exception of a John Sloan painting, The Haymarket, Sixth Avenue (1907), originally owned by Gertrude Vanderbilt Whitney, now in the collection of The Brooklyn Museum. In addition, the exhibition features a case of photographs of Hopper at work, with other artists, and at various stages of his life, drawn from the archives of the Whitney's Frances Mulhall Achilles Library.

Modern Life: Edward Hopper and His Time is accompanied by a 250-page illustrated catalogue with essays by American and German scholars, produced in conjunction with an exhibition of the same title, which appeared at the Bucerius Kunst Forum, Hamburg, and the Kunsthal Rotterdam in 2009-10.

Artists have long engaged with the mythology of Hollywood, creating a hybrid of art and cinema that has become an important strand of contemporary art. Shadow (2010), a video installation by Slater Bradley in collaboration with Academy Award–nominated cinematographer Ed Lachman, takes as its inspiration the unfinished Hollywood film Dark Blood (1993) for which Lachman was the cinematographer. In the film, River Phoenix plays a disturbed, young, half–Navajo widower who lives like a hermit near a nuclear testing site in the Nevada desert, waiting for the apocalypse and making kachina dolls that he believes have magic powers. Phoenix’s character’s wife died from radiation poisoning from the site. A married couple becomes stranded when their car breaks down in the desert and they are rescued by the widower, who falls in love with the woman. The film progresses to a dramatic ending in which the young man dies, but because of Phoenix’s own untimely death, the final scenes were never filmed.

Based on Lachman’s memories and impressions of filming Dark Blood seventeen years prior, Shadow constructs a prologue that imagines the widower’s life just before he meets the couple. Although it contains references to what takes place in the original film (now the future) and is haunted by Phoenix’s ghostly presence, major elements of the original—the couple, the car breaking down, the attraction of the widower to the woman—do not appear in Bradley and Lachman’s film, and parts of their story—the little girl, the deserted house, the bar—do not appear in the original.

The two narratives are woven together by threads of fact and fiction whose boundaries are never made clear. The bar in Shadow was the one frequented by Phoenix while filming the original movie, for example, and the location, near the Capitol Reef in Utah, is the same as in Dark Blood. The photographs found by the widower in the prologue were discovered by chance by Lachman and Bradley in the bar. They were taken in 1993 and show Lachman and Phoenix at work on Dark Blood. In a further twist, Ben Brock, who plays Phoenix as the widower, bears an uncanny resemblance to Slater Bradley. Shadow thus becomes a triple portrait of the actor, the cinematographer, and the artist, transforming a conventional cinematic narrative into a labyrinthine tale that blurs the lines between illusion and reality, past and future.