The "Transformations" exhibition shows off a variety of images of things that traverse the human and non-human - including animals, machines, imaginary creatures and bodies with different genetic compositions - will be unveiled through paintings, sculptures, video, archives and symposiums. "Catalysis for Life - New Language of Dutch Art & Design" presents instead the latest trends in the essence of Dutch art and design in which the imagination becomes naturally enlarged through the surprise and humor they express. 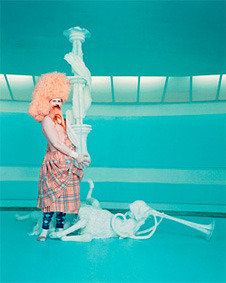 We change daily as our cells regenerate and we learn new things, as times change and we encounter new environments, and as we give play to our imagination. Under the theme "transformation," this exhibition explores the boundary between humans and non-humans. In all ages and countries, countless images and artworks have been created on the theme of transformation. Japan, in particular, is brimming with rich images on this theme, from the legends of old to the manga and anime characters of today.

So, why "transformation" now? With the spread of the Internet, the development of the global economy, advances in technology, and so on, the traditional forms "humans" take have started to become blurred, and a diversity greater than anything seen before has begun to emerge. At this exhibition, a variety of images of things that traverse the human and non-human – including animals, machines, imaginary creatures and bodies with different genetic compositions – will be unveiled through paintings, sculptures, video, archives and symposiums. Together, the "transforming" forms presented express as a single omen our hopes, dreams and fears. The artworks, created by 21 individual artists and groups from 15 countries over a period stretching from the 1980s through to the present, will demonstrate the possibilities and meanings of change today.

Tokyo Art Meeting presents a range of possibilities for new art by facilitating encounters between various genres of expression, mainly in the field of contemporary art but also including design, architecture and other specialist fields. Under the theme "transformation," the first meeting sees art encounter anthropology. Also, in cooperation with Tokyo University of the Arts, a range of displays, performances and symposiums will be held as part of Tokyo Geidai Trans Week with the aim of helping nurture future generations.

The Cape of Transformation
By Shinichi Nakazawa

The mode of our existence is being drastically transformed by hyper-technology. Nanotechnology makes it possible to etch the absolute minutest image our intellects can imagine directly onto a physical material. The processing capacity of digital information is quantifying the world to an unprecedented scale and depth. The Internet is swiftly weakening and dismantling the mode of the social intermediary, a form once most vital for human existence. Hyper-technology now has direct access to the body and the nervous system, and this unification is completely transforming the very form of existence itself.

Moreover, a critical limit has been set by hyper-technology’ s transformation of human existence. By promoting rationality, grammaticality, purposiveness, uniformity, and demystification, today’ s hyper-technology, which is in fact an extension of modern technology, has narrowed its horizon for the future, where the technology’ s tip, or “a cape of transforming existence,” touches and perceives, in one direction per avance.

We have organized this exhibition in order to point out the power of art that faces this kind of hyper-technology of today. The cape of transformation that is opening up within human existence must jut out into a sea of coincidence, multidimensionality and diversity. The ocean spray must spew out in every direction as the seawater crashes into the tip of this cape. That which sets sail from this point has no destination. As we swim through the ocean of imagination, man transforms into animal, into plant, even into unknown object.

Having first received attention during the nineteen-nineties for its avant-garde approach, Dutch design reflected the changing values of the times in which large numbers of people have become uncomfortable with the mass-consumer society, and it is now recognized as the world leader in design trends. It presents a new set of values that are the opposite of the twentieth century concept of design which pursued amenity and functionality.

Often described as conceptual, Dutch design is both affirmative and respectful of human life, it is based on an awareness of contemporary problems, such as ‘the environment and consumption’, ‘urban and social systems’, and ‘the continuation of history and culture’, while questioning our choices for the future. In this exhibition we will feature the work of artists/designers whose work questions the relationship between people and objects or interpersonal communications, such as designers Ted Noten (contemporary jewelry), Maarten Baas (product design), and artists Martijn Engelbregt and Tomoko Take.

Their works can be said to act as a catalyst, bringing about a dynamic chemical transformation in our attitudes to life. Including some of their most recent works, this exhibition presents the latest trends in the essence of Dutch art and design in which the imagination becomes naturally enlarged through the surprise and humor they express.