The Marathon Marathon project in Athens

During the 24-hour event of the Serpentine Interview Marathon, Rem Koolhaas and Hans Ulrich Obrist interviewed seventy-two leading cultural figures based in London, mapping the city through conversations with the protagonists who inhabit it. Obrist conceived this as a transdisciplinary model to create a platform for the production of new realities. 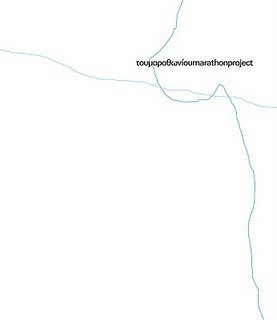 The Marathon Marathon Project (hereinafter τουμαραθωνίουmarathonproject), takes place in Athens at the Acropolis Museum on October 31, 2010 under the auspices of the Ministry of Culture and Tourism.

The project takes as its point of departure the impressive international array of marathon-format events and in particular “The Marathon Project”, which curator Hans Ulrich Obrist conceived in Stuttgart in 2005. Obrist conceived this as a transdisciplinary model which, as György Kepes said, tries to go beyond the fear of pooling knowledge in order to create a platform for the production of new realities.
This format was then launched in 2006 at the Serpentine Gallery, as the Serpentine Gallery Interview Marathon, the fruit of a collaboration with Serpentine Gallery director Julia Peyton-Jones, who in 2000 conceived of the annual Pavilion commission, the world’s first and most ambitious architectural project of its kind.

During the 24-hour event of the Serpentine Interview Marathon, Rem Koolhaas and Hans Ulrich Obrist interviewed seventy-two leading cultural figures based in London, mapping the city through conversations with the protagonists who inhabit it. The Interview Marathon aimed to formulate new ways of mapping or charting the activities of a city while acknowledging its perennial mutability. Similarly, the Experiment Marathon in 2007 (with Olafur Eliasson) mapped the interface between art and science, while the 2008 Manifesto Marathon charted artists’ relationships to politics, polemics and poetics, a theme which was further explored in the 2009 Poetry Marathon and the recent Map Marathon in 2010.

The apparent tautology in the title of the Athens event comes from the fact that τουμαραθωνίουmarathonproject —the “Marathon of the Marathon” —is being held as part of the celebrations of the 2500th anniversary of the Battle of Marathon and the organization this year of the Golden Marathon. This meta-Marathon, the discourse about the Marathon, provides an opportunity to creatively re-link the message of the Marathon not only to its place of origin but also to the numerous places around the world where this message was relayed and multiplied.

The project is being realized at a historical conjuncture which is proving to be decisive for re-shaping the broader features of Greek society and culture. The event explores such topics as the new understanding of humanism that has emerged within contemporary culture, the re-interpretation of innovation in a globalized world of hybrid realities, and the role of the arts in the memorization of the past, present and future. Other topics include the renegotiation of the idea of the Other (which comes to the fore in the Battle of Marathon itself and in Aeschylus’s Persians) and the symbolic transformation of Pheidippides from soldier to warrior-runner.

Artists, writers, poets, philosophers and scientists from Greece and abroad take part in τουμαραθωνίουmarathonproject, which is being curated by Hans Ulrich Obrist and Nadja Argyropoulou.

The proceedings will be published in book form and distributed internationally.
The Marathon Marathon or τουμαραθωνίουmarathonproject, is being organized by the non-profit, cultural initiative, Saprofyta and realized in cooperation with the DESTE Foundation for Contemporary Art and the Acropolis Museum.
The Marathon Marathon is organized under the auspices of the Ministry of Culture and Tourism and has been made possible with the support of OPAP S.A.

The curators and the organizers would like to extend their thanks and appreciation to those who, through their support and cooperation, have made the Marathon Marathon project possible:

The Greek Ministry of Culture and Tourism
OPAP S.A.
DESTE Foundation For Contemporary Art
The Acropolis Museum
All participants
Friends and collaborators who have contributed with ideas and shared information