For Salon: Tania Candiani will present a selection of her recent works related to text, memory andsocial-practice research; Christian Schmidt-Rasmussen will present a new work: Untitled (I am posting a letter by throwing it out of the window...), a wallpainting made with chalk. On Saturday, November 6th The International Studio & Curatorial Program (ISCP) announce its Fall Open Studios, a four-day exhibition of international contemporary art. This event presents works by the 38 artists, collectives and curators from 26 countries currently in residence at ISCP. 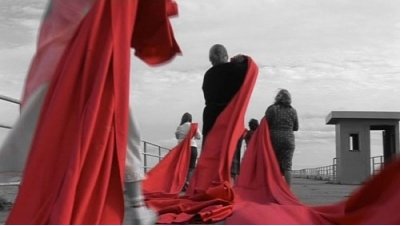 Tania Candiani lives and works in Mexico City and Tijuana, and will present a selection of her recent works related to text, memory andsocial-practice research. Candiani has been developing urban interventions projects where textiles, texts and actions, along with the experiences of the people with whom she works become the detonators ofthe artwork.

At the moment, she is working on a site-specific project entitled Classic Six/ Apartment Buildings, a multi-disciplinary body of work based on buildings that were emblematic during a particular historical moment in New York City, marking a change in housing tastes and trends by the wealthy. Using architectural plans as a point of departure, Candiani investigates thesculptural elements of architecture, image making, invention, andmemory. Accompanying the talk, Candiani will present a video and a one-daywall installation entitled Ruta Crítica.

Christian Schmidt-Rasmussen lives and works in Copenhagen, Denmark and will present a new work: Untitled (I am posting a letter by throwing it out of the window...), a wallpainting made with chalk and paint in his studio. Schmidt-Rasmussen has been working on the piece during his time at the ISCP, following a theme from his most recent exhibition Daywalker Let go at Overgaden Gallery, Copenhagen. In the exhibition, Schmidt-Rasmussen presented a series of new paintings installed upon black walls, on which small texts were written. A diary written by a vampire, who is the artist himself, was also a part of the exhibition. Schmidt-Rasmussen presented stories from his own neighbourhood in Copenhagen, which represents a classic terrain vague, as well as the rest of Copenhagen and Denmark. Schmidt-Rasmussen's paintings communicate atmospheres in which the everyday and the trivial are illuminated by the poetic presence of color and glitter, but also by a melancholic darkness.

The International Studio & Curatorial Program (ISCP) is pleased to announce its Fall Open Studios, a four-day exhibition of international contemporary art. This event presents works by the 38 artists, collectives and curators from 26 countries currently in residence at ISCP and offers the public access to innovative contemporary art practices from around the world, seen for the first time in New York City. Open Studios also provides an exceptional opportunity to engage with the production, process and archives of artists and curators working with a diverse range of mediums, approaches and concepts.

Opening alongside Open Studios, Factory Makers, curated by Kari Conte initiates a four-part exhibition over the next year that takes ISCP's site of production – a historic printing factory – as the starting point to reflect on the changing nature and idea of work in society and how we define labor today. This exhibition presents seven international artists who address the impact of the world's rapidly changing economies on new social and cultural realities. Through various approaches, the included works consider the effect of globalization, new modes of 'outsourced' production and the blurring boundaries of material and immaterial labor. Artists include Matei Bejenaru (Romania), Factory of Found Clothes (Russia), Cao Fei (China), Chen Chieh-jen (Taiwan), Jean-Marc Superville Sovak (USA), Stephanie Syjuco (USA) and Mladen Stilinović (Croatia).

On Saturday, November 6th at 4 pm, ISCP curator-in-residence Svetlana Kuyumdzhieva, will present different kinds of artistic engagements from the Bulgarian art community and will show works presented in her recent projects. On Sunday, November 7th at 4 pm, ISCP curator-in-residence Elisabeth Byre, will present her curatorial practice through some recent exhibitions focusing on performance art and time-based media.

ABOUT ISCP: The International Studio & Curatorial Program (ISCP) is a premier residency-based contemporary art center in the United States for emerging to mid-career artists and curators from around the world. Founded in 1994, ISCP has hosted over 1,000 artists and curators from more than 50 countries, including the United States. In 2008, ISCP moved from Manhattan to East Williamsburg, Brooklyn to the former factory of the Sackett & Wilhelms Lithography Company, an 18,000 square-foot building constructed in 1901. This move expanded ISCP's facilities to 36 studios, an exhibition gallery and a project space. ISCP strives to establish a global network of exemplary artists and curators and to provide them with support for producing new work. Tailored for professional growth, the program serves as an active mediator, creating visibility and immersion for its residents in New York City.