A group exhibition on the theme of humanity's relationship to bodies of water in the Anthropocene era. The selected artists design adaptive ecosystems and pose strategies for the survival of non-human life in ever-changing liquid ecologies. A series of public programs will accompany the exhibition. 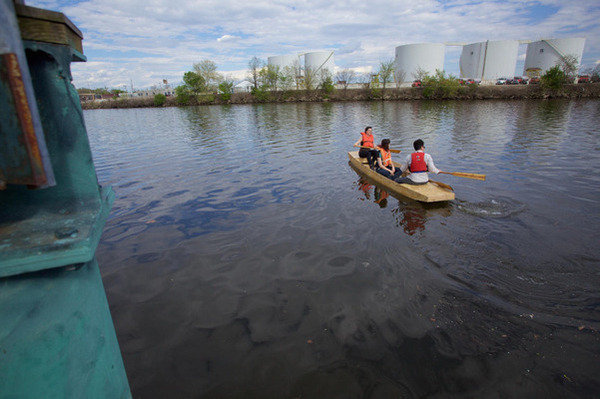 curated by ISCP Director of Programs and Exhibitions Kari Conte

The International Studio & Curatorial Program will begin its 2015-16 exhibition season with Aqueous Earth, a group exhibition of art that reconsiders humanity’s relationship to bodies of water in the man-made Anthropocene era.

Curated by Kari Conte, the focus of Aqueous Earth departs from the subject of Newtown Creek, a channelized estuary and Superfund site in close proximity to ISCP. Once the busiest waterway in New York City, heavy industrial usage has transformed Newtown Creek into an ecological catastrophe. Mirroring the issues pertaining to the creek’s degradation, the exhibition presents the work of artists who apply multidisciplinary and speculative research to design adaptive ecosystems, find new sources of energy, and pose strategies for the survival of non-human life in ever-changing liquid ecologies.

Artworks in the exhibition include Brooke Singer’s Toxic Sites US Project (2007-15), an online data visualization and media-sharing platform about the worst toxic sites in the United States, including hundreds of rivers, creeks and lakes that are Superfund sites. Lara Almarcegui’s Guide to the Wastelands of Flushing River (2010), focuses on the “empty gaps”—urban ruins and detritus—found along most of the expanse of the four-mile Flushing River in Queens, New York.
The artist’s guidebook and slideshow traces the history and redevelopment of this long-neglected terrain. An Ecosystem of Excess (2014), an installation by artist and researcher Pinar Yoldas imagines how amphibious species can biologically adapt their organs to metabolize plastic in the Pacific Trash Vortex, a floating mass of plastic waste in the Pacific Ocean.
In the project, Yoldas asks: “If life started today in the oceans of plastic, what kind of life forms would emerge out of this contemporary primordial ooze?” In What Wilderness: 9 Conversations on Ecology, Abstraction, and the Anthropocene, Dylan Gauthier will be taking on the role of an urban wilderness explorer, and build a 16-foot plywood boat at ISCP with the collective, Mare Liberum, to carry invited guests and the public down Newtown Creek to investigate its industrial past and post-natural present. These early morning conversations on the water will be transcribed and available for visitors to the exhibition.
In Ghosts of the Gulf (2014), a photographic series by Brandon Ballengée, the artist looks at the BP Deepwater Horizon (DWH) oil spill that happened in 2010, an epic environmental disaster in the Gulf of Mexico that has severely impacted its marine life. In Amphibious (Login-Logout), Allora & Calzadilla depict turtles floating down the Pearl River Delta on a log, watching their habitat become increasingly industrialized and less hospitable to non-human life.

Exhibition support is provided by The Andy Warhol Foundation for the Visual Arts, National Endowment for the Arts, The Greenwich Collection and the New York City Department of Cultural Affairs.

Threefold (through November 22) presents an interactive installation of ISCP alumna Natasha Johns-Messenger's work, curated by Melissa Bianca Amore, which directly disrupts the spatial continuity and perceptual reading of the off-site project in El Museo de Los Sures' space. The site, a street-level gallery on the ground floor of an apartment building in Williamsburg, Brooklyn, is the focus of the artist's investigation, both as a subject and a pictorial object. Furthering her study of phenomenology, spatial awareness and the psychology of perception, here Johns-Messenger creates a new site within the site, employing common architectural and perceptually charged materials: mirror, peepholes and live projections.

Obtuse View (through October 31) presents work by Lourdes Correa-Carlo in ISCP's Project Space. Correa-Carlo considers recurrent themes of access, alienation, disparity, and the forms that represent these conditions. She observes her own physical and psychological relationship to the built landscape and the movement of her body through public spaces.