The Arcadian Modern. The exhibition spans the first half of the 20th century, surveying artist's (Uruguay, 1874-1949) remarkable achievements in painting, sculpture, fresco, drawing, and collage through some 190 works. 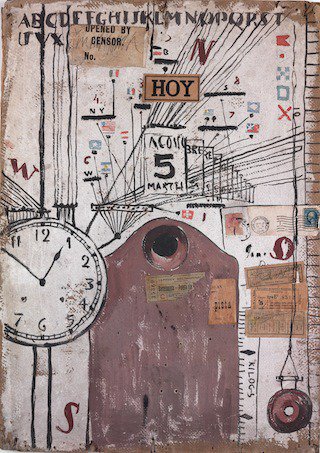 With Joaquín Torres-García: The Arcadian Modern, The Museum of Modern Art presents the first major U.S. retrospective devoted to the artist in 45 years. The exhibition spans the first half of the 20th century, surveying Joaquín Torres-García’s (Uruguay, 1874–1949) remarkable achievements in painting, sculpture, fresco, drawing, and collage through some 190 works.

Joaquín Torres-García: The Arcadian Modern stresses the radical individuality of an artist who eluded classification. A central figure in the history of modernism in the Americas and a key protagonist in the transatlantic cultural exchanges that have informed it, Torres-García has fascinated generations of artists on both sides of the Atlantic, but most notably in the Americas—including major North American artists from Barnett Newman to Louise Bourgeois, and countless Latin American artists. While assimilating and transforming the formal inventions of modern art, Torres-García stayed true to an understanding of time as a collision of different periods rather than a linear progression—a distinction that is particularly relevant to contemporary art.

The exhibition is a chronological display structured in a series of major chapters and embracing the artist’s entire oeuvre, from his early works in Barcelona at the end of the 19th century to his final works, made in Montevideo in 1949. Two key moments are emphasized: the period from 1923 to 1933, when Torres-García participated in various European early-modern avant-garde movements while establishing his own signature pictographic-constructivist style; and 1935 to 1943, when, having returned to Uruguay, he produced one of the most striking repertoires of synthetic abstraction.

Organized by Luis Pérez-Oramas, The Estrellita Brodsky Curator of Latin American Art, with Karen Grimson, Curatorial Assistant, Department of Drawings and Prints, MoMA.
Major support for the exhibition is provided by Patricia Phelps de Cisneros and Gustavo Cisneros, the Gradowczyk Family, and Estrellita and Daniel Brodsky.

Additional support is provided by the MoMA Annual Exhibition Fund.

Support for the publication is provided by The International Council of The Museum of Modern Art.

SYMPOSIUM:
January 28, 2016, 1:00–5:00 p.m. Titus Theater 3 (The Celeste Bartos Theater)
Organized in conjunction with the exhibition Joaquín Torres-García: The Arcadian Modern, this symposium brings together artists and scholars to explore central works and key themes in the exhibition, including Torres-García's compelling appeal for a specifically Latin American form of modernity, and his influence on contemporary practice.