The Direct Art exhibition shows that the Viennese artists back then also had their fingers on the international pulse of the times. Comprising around 120 works - mainly from the MUMOK collection - it casts light on the specific positions of the Viennese Actionists in the international context of the art of the 1950s and 1960s which was concerned with reality, bodies, and society. The precarious installations of Nina Canell could be read as essays on changeability and uncertainty. Hinged upon a fabric of electromagnetics, her communities of objects quietly interact with each other through modest arrangements, balancing careful ambitions to sustain certain frequencies, movements or altitudes. 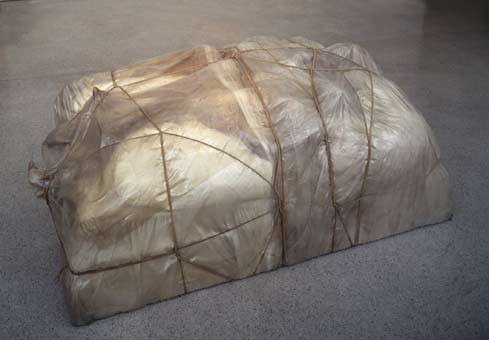 Viennese Actionism was one of the most radical artistic movements of the 20th century and even today it has lost none of its brisance. At the beginning of the 1960s Günter Brus, Hermann Nitsch, Otto Muehl, and Rudolf Schwarzkogler broke down the borders of painting in favour of actions in time and space involving real bodies, objects, and substances. With their artistic form they were concerned with creating an intensified and thus consciousness-generating “direct” confrontation with experiential reality–both sensory and psychological–in all its aspects including the tragic, the difficult-to-bear and the socially repressed. The “Direct Art” exhibition in the MUMOK shows that the Viennese artists back then also had their fingers on the international pulse of the times.

Comprising around 120 works–mainly from the MUMOK collection–it casts light on the specific positions of the Viennese Actionists in the international context of the art of the 1950s and 1960s which was concerned with reality, bodies, and society. The confrontation with examples from Gutai, Nouveau Réalisme, Fluxus, Pop Art, and Happening makes it clear that despite acting in the “off” of the international art world, the Viennese artists were not only at the centre of current discourse as far as the issues were concerned but, with their taboo- breaking acts–especially those related to the human body–they even occasionally outdid their contemporaries in radicalness and consistency.

Chronologically structured, the show is sub-divided into five thematic stations which corresponded with the development of Viennese Actionism and confront it with its forerunners and parallel positions but additionally points out its role as the pioneer of later developments.

Breaking with the easel painting
At the beginning there are the works by Nitsch, Muehl, Brus and Schwarzkogler with which they accomplish their breach with easel painting. These are confronted with examples of the opening up and extension of the pictorial surface by Allan Kaprow, Robert Rauschenberg, Niki de Saint Phalle, Piero Manzoni, Lucio Fontana, and Shozo Shimamoto.

Documentation of earlier works involving the human body can also be seen: representatives of the Japanese Gutai movement such as Saburo Murakami or Kazuo Shiraga worked with their own bodies as early as 1955, Yves Klein worked with “living brushes”, the American artist Carolee Schneemann integrated her naked body in environmental and painterly stagings.

Material pictures and material objects, staged photographs The next area of the exhibition is devoted to the material pictures and objects of the Viennese Actionists as well as the body and object arrangements for photographs that bear a similarity to still lifes. These are placed in association with contemporaneous works by Nouveau Réalistes–including Jean Tinguely’s scrap sculptures, Daniel Spoerri’s trap pictures, or Christo’s wrapped objects–but also early assemblage sculptures by the American artist Bruce Conner and one work by Joseph Beuys.

Music
The significant role of music in Viennese Actionism is an aspect that has been almost completely, and unjustly, ignored till now. “Direct Art” is presenting the atonal music but also the very special musical notations used by Günter Brus, Otto Muehl, and Hermann Nitsch as well as composer Anestis Logothetis who worked closely with the Viennese Actionists. This is contextualized using acoustic works and scores by John Cage, Nam June Paik, and other Fluxus artists but also with musical examples by Edgar Varèse and Pierre Boulez.

Social-political commitment
In the second half of the 1960s political and/or socio-critical aspects took centre stage in the artistic work of the Viennese Actionists. A comparison of the “Vietnam Party” action (1966) or the legendary “Kunst und Revolution [Art and Revolution]” event (1968) with works by Wolf Vostell–including a relict of his happening, “Miss Vietnam”, (1967)– makes it clear just how much artists at the end of the 1960s were major players and co-initiators of movements for social transformation. Their reflections on mass culture phenomenon are also addressed.

Body analysis approaches The final section of the exhibition is dedicated to body analysis approaches which were central to Viennese Actionism at the end of the 1960s. Rudolf Schwarzkogler’s later works or Günter Brus’s last, extreme action are being shown together with works by Bruce Nauman and John McCarthy as well as works of emerging feminist body art from the period such as that by VALIE EXPORT or Gina Pane.

“Direct Art”
The exhibition title quotes the term invented by Otto Muehl and Günter Brus in 1966 for the activities of the Viennese Actionists. The artists considered the term as being more precise in its description of the varied aspects of their interaction with bodies and objects from the “real” world than the then generally current term “happening” which was mainly applied to activity-based art forms. They also chose the term with their participation in the “Destruction in Art Festival” in London (1966) in mind, their first and extremely successful joint appearance on the international stage. There, Günter Brus, Otto Muehl, and Hermann Nitsch appeared, along with Peter Weibel and filmmaker Kurt Kren, as the “Vienna

Institute for Direct Art”.
The “Direct Art” exhibition is part of the continuing series of collection shows that began in 2002 and present Viennese Actionism from varying perspectives.

In 2011 a seminal publication by Eva Badura-Triska and Hubert Klocker on Viennese Actionism will be appearing in Verlag Walther König.

The precarious installations of Nina Canell (born 1979 in Växjö, Sweden, lives and works in Berlin, Germany) could be read as essays on changeability and uncertainty. Hinged upon a fabric of electromagnetics, her communities of objects quietly interact with each other through modest arrangements, balancing careful ambitions to sustain certain frequencies, movements or altitudes. Electrical debris, wires and neon gas establish temporary, almost performative sculptural unions with natural findings such as water, wood or stones, yielding open-ended moments of synchronicity. An improvisational methodology and a flexibility of form highlight Canell's quest for sculpture, which exists somewhere in between the material and the immaterial, forming and questioning the conductive relations between solid objects and mental events.