Without You I'm Nothing

Art and Its Audience. The exhibition comprises works drawn from the MCA's Collection that demonstrate a cultural shift towards a greater engagement for the individual in the public realm. With works by Vito Acconci, Carl Andre, Michelangelo Pistoletto, Richard Serra and many more. 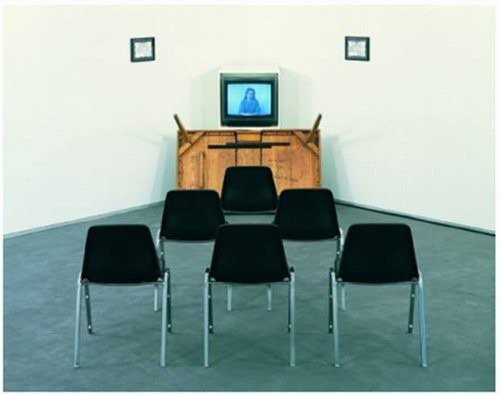 Over the past fifty years, artists have increasingly engaged the presence of the audience in the conception, production, and presentation of their work. Without You I'm Nothing comprises works drawn from the MCA's Collection that demonstrate a cultural shift towards a greater engagement for the individual in the public realm.

Beginning in the 1960s, artists such as Carl Andre and Richard Serra used industrial materials to create sculptures that left behind the traditional pedestal to enter the "real" space of the viewer, producing a new understanding of how work could be experienced. This engagement of the viewer was extended in a more performative way in the 1970s with the work of Dennis Oppenheim -- whose figurative sculptures are often triggered to move based on the movements of the audience -- and Michelangelo Pistoletto, whose mirrored works combine figurative renderings with the viewer's reflected image.

Vito Acconci, Chris Burden, and Bruce Nauman also emerged during the 1960s and 1970s with work that frequently required the direct participation of the viewer to complete them. Their work had a profound influence on artists who came to prominence in the 1990s and 2000s such as Liam Gillick, Gabriel Orozco, Dan Peterman, and Andrea Zittel, whose multidimensional work invoked the interaction of the audience to reflect the manner in which architecture and internet technology have encouraged a more networked social sphere. In recent years, even artists working in film and video, such as Aernout Mik, have rejected the idea of theatrical spectatorship, framing their cinematic narratives within architectural and sculptural presentations that the viewer must walk around to fully appreciate.

Complementing the objects on display, a program of performance-based works are presented in the galleries over the course of the exhibition, further emphasizing the critical importance of interactivity and the physical relationship of the viewer to the experience of contemporary art. Without You I'm Nothing: Art and Its Audience is co-curated by Chief Curator of the Contemporary Art Museum St. Louis Dominic Molon and Associate Curator Tricia van Eck.