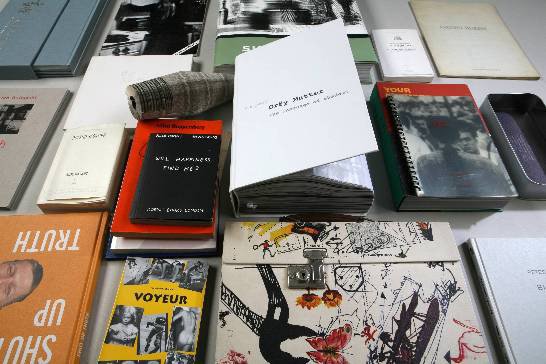 It contains works by a number of important representatives of the avant-garde of the 1960s and 1970s and later. Artists and writers in the collection include Vito Acconci, Ben, Christian Boltanski, Daniel Buren, Hanne Darboven, Alfredo Jaar, Lucy Lippard, Mangelos, Annette Messager, the OHO group, Iztok Osojnik, Vesna Črnivec, Dušan Pirih Hup, Zora Stančič, and others. The 25th Biennial of Graphic Arts, in 2003, which focused on the concept of the artist-produced publication, contributed greatly to the expansion of the collection, as did several donated archives (the FV archive, Milena Kosec’s Scarecrow Statelet archive, publications from the group museum in progress, the hybrid periodical Point d’ironie, and others).

The twentieth-century phenomenon of the artist’s book, which developed in the ideological context of the 1960s, became a major democratic project for artists, since convenient and inexpensive book publications were a good way to embody the dematerialization of art projects, promote new creative forms, and spread new ideas. The idea of the book, its form, communicative ability, and reproducibility are attractive to artists; also, the book offers artists numerous colourful and diverse ways to approach it: photography, film, assemblage, print, drawing, sound recording, etc. But how does one separate books that are works of art from all other books and publications that, in one way or another, have been authorized by artists? The history of the artist’s book is marked by many explanations and efforts to find suitable definitions for the phenomenon. The artist’s book introduces a new model of interaction between the artist, the book, and the public; it creates an active reader/viewer. It is a means of expression for the artist, a work of visual art, a disseminator of ideas, and an object of communication.

Through their art projects, reactions, interpretations, new art production, and gallery and museum installations, the invited artists have created new meaningful groupings of works chosen from the Centre’s collection of original publications and artists’ books. Each artist, after researching and examining the Centre’s holdings, chose one or more artworks, which then became the basis for their thinking about what they wanted to do in the gallery space; at the same time, these works gave rise to reinterpretation by the artists’ own projects, which were realized exclusively for this exhibition. The invited artists have been placed in the role of designers of installations of museum objects. What has emerged are new starting points, in terms of both content and theory, for understanding not only the artist’s book, but also museum and gallery work, the presentation of exhibits, their interpretation, and the actualization of museum collections .

Accompanying the exhibition is a 70-page illustrated catalogue in Slovene, with texts by Božidar Zrinski (“With Artists on the Collection”) and Breda Škrjanec (“Is This a Book? A Brief Stroll through the History of the Artist’s Book”), a list of works from the collection, and statements by the participating artists.

Supported by the Ministry of Culture of the Republic of Slovenia and the Municipality of Ljubljana. The exhibition is part of the programme Ljubljana, The World Book Capital City 2010.
Exhibition sponsor: Lek, d. d.