In this solo exhibition by the sculptor Sailstorfer an installation is brought together with a series of other works by the artist. Central to the show 'Forst' is the motif of the woodland, which has always been an unfailing source of attributions of all kinds. In the exhibition 'Ich bin selbst nur ein Aufnahmeapparat' Koester presents a series of films and photographs from the previous seven years which deal with the human body and geographical places as expressions of lost or suppressed history. 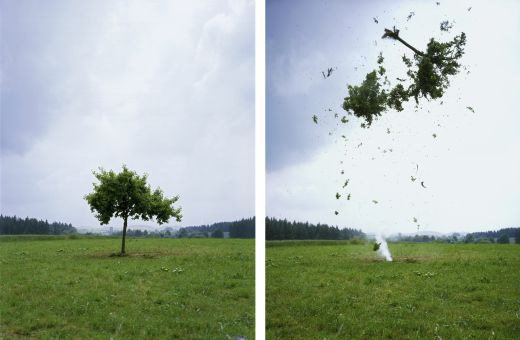 In this solo exhibition by the sculptor Michael Sailstorfer (*1979 in Velden | Vils) a spectacular installation, specially produced for the kestnergesellschaft, is brought together with a series of other works by the artist.

Central to the exhibition Forst is the motif of the woodland, which has always been an unfailing source of attributions of all kinds: from a romantic haven of calm, to a realm of terrifying darkness, to the epitome of homeland. The works presented in Forst refer in various ways to the idea of clearing, yet dissolving the literal meaning of the term: while the installation from which the exhibition draws its title grotesquely reverses and accelerates the natural effects of the seasons, in Schwarzwald (Black Forest) the viewers witness a live transmitted image of a different kind of erosion.

Through the artistic transformation of everyday objects and places, Michael Sailstorfer creates tangibly poetic images dealing with the states of euphoria to disintegration. Absurd failure and tragicomedy play as important a part in his work as the question of the space a sculpture is able to occupy: sometimes the viewers' senses of hearing and smell are attacked. Sailstorfer's often processual and theatrical works also operate within the tension between such contradictory concepts as homeland and remoteness, mobility and standstill, noise and quite, or light and darkness. Destruction, recombination, and transformation are his basic compositional principles. Despite the vehemence of his artistic metamorphoses, Sailtorfer's works always have a characteristic background melancholy.

The exhibition is accompanied by the monograph "Michael Sailstorfer: S" published by DISTANZ-Verlag, which presents Sailstorfer's work from 2000 to 2010. It is edited by the kestnergesellschaft and its partner institutions S.M.A.K. Ghent (Belgium) and the Kunsthalle Nürnberg, who will present solo exhibitions by Sailstorfer in the coming year. The volume contains texts by Veit Goerner, Philippe van Cauteren, Ellen Seifermann, Martin Germann, Thomas Caron, Michael Sailstorfer, Kristin Schrader and Birgit Sonna.

In his solo exhibition Ich bin selbst nur ein Aufnahmeapparat the Danish artist Joachim Koester presents a series of films and photographs from the previous seven years which deal with the human body and geographical places as expressions of lost or suppressed history. His search for these histories is described by the artist as "ghost hunting" – the seeking out and recording of forgotten persons, things, and places is a central impetus to Koester's oeuvre.

Alongside well known works such as Pit Music, The Kant Walks and Tarantism, a new film work has been produced on the occasion of this show. For the title of both this film and the exhibition I Myself Am Only a Receiving Apparatus Koester quotes a letter of Kurt Schwitters from 1939. In the film, a man performs minimal quivering movements in the reconstruction of Schwitters' Merzbau in the Sprengel Museum Hannover. The mime's body as well as the room – lit as an expressionistic film set – will fuse in an attempt to map the altering psychic and historic territories that seem hidden behind the semi-abstract surfaces of the architecture.

Joachim Koester (*1962 in Copenhagen, lives in Copenhagen and New York) took part in documenta X in 1997 and the Venice Biennale in 2005. He has presented solo exhibitions at Capacete Projects in Rio de Janeiro, the Palais de Tokyo, Paris, the Museo Tamayo in Mexico City, and elsewhere. His works can be found in the collections of the Metropolitan Museum of Art and the Museum of Modern Art in New York, the Statens Museum for Kunst in Copenhagen, the Moderna Museet in Stockholm, among others.

A catalogue will be published in cooperation with If I Can't Dance, I Don't Want To Be Part Of Your Revolution, Amsterdam, in January 2011 with contributions by Magali Arriola, Frédérique Bergholtz, Yann Chateigné Tytelman, Veit Görner, Martin Germann, Joachim Koester, Linda Norden, Marco Pasi and Kristin Schrader.

The kestnergesellschaft is supported by the state of Lower Saxony.

kestnergesellschaft
Goseriede 11 30159 Hanover
Opening hours: Tuesday through Sunday and on holidays 11 am to 6 pm
Thursday 11 am to 8 pm