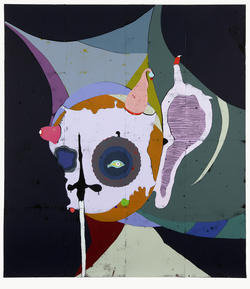 Comprising 30 positions, the show devises a panorama of a generation guided by communal interest in specific themes following on from established historic trends in the Rhineland, ranging from ZERO Kunst to the postmodern protagonists from the 1980s: out of the rejection of a remote ironic attitude, which characterised both social as well as the discourse within art since the 1980s, a new inclination towards seriousness and engagement, but also humour, began to develop. While the generation of their "teachers" was confronted by a world whose antiquated, polarised systems of power were is dissolution, those individuals born in the 1970s grew into a world in which globalisation and an unfettered capitalism constituted the status quo. If 1980s artists reacted to the fundamental transformation of their social system by using the repeated disjunctures and mirrorings of irony, it would seem by contrast that cutting "ambiguity" has become something of a blunt instrument in the stylistic arsenal of a new generation of artists at the start of the twenty-first century.

Applied thematic approaches, such as the orientation towards people, their corporality as well as their utopian ideals, determine the scope of today's artistic enquiry. In this connection, the post-ironists try out traditional methods in a new way: they concentrate their energies on more marginal media such as ceramics, woodcuts or silhouettes and endeavour to find a natural, at times emphatically craftsmanlike engagement with their chosen materials, their characteristics and qualities, as well as metaphorical dimensions. The artists in question approach their subject matter—which for its part may well be geared towards selected modernist positions—in post-ironic fashion and in an artistic process characterised by seriousness. Deploying a large number of diverse media—ranging from painting, photography, collage, via installations, sculptures and spatial interventions, all the way to video and animation—the exhibition traces the manifold strategies of post-ironic thinking. Although the works refrain from using irony, they are by no means devoid of humour: indeed, it is at this very threshold between irony and humour that the presentation generates its thesis regarding a new artistic generation in the Rhineland, which, as the leading location for art training and the most dense regional concentration worldwide of cultural institutions, possesses unique status as a barometer of international developments.

The opening takes place on Sunday, the 28th November 2010 at noon.